It was particularly hot on July 6th. I remember it because I spent most of the day outdoors, campaigning for the election of women to their communal administrations.

On Tuesday, 5th April, the third and final round in this cycle of elections for members of the communal administrations in Jerusalem will be held. It is a complicated electoral process to enable members of the public a direct voice in their local governance. The communal administrations manage community centers, including activities for children, youth and the elderly, they design and maintain playgrounds and other public spaces and they initiate programs for local residents to celebrate their neighborhoods or to mark national holidays.

These programs and activities are funded through the taxes we pay to the Jerusalem Municipality, dispersed and managed community by community. A strong communal administration is able to secure high levels of funding for its residents; a weak one, less.

Two thirds of Jerusalem’s neighborhoods have already held elections for their representatives for the next five years. The neighborhoods of French Hill, Gilo, Ganim, the City Centre, Meitarim and Ramat Shlomo are still to vote.

Consequently, most residents don’t vote, even though the administrations affect their daily lives directly. In most neighborhoods, Haredim (the ultra-Orthodox) do vote. Their Rabbis tell them for whom to vote and they do what they are told.

This means that many neighborhoods have a disproportionate number of Haredim making decisions on behalf of all residents. There is nothing illegal in this and it is not a criticism of Haredim. All residents can vote. If they don’t, either because they are uninformed or because choose not to, they bear the consequences. This is politics and politics is about out-maneuvring your opponents – which many Haredi leaders do with finesse.

Our communal administrations are supposed to represent us. Often, they don’t.
Women are the most underrepresented. Until this current cycle, just 14% of elected representatives to the administrations were women. Women were unlikely to run for election and, as happened in the previous two rounds in this cycle, even if they chose to run, they could be forced to pull out by political deals between men.

In this cycle, we – a combination of initiatives by the Jerusalem Municipality and civil society, including my own Kiverstein Institute – have managed to raise the number of female candidates. However, we are nowhere near fully represented.

In neighborhoods where there is a quota for female representation – something which the Municipality encourages but does not enforce – Haredi women increasingly take the places. Their Rabbis may not allow women to participate in national politics but when they know that there must be a woman elected, they would rather it was one of their own. In some cases, they must believe that they will be able to control her; at very least, her priority will be her own community.

I spent most of the day in the previous round in a neighborhood in Jerusalem where there were three female candidates. Two of them were community activists. One represented the Ethiopian community and had worked vigorously for their welfare. The other had served the community through voluntary work and activism on behalf of disadvantaged residents.

These two wonderful women were not elected. How could that be?

For the first part of the day, I urged people who were coming to the polling booth to vote for women, showing them the dreadful statistics and making the case that a woman’s perspective would be different from a man’s, so it was important that they be included in decision-making. To my surprise, most people said they agreed and that they would be voting for a woman.

Later in the day, I went to the local shopping strip. There, I asked people to go to vote (a few meters away). I urged them to exercise their democratic right and privilege. I also suggested that while they were there, they should consider the underrepresentation of women.

The response I had was mostly negative. People said they were not interested. Some Haredi women argued with me, saying that they preferred men to make the decisions. Many residents did not speak Hebrew (or English) and did not have any idea that elections were taking place a few meters away from them.

In this neighborhood, a woman was elected: a Haredi woman with no record of community service at all. She was the woman whom the Rabbis said should be elected.

Will that scenario be repeated in this round, in these neighborhoods?

We know that two of the neighborhoods do not have a quota for women and will be happy if none are elected. We know that they same issue of Haredi Rabbis putting up candidates whom they believe they can control is happening in other neighborhoods.

I am here to tell you the good news. There are some wonderful, energetic, committed and principled women running for election. 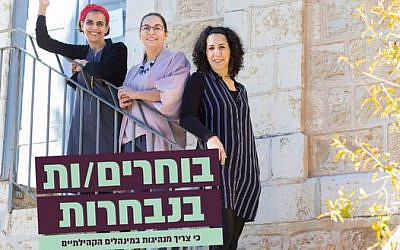 If you live in a neighborhood where elections are being held, why not try to make a difference? Go out and vote for them!