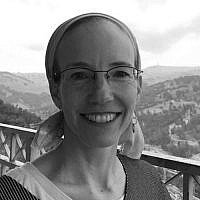 The Blogs
Karen Feuer
Apply for a Blog
Please note that the posts on The Blogs are contributed by third parties. The opinions, facts and any media content in them are presented solely by the authors, and neither The Times of Israel nor its partners assume any responsibility for them. Please contact us in case of abuse. In case of abuse,
Report this post.

I am hesitating right now before telling a very difficult story. It is the story of the atrocious cruelty suffered by 27 survivors of sex trafficking who have found a home in Israel. I hesitate because it is so incomprehensible, so difficult and disturbing to imagine, that I am reluctant to share the details with anyone. My hesitation has another source as well. I am uncertain how this story will be received in my community, the national religious world. The underlying issues are rarely topics of conversation in my neighborhood – human trafficking, torture, foreigners in Israel. We don’t speak about these things. Nonetheless, there are moments in life when one has to make a decision, regardless of any difficulty it presents. I have decided to tell this story because at the end of the day a Jewish heart beats within me, and I have faith that in this wondrous nation resides the capacity to hear the cries of the helpless.

These women are Ethiopian citizens, non-Jews, snatched from their birthplace as little girls and taken by human traffickers to Sudan. From here they were sold into the Sinai, where they endured endless months of horror, filled with rape and abuse, in torture camps. They were finally dropped on the border of Israel in 2012. The girls who survived to cross the border were in tragic condition – abused, starving and terrified. None would even allow themselves to contemplate where they were being taken and what nightmares lay ahead. They could not imagine that at the end of this journey they would find themselves in Israel, and it would be transformed from a strange and foreign destination into the very place where their wounds would begin to heal. In the years which followed, they underwent rehabilitation at a shelter for survivors of trafficking and slavery. Some eventually succeeded in establishing families, and all continued to struggle with the scars on body and soul, with the memories that never heal. The trauma was so intense that when the girls were first dispersed among various boarding schools, those who remained together would push their beds together, often embracing each other in sleep out of raw fear.

These women, who are now in their 20s, were recognized by the state as survivors of human trafficking and have undergone extended rehabilitation in Israel. Nonetheless, several months ago, they were unexpectedly informed that they faced imminent deportation back to Ethiopia. To return to Ethiopia is an impossibility in their eyes — many suffered abuse which drove them from their homes from the outset; others were orphaned very young. Even those who maintain some sort of connection with relatives will not be accepted by their families in Ethiopia should they return, because of the terrible stigma placed there upon women who have been sexually abused.

Since June there have been numerous appeals placed before Minister of the Interior Aryeh Deri, asking that he grant these women permanent residency status here in Israel, based on humanitarian grounds, and he has yet to decide on the case. It is important to note that every day which passes in such total uncertainty is a massive blow to their psycho-emotional health; the threat of deportation keeps their trauma alive.

There is a group of Knesset members, among them representatives from Likud and Yisrael Beteinu, which has formed in support of granting these women status. For me, this is not a story of left or right, it is simply about the heart. The time has come for the broader public to join in the call to Minister Deri, urging him to act with loving-kindness toward a small group of women who fell victim to evil and need a refuge in our country. As a religious Zionist woman, I add my voice. I do this not just for the sake of these women, but for also the sake of my Zionist dream – my yearning for a just and merciful society, one which can extend its hand to the weakest among us. It is true that our tiny country cannot help all those who suffer in the world, but in moments like this we are obliged find room in our land, and above all in our hearts.

This article was originally published in Hebrew on “Srugim” here.

About the Author
Karen Feuer made Aliyah from the United States in 2002 and lives with her husband and five children in Ma’aleh Adumim. She works in administration at the Pardes Institute of Jewish Studies and is a certified medical clown. She is an activist against Israeli security exports to murderous regimes and ran with "The Jewish Heart" party in the last elections.
Related Topics
Related Posts
Comments