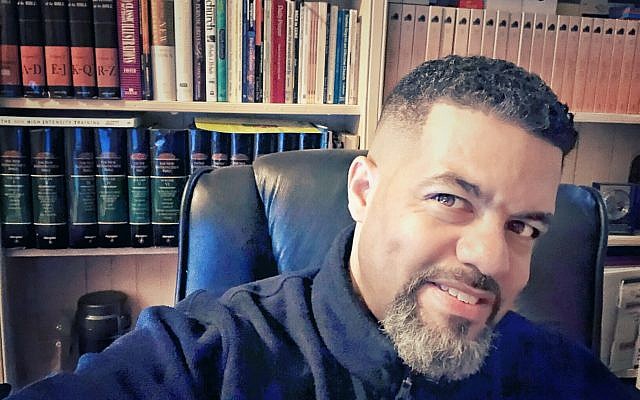 I would like to share with you a fascinating story about a man I came into contact with this year, a person whose life experiences have moved me greatly, and whose vision for a better future can provide all of us with a bit of hope.

This past semester, I taught a course on “Interfaith Dialogue and Peacebuilding” at Drew University in Madison, New Jersey. One of my students, a man who goes by the name of “Pastor Benny”, was not only an excellent student but had an amazing story to tell.

Who is “Pastor Benny”?

Rev. Dr. Hector B. Custodio (or Pastor Benny as he’s better known) was born in East New York, Brooklyn, and is of Dominican descent. Pastor Benny earned a BA degree and is a proud graduate of the New York Theological Seminary Master’s degree Program, class of 2007. After spending 20 years as a wrongfully convicted man, he finally earned his much desired freedom in 2011. He continued his education, earned his Credential Alcohol Substance Abuse (CASAC) license, became a New York State (NYS) board certified Chaplain, and received the Orlando E. Costas Scholarship from Andover Newton Theological School, where he earned his Doctorate in Ministry degree in May 2018. He is now  the Senior Pastor of Immanuel-First Spanish United Methodist Church in Brooklyn, New York,  and works with the mental health, substance abuse, and re-entry population. Pastor Benny enjoys being a part of the human repair business, has an unwavering a passion to win souls for Christ, and is on a mission to put the Department of Corrections out of business.

After 20 years in various prisons in New York State for a crime he did not commit, he found his freedom. During his years in prison, not only did he succeed in getting a college education but he became an ordained minister as well. Indeed, he told us in my class that he found God while he was in prison, especially when he was in solitary confinement. He has told me that two of the sacred texts that have motivated him spiritually for his life and his work are:

Be strong and courageous. Do not be afraid or terrified because of them, for the Lord your God goes with you; He will never leave you nor forsake you. (Deuteronomy 31:6) and

He Himself has said: ‘I will never leave you nor forsake you.'(Hebrews 13:5)

This is an incredible personal narrative of a man who has chosen a positive path in life, despite his wrongful conviction and long incarceration.  In his final paper for my class, he wrote:

As an individual who has transitioned out of the corrections system, I have spent my years since my release moving forward and have opened my own church in an effort to help others who are in similar pain.

While in prison, he came across the concept of becoming a “prophetic witness” in a book by Cornel West:

In the face of callous indifference to the suffering wrought by our [American] imperialism, we must draw on the prophetic. The Jewish invention of the prophetic commitment to justice—also central to both Christianity and Islam—is one of the great moral moments in human history. This was the commitment to justice of an oppressed people. It set in motion a prophetic tradition based on the belief that God had imparted this love of justice because God is first and foremost a lover of justice.

This idea resonated with Pastor Benny, so much so that he decided to be a prophetic witness in his own community, in Brooklyn, where he serves as the minister of a large United Methodist Church, mostly for Spanish speaking Americans. He has done so by setting up an amazing grass-roots organization called “Never Forsake Re-entry Ministries, Inc.,”  an organization which has a clear and concise purpose:

The mission of the organization is to provide returning citizens with preparation for job placement, including education and certification to reintegrate individuals who are ready for employment.

At the same time that he is focused on the local community in Brooklyn, he is also very interested and involved with advocating with others for prison reform in the USA. The penal system in America is in crisis, and is in desperate need of major revisions. It is particularly bad for people of African American descent, who languish in prisons in greatly disproportionate numbers to their population in the USA, especially on “Death Row.”  Specifically, his organization and a coalition of faith-based institutions are launching a major campaign to advocate for the reform of the existing practice of post-prison punishment.

I was fortunate to come to know Pastor Benny who is a religious leader who looks forward, not backward. Moreover he wants other people to look forward with him. He is a person who inspires others to act, out of love and compassion, based on his deep religious beliefs and his unique personal experience. In addition,  he sees the connection between the micro and the macro and works on both levels, with a vision that is religiously driven and a passion that is clearly felt by everyone who comes in contact with him, including myself.

I believe that we need more religiously motivated leaders like Pastor Benny who engage in social justice for the betterment of their communities, and for the betterment of all citizens in their country. People can learn from his experience and his wisdom about how to plan and develop a faith-based organization that is committed to peace-building on the local and national levels, which points the way towards a better future for everyone.