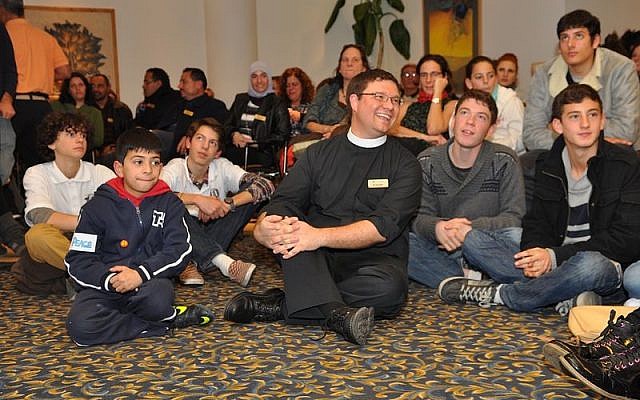 Recently, I was invited to attend the 6th annual winter event of Kids4Peace in Jerusalem entitled The Light of Hope, at the Beit Shmuel cultural center in Jerusalem. I decided to go out of curiosity, but I did not know what to expect.

It was very cold outside in the midst of winter in Jerusalem, but when I arrived at this event I was positively overwhelmed by the energetic enthusiasm of nearly 300 Palestinian and Jewish youth, members of their families, and the dedicated professional staff of Kids4Peace. This amazing interfaith youth movement in Jerusalem (and in the USA) has not only succeeded in persisting in its pursuit of peaceful coexistence among Israelis and Palestinians for the past 16 years, but it has actually been growing from year to year—tripling in size during the past three years– despite the decline in the political peace process during the past two decades.

One of the main reasons for the growth of this movement in Jerusalem has been the support of the CMM (Conflict Mitigation and Management) program of USAID. Unfortunately, due to the deleterious anti-peace policies of the Trump administration, this funding source is ending as of this year, which is making life much harder for Kids4Peace and other peace-oriented programs in Jerusalem. This has made peacebuilding efforts between Palestinians and Israelis more difficult, but not impossible, since CMM has been one of the major funders of such programs during the last 10 years. Nevertheless, Kids4Peace is succeeding in finding alternative sources of funding to enable it to keep going.

The mid-winter Light of Hope event was co-chaired by two teenagers, both of whom have been involved in the Kids4Peace programs for several years. They both spoke beautifully about how they have learned to dialogue, to listen, to share their personal and collective narratives, to form relationships of friendship with the other, and to develop skills, knowledge and confidence in their peacebuiding work. They described the work of Kids4Peace not just as a set of enjoyable activities in a program from year to year, but as a movement which young people can participate in throughout their youth, from 7th to 12th grades:

Our movement seeks to empower youth to have more peaceful communities.

One of the main people responsible for the continued growth and persistence of Kids4Peace is Rev. Josh Thomas, the Executive Director, who is based in the USA, but was in Jerusalem for this annual event. He greeted the huge crowd with a big smile and a round of thanks to his funders and to his dedicated staff, and then he presented his message succinctly and sensitively. Since the anniversary of the assassination of Rev. Dr. Martin Luther King was coming up in a few days, he began his remarks with a quote from Dr. King:

And then he went on to use the themes enunciated by Dr. King to give his poignant message to the hundreds of youth, parents and staff in the audience:

I see light in the nervous excitement of Israeli and Palestinian kids who meet for the very first time through Kids4Peace. I see love in the moms and dads who invite each other – Jews and Arabs – to share a meal in each other’s homes. I see light in the Israeli and Palestinian Kids4Peace staff who work every day, side by side, as equals, to support this movement. I see the power of love every time I visit a Kids4Peace meeting, and witness the energy and excitement when you see each other. Because you know you’re part of a community of youth – Israelis and Palestinians – who are committed to creating a better world. 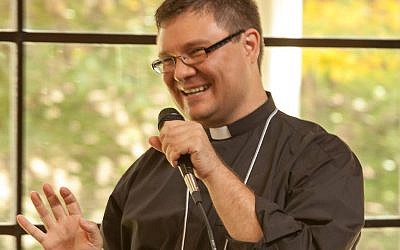 In addition, two ninth graders — one Jewish Israeli and one Palestinian Arab –who are currently involved in the movement, each gave their own powerful personal testimonies about why their participation is so important to them and why it motivates them to continue to be hopeful. One of them said:

Every day we are here to say that peace is possible.

This reminded me of another event for peace with which I was involved several years ago. For 11 years, my former organization — the Interreligious Coordinating Council for Israel (which also served as the Israel chapter of Religions for Peace, cooperated with Auburn Seminary in New York on an amazing international interfaith dialogue program for peace called Face to Face/Faith to Faith. This unique program brought together teenagers from 4 conflict zones — Northern Ireland, South Africa, Israel-Palestine (specifically Jerusalem) and inner cities of the USA — for yearlong dialogue and action programs in each region, culminating in an international two-week camp experience at a Presbyterian camp in upstate NY, where the food was kosher, vegetarian and halal, so all could eat together. It was a transformational experience for most of these teenagers, similar to what goes on now via Kids4Peace.

One year, I attended a fundraising dinner for the program in New York City, at which seven young participants were interviewed on stage by a local journalist, who asked them to describe their insights and experiences with Face to Face. They all sat on a big stage, under a huge banner, which proclaimed Peace is Possible. When it was over, I asked one of the Israeli participants to tell me how he understood this slogan, and she said:

I don’t know much about the political peace efforts, which seem to be failing, but I can tell you this: We just did it. We lived in peaceful relations for two weeks in camp — black and white teenagers, Protestant and Catholic, Jewish Israelis, and Palestinian Arabs — and we all got along well. We proved through this experience that peaceful living with kids from other religions and nationalities is possible.

In my view, nothing can be more important than working with Israeli Jewish and Palestinian youth in Jerusalem and elsewhere, if we want to envision a better future. Too many people are mired in the ongoing tragedies of the past and the present. We need to envision a better future for our children and grandchildren, who with foresight and courage can create a new reality over time, without cynicism or defeatism. This is the moral imperative of the work of groups like Kids4Peace who are still actively involved in building peace from the ground up in Jerusalem and the region.