Is confrontation with President Obama really the only way that Prime Minister Netanyahu can relate to the framework agreement with Iran that was announced last Thursday?

On the one hand we know that Netanyahu thinks that the framework agreement with Iran is “a bad deal” that “threatens the survival of the State of Israel “, while  Obama says that “it’s a good deal, a deal that meets our core objectives, including strict limitations on Iran’s program and cutting off every pathway that Iran could take to develop a nuclear weapon,” and that most of the  arms controls experts believe that it’s the best possible realistic deal, which is good for both the U.S. and Israel.

Learning from Encounters with Iranians

I have learned some things from a series of recent encounters with Iranians which suggest that there are alternatives to confrontation and appearances in the Congress, on CNN and Meet the Press

During the past five years, a number of Israelis have been engaging Iranians in 3rd party countries about the nuclear issue.  These encounters were prompted by a resolution taken at the Nuclear Non-Proliferation Treaty (NPT) Review Conference in 2010 in New York which called for the convening of “an international conference on a Nuclear and Weapons of Mass Destruction Free Zone in the Middle East”, which according to the original resolution was to be convened in 2012.  That resolution led to a series of civil society encounters in various European locations, in New York, in Cyprus, Turkey and even in the middle of the Mediteranean Sea on the Japanese Peace Boat.   The Israelis who participated were journalists and civil society activists like myself, and academics, researchers and security experts, particularly from the Institute for National Strategic Studies at Tel Aviv University.   The Iranians were academics from Teheran, former and current diplomats and civil society activists. Other participants at these encounters came from Egypt, Jordan, Saudi Arabia, the Gulf States, Lebanon, Palestine, Europe, the U.S. India and even Australia.

Meeting Iranians & Saudis in Berlin one week before the elections

The most recent encounter took place in Berlin just a week before the Israeli elections, hosted by the Arms Control Department of the German Foreign Ministry, organized by the Academic Peace Orchestra Middle East initiative of the Peace Research Institute Frankfurt. The Iranian academic who was scheduled to participate was unable to come because he was stuck after another conference in Nepal due to a plane crash on the runway of the international airport, so his place was taken by two Iranians living in Europe who travel back and forth to Iran.

In an exchange with one of the Iranians, I said that one of the primary reasons that all Israelis share anxieties about Iranian intentions is the fact that President Rouhani’s government has not done what is necessary to assure the Israeli people that the statements made by former President Ahmadinejad about “eliminating the Zionist regime” and his Holocaust denial, do not represent Iranian policy.

His response included the following points: 1) The Iranian leaders no longer use the term “Zionist regime” when describing the country, but simply say Israel; 2) President Rouhani signaled a desire for a different relationship with Israelis and Jews in general when he issued a greeting for Rosh Hashana, the Jewish New Year; 3) He has called the Nazi crimes against the Jews “reprehensible”; 4) He has had a very positive attitude towards the Jewish community in Iran.

What President Rouhani should say to Israelis

My response was that with all due respect, this was not enough.  What was needed was direct communication from President Rouhani and the other Iranian leaders to the Israeli public, saying that we respect and recognize the right of the State of Israel to exist.  What they oppose is not Israel, but the Israeli occupation beyond the 1967 borders, and Israeli military threats against Iran.  Some of the Iranians understand this, but say that such statements are not yet possible at this stage.

This is where my challenge comes to Netanyahu’s Iranian policy. All he seems to be able to do is to warn about potential threats eminating from Iran. In contrast to that approach, I agree with former Mossad head Ephraim Halevi, who said after Rouhani’s election that the Prime Minister’s description of the Iranian President as “a wolf in sheep’s clothing” was a strategic mistake, and that his total rejection of any possibility of a change in the Iranian approach was wrong.

What Netanyahu should say to Iranians

What Netanyahu should do is to say that Iran and Israel have common interests as two major non-Arab states in the region, they were once allies in the early days of the State of Israel, and they could be allies once again.  Israel is not an enemy of the Iranian people, and we are ready to engage with the Iranian leadership, since we recognize Iran’s right to exist.  The Prime Minister should issue a positive challenge to the Iranian leadership, not just threats.

Netanyahu would also be justified in putting the issue of Iranian financial and military support for Hezbollah and Hamas as a threat to Israeli security on the table as well.  However, he would be in a much better position to do so if he would announce a freeze on settlement activity and a serious readiness to negotiate a resolution of the Israeli-Palestinian conflict based upon a two-state solution on the basis of the1967 borders, with mutually agreed upon land swaps.

The Prime Minister is fully aware of these encounters between Israelis and Iranians.  One of the participants in the Berlin conference on March 11-12 was Ambassador Jeremy Issacharoff, the Deputy Director General of the Israeli Foreign Ministry, in charge of arms control affairs. And none of the Iranians who participated in the talks over the past five years could have attended without the knowledge and support of elements within the Iranian regime. 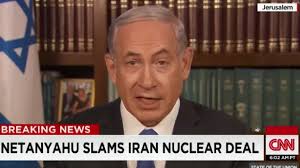 I asked the senior Saudi participant at the Berlin conference, a former ambassador and head of Saudi intelligence, what he thinks about Netanyahu’s approach to the negotiations with Iran.   His response was that the Saudis also have concerns about the Iranian nuclear program, “which begin with the geography, they are our immediate neighbors.” But he added that he clearly disagrees with Netanyahu’s “theatrical tactics”. He said that Saudi Arabia believes in quiet diplomacy, and they express their concerns and recommendations directly to President Obama, without public posturing.

This nuclear issue in our region will not end with the potential final agreement that will be reached by the end of June.

The 2015 NPT Review Conference in May: What is Israel’s Policy?

The Nuclear Non-Profliferation Treaty (NPT) Review Conference that I referred to at the beginning of the article meets every 5 years, and the next conference will be convened at the end of this month, on April 27 in New York, and it will continue until May 22.  The issue of convening an international conference on a Nuclear and Weapons of Mass Destruction Free Zone in the Middle East will once again be on the table.

Iran is a member of the NPT, which already commits it to open its nuclear facilities to a serious international inspection regime, a regime which will be made even more stringent following a final agreement with Iran at the end of June, making it in the words of former Israeli Minister of Intelligence and Atomic Energy Dan Meridor one of the “most transparent” nuclear programs in the world.  Being a signatory to the NPT is also the basis for Iran and all other signatories to have a civilian nuclear program, what President Eisenhower called in 1953 “Atoms for Peace.”

As a participant in 5 governmental level consultations held in Switzerland since 2013 about the convening of an international conference in Helsinki on a Nuclear and WMD Free Zone in the Middle East, Ambassador and Foreign Ministry Deputy Director General Issacharoff is very familiar with these dynamics, and the fact that the issue will the on the table in New York in April/May.  Israel is not a signatory to the NPT, so it will not be there as a direct participant.  However, the Israeli government, with Netanyahu at its head, would be well advised to formulate a constructive policy towards the NPT Review Conference.   Threats and public posturing are not enough.

A more constructive policy towards both the Iranian leadership and people, and towards President Obama, would clearly serve Israel’s most fundamental security interests as well.