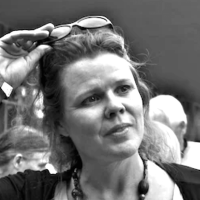 The Blogs
Mary Grossman
Apply for a Blog
Please note that the posts on The Blogs are contributed by third parties. The opinions, facts and any media content in them are presented solely by the authors, and neither The Times of Israel nor its partners assume any responsibility for them. Please contact us in case of abuse. In case of abuse,
Report this post.
Embed from Getty Images

My new friend Adam immigrated from the U.K. and lives across the street from where I am staying in the densely populated Kerem HaTeimanim neighborhood. I met him for the first time a week before the rockets at a dinner. I’m not even sure I know his last name. But we now have a special connection, bonded beneath the Kippat Barzel (the Iron Dome).

Our phones, which had quivered 24/7 with alerts from our Red Alert rocket app, finally lay still. Over 4,350 rockets were fired into Israel in the last 11 days. We sipped our drinks and ate kubaneh, quiet and sad. We were emotionally drained from the hundreds of rockets exploding over Tel Aviv and from the shocking disregard, if not justification, from the rest of the world. We were anxious about the terrible dilemma thrust upon us — defending our right to safety and worrying too over the fate of Palestinians living in Gaza.

The streets were empty, and there were no cars anywhere. My neighbor was blasting dreadful EDM around 9 p.m. when I heard the sirens go off.

It’s viscerally terrifying. I saw the first lights of the Iron Dome arching over the sky, quietly and gracefully. Then came more rockets. But this time, they turned toward me.

Suddenly, I went from being an observer to becoming a target in an act of war. The Iron Dome interceptions were getting closer, and I backed away from the patio as explosions rang overhead. Reports said 200 rockets were fired at Tel Aviv during this first salvo, and officials warned us to brace for more.

At 2:52 a.m., a huge blast shook my apartment. No sirens. Silence. Then there was another blast, and all hell broke loose. This second round was worse, as my mental state became more fragile. The sound of the Iron Dome intercepting rockets was jarring as the blasts directly overhead lit up my patio and shook the apartment. After a half hour, the Iron Dome did its job, and there was silence. (Audio clip: Listen to the Iron Dome intercepting rockets right above my apartment at 3 a.m. on May 12, 2021.)

In the post-ceasefire dark Mediterranean night, Adam and I talked about our friends, his in the U.K. and mine in the U.S. Many suddenly held deep anti-Israel opinions from the luxury of their Instagram accounts, 6,000 miles away.

People referred to the Iron Dome as if it were a bad thing, without a second thought about what would actually happen if it didn’t work or didn’t exist.

“My most progressive and like-minded friends not once texted and asked how I was doing, not once,” Adam said. 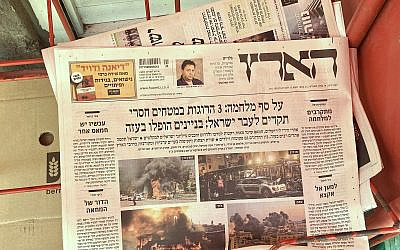 We were targets in this war. Many of us wondered if we were going to die. We wondered if the Iron Dome would actually work.

The rocket attacks on Tel Aviv continued for a few more days and eventually moved elsewhere. I learned to shrug them off even though some were hitting their targets nearby — a man in the next neighborhood was struck by a rocket and killed. It’s true that Israelis are tough, some battle-tested old Israelis didn’t blink. But a 13-year-old girl in my apartment building was terrified and sought shelter with me whenever the sirens wailed. A car door slamming triggered a rush of fear and adrenaline because it sounded like explosions or sirens.

Here’s one thing I learned from all this havoc — I’m finally Jewish. It’s been nearly 20 years since I converted and took that first plunge into the mayim chaim. But any Jew by Choice will tell you — and they’re lying if they deny it — that they always question their Jewish identity. Converts are often reminded that they were not born to this tribe. Whether it be at a Shabbat dinner as guests reminisce about Jewish summer camp, or whether an old matriarch of the shul says she loves your shiksa hair.

But under the explosions of the Iron Dome I felt for the first time that I was no different than anyone who was born a Jew. I am part of this group and we are being targeted not only in the skies over Tel Aviv, but around the world.

Tonight, we ended our Shabbat feeling bewildered and depressed. I joked that I was more afraid to go back to the U.S. next week than stay here in Israel. Adam agreed, as he had an impending trip back to the U.K. During our evening, his sister back in the U.K. texted a video from his childhood neighborhood of a rabbi getting attacked and beaten by pro-Palestinan demonstrators.

I could conclude by mirroring my story with the horrors of Gaza. I could sum this up with a plea for coexistence and peace between Palestinians and Israelis. I could bang my head against the wall trying to explain the history of Jewish people to woke activists. But I trust that you know all of that and understand that I do, too. I can’t write about the path to peace between two indigenous movements better than some of our best writers out there, so I won’t.

All I can do, for now, is tell you what happened to us and what it felt like.

This essay was originally published on Chosen by Choice by Nellie Bowles on 6.3.2021. Check it Nellie’s Substack!

About the Author
Mary Grossman, a member of the American Jewish Press Association, founded the first and only Wyoming Alt Weekly in 2002, called Planet Jackson Hole. Now, she is the Executive Director of the Jackson Hole Jewish Community. She travels toTel Aviv frequently to visit and explore.
Related Topics
Related Posts
Comments