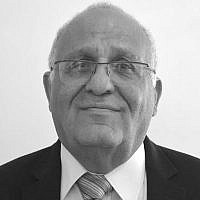 The Blogs
Pinchas Avivi
Apply for a Blog
Advertisement
Please note that the posts on The Blogs are contributed by third parties. The opinions, facts and any media content in them are presented solely by the authors, and neither The Times of Israel nor its partners assume any responsibility for them. Please contact us in case of abuse. In case of abuse,
Report this post.

Dramatic realignments in the Middle East and the global stage are creating a new and vital opportunity to roll back Iran’s take-over of Syria. This strengthens Israel’s stance.

Tehran and Moscow were allies in a common quest to save the Assad regime, and destroy extremist Sunni Islamist forces in Syria. Now, they are increasingly at odds.

Russia’s original intent in entering the Syrian arena was based on two interests. The first was creating access to a warm water port on Syria’s Mediterranean Coast (much like it did in Crimea). The second was to stabilize Assad’s rule in the face of the Syrian rebel organizations, and prevent Syria from falling under the control of radical Sunni organizations.

Russia’s security is threatened by Sunni Islamist-jihadist groups, particularly in the northern Caucuses, and it did not wish to see Syria turn into a base for such forces.

Upon entering Syria, Russia sought to use Iran as a proxy in the war against radical Sunni organizations. The US, under both the Obama and Trump Administration, largely left Syria to Russia’s devices, and the Russian-Iranian alliance succeeded in its goal of enabling victory for the Assad regime.

But Iran had its own agenda, viewing its partnership with Russia as an opportunity to activate a program to take over the Middle East.
Iran is pursuing this program via two channels. In the first channel, it is spreading its influence across the Persian Gulf, into Yemen. The second channel, which is much more dangerous for Israel, resulted in the creation of a stable land bridge connecting Iran, Iraq, Syria, and Lebanon.

Taking advantage of Russia’s presence, Iran took highly accurate, calculated steps to build bases in war torn Syria, including in Damascus. Its long reach now extends directly from Tehran to Beirut, with the assistance of its proxy, Hezbollah.

It took Russia some time to understand Iran’s agenda, but Russia’s decision makers are now waking up to the fact that Iran is threatening Russia’s own interests in the region. Russia has begun colliding with Iran, and Moscow is trying to prevent the Iranians from setting up more bases (though with little success thus far).

AN INTOLERABLE THREAT TO ISRAEL

Israel does not have the privilege of allowing Iran to take over Syria, or to sit on its hands as the Iranian land bridge takes form. Should Iran reach the Mediterranean, its forces would be stationed just a few hundred kilometers from Israeli population centers, posing an intolerable new threat. In addition, an Iranian territorial continuum that spreads deep into Syria and reaches the Israeli border forms a major risk to regional stability, which contradicts Russia’s original interest in entering the Syrian arena.

The new split between Moscow and Tehran could help reverse this threat.

The alliance is also souring because of intense Russian-Iranian competition over the energy market. The whole of Russia’s economy is today based on energy, yet Iran is encroaching into this, through its vast sales of oil and gas to the far east, in a trade worth tens of billions of dollars.

These developments are all coinciding with a new Russian weakness on the international stage.

Moscow is facing an increasingly assertive NATO bloc. The accusations leveled toward Russia regarding the attempted assassination of an ex Russian double agent with a chemical nerve agent in Britain has seen the NATO bloc spring to life, and push back strongly against Russia. This has surprised the Russian assessment of the West as weak and inactive – the same assessment that led Russia to take over Crimea, and move into Syria.

Throughout this time, Israel has remained an island of stability, and regional power that has maintained a good dialogue with Moscow.

Russia, for the first time in a weakened position, is more inclined now to take Israel’s interests into consideration. The Russian presence in Syria was never an Israeli interest, but the dialogue channel between Jerusalem and Moscow is at an unprecedented level. The number of visits paid to Moscow by Prime Minister Netanyahu is testament to this.

Israel can press its open dialogue with Russia to help roll back the Iranian presence in Syria.

In addition, due to the newly resurgent Western bloc, and because of Iran’s conduct in Syria, Moscow will be more open to coordinating with Washington against the Iranian axis. Russia is already giving the US some freedom to act against the Shi’ite coalition in Syria.

All of these developments mean that Israel’s regional position is getting stronger.

Now that Iran’s steps are harming Russia’s interests, as well as threatening Western forces in the region, Russia and the US-led coalition should take Iran’s expansion more seriously, and clip Tehran’s wings, before Israel might have to do so itself.

About the Author
Pinchas Avivi concluded his diplomatic career as Senior Deputy Director General in charge of global, strategic and multilateral affairs for the Israeli Ministry of Foreign Affairs in 2014. He has held key positions, including those of Deputy Director General of the Ministry of Foreign Affairs for the Central Europe, Eurasia and Russia division. He was also the Ambassador of Israel to Turkey. He is a diplomatic advisor to Our Soldiers Speak (www.oursoldiersspeak.org)
Related Topics
Related Posts
Pinchas Avivi
Comments