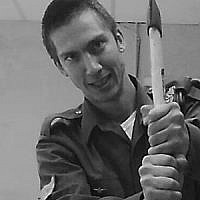 The Blogs
Neil A. Radow
Apply for a Blog
Advertisement
Please note that the posts on The Blogs are contributed by third parties. The opinions, facts and any media content in them are presented solely by the authors, and neither The Times of Israel nor its partners assume any responsibility for them. Please contact us in case of abuse. In case of abuse,
Report this post.

Sitting outside, sipping my cappucino, I barely notice the constant sounds of explosions from the south. This has become the new normal. It’s impossible to know who is firing. Merely a few kilometers away from the cafe where I sit, my brothers in the IDF are battling for their lives against Hamas terrorists who threaten our very existence. Every now and then, my thoughts are punctuated by an explosion that is louder than usual and shakes the ground. A siren sounds and I have 15 seconds to find shelter. As soon as we hear the boom and get the all clear signal, our team is ready to go.

I am volunteering in Ashqelon, a city in southern Israel, with Israel Aid Mission. We act as first responders to rocket attacks directed against Israeli civillians. Thank goodness I have not had to treat any serious injuries so far, but that could all change in a heartbeat. As of now, most of those that we have treated have suffered from shock – which is dangerous, but, if prompty treated, poses little long term danger. When the whole incident is over, we return to the war room and it’s back to the routine of “hurry up and wait.” It really is true that war is hours of pure boredom- punctuated by brief periods of sheer terror. It is so surreal.

Due to beaurocratic issues, I didn’t get deployed in the reserves along with most of my friends. It breaks my heart. I would do anything to be fighting alongside them. I guess we all do whatever we can.

About the Author
Neil was born in New York City and grew up in Atlanta, Georgia. After a brief stint volunteering with Sar El (Volunteers for Israel) during the 2nd Lebanon War, he decided to make Aliyah and draft to the IDF.
Comments