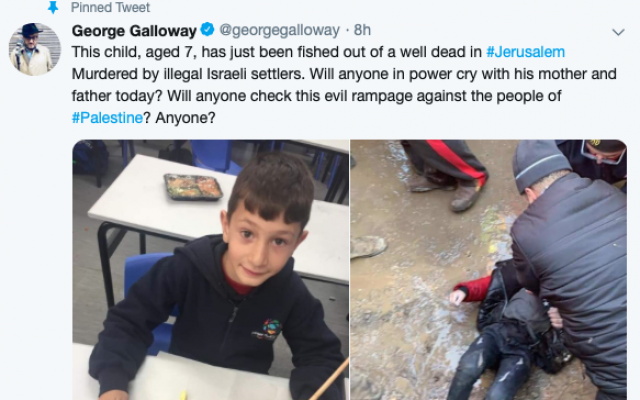 On 24 January, Israeli police found the lifeless body of Qusai Abu Ramila, a young Palestinian child in Jerusalem. He had apparently drowned after falling into a pit that was filled with water from the previous night’s heavy rain. What should have been seen as a tragic and terrible accident morphed into an ugly outpouring of hate against Jews, something tantamount to a blood libel.

A Twitter account under the name of RealSeifBitar launched the most incendiary of accusations. It claimed that Ramila had been ‘kidnapped by a Herd of violent #Israeli settlers, assaulted & thrown in a water well’ and that his body was found after Israeli forces ‘assaulted search teams.’ The unfounded claim of murder did not stop there.

The original tweet was then shared by Palestinian legislator Hanan Ashrawi who wrote: ‘The heart just shatters. The pain is unbearable. No words.’ She later apologized for retweeting something that was ‘not fully verified’ and admitting that news of the boy’s kidnapping was ‘not certain.’ Spurred by false and lurid accounts of the boy’s murder, an enraged group of Palestinians marched on the Jerusalem neighbourhood of Neveh Ya’akov, resulting in clashes that left 12 people injured.

Meanwhile, Democratic Congresswoman Rashida Tlaib chose to circulate the tweet to her many followers before going on to delete it, though without a shred of remorse or apology. So too did George Galloway, no stranger to making the most poisonous charges against the Jewish state. He claimed on his tweet that Ramila had been ‘murdered by illegal Israeli settlers’ and that it was part of an ‘evil rampage against the people of Palestine.’ He has subsequently retweeted an article from Ha’aretz which mentioned that the boy had in fact ‘drowned.’ Not a single one of these individuals presented the tiniest scrap of evidence to support their points.

The reality is that Ramila’s death is more likely to be a case of negligence. Local residents had demanded the building of a fence around the pit, claiming it was a deathtrap, but this request was reportedly ignored by the Jerusalem municipality. But to seasoned Israel haters, such humdrum explanations offer no sensational story, no galvanising narrative, no stick with which to attack the Jewish state. That’s why they prefer an accusation of murder, of settler murder even. It satisfies their followers’ lust for hatred, rejection and conspiracy theory.

But is also a blood libel, a modern day version of the ancient charge that Jews deliberately murder non-Jewish children for their own sinister purposes. Sadly, the Muslim world has been no stranger to such insidious conspiracy thinking and there are many examples in the recent history of the Israeli-Palestinian conflict.

In 2007, Raed Salah, a leader of the Islamic Movement in Israel, accused European Jews of using children’s blood to bake holy bread. He was later convicted of inciting violence and racism. In 2013, the Palestinian organisation MIFTAH published an article, for which it later apologised, asking whether President Obama knew of the ‘relationship…between ‘Passover’ and ‘Christian blood.’ It went on to state that ‘gossip about historical Jewish blood rituals in Europe is real and not fake as they claim.’ Cartoons in the Palestinian media have often shown Jews as villainous, bloodthirsty creatures who prey upon the innocent, invoking the kind of dehumanising imagery that resonated with audiences in Nazi Germany.

But whereas in the past such accusations had a more local audience, today’s hyper connected world of social media amplifies their reach and gives them additional potency.

Ramila’s untimely death has been exploited by anti-Zionists to further their own agenda of hate. Instead, he should be remembered as a young boy whose death brought together Israelis and Palestinians, Jews and Arabs, in a common purpose.

For in the hours before Ramila’s body was found, they worked in tandem to find him, setting aside their political differences in an attempt to save a life. This is the kind of co-existence that we should be celebrating and, if possible, nurturing for a future generation. It would certainly provide a fitting legacy for a young life that ended too soon.