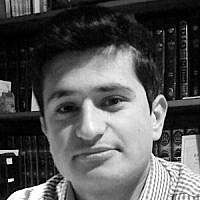 The Blogs
Avi Garson
Apply for a Blog
Advertisement
Please note that the posts on The Blogs are contributed by third parties. The opinions, facts and any media content in them are presented solely by the authors, and neither The Times of Israel nor its partners assume any responsibility for them. Please contact us in case of abuse. In case of abuse,
Report this post.

Immediately after Pesach, March of the Living UK embarked on a harrowing and life-changing journey of memories and remembrance, conscience and emotions, hope and utter despair, survival and catastrophe, light and darkness.

Unfortunately, very little evidence of Jewish presence in Warsaw survived the war. Ironically, the scene which vividly illustrates the richness, life and vibrancy of the dynamic Jewish community in Poland is the Okopowa Jewish cemetery. Established in 1806, there are 250,000 marked graves (this excludes the mass grave). It is the resting place of such a vast range of individuals from such different backgrounds and ideologies yet they are all buried together. From the Bund socialists to the Hasidic Rebbes; the secular musicians and actors deeply involved in the local culture to the learned Rabbis who spent their days secluded in the study halls.

Personalities such as Ludwig Zamenhof (1853-1917) the creator of Esperanto – an idea aimed to unite the world and usher in an era of understanding and peace- to the remarkable R’ Chaim Soloveitchik (1858-1918) the thinker behind the Brisker Talmudical study prevalent across Yeshiva academies around the world today.

The memorial of Janusz Korczak by the entrance of the cemetery is particularly touching and powerful as it symbolises the idea that the darkest moments in human history shed light on the best humanity has to offer. Dr Korzcak had dedicated his life to helping and saving the lives of the sick, young and vulnerable. During the deportations, he received an exemption card but steadfastly refused to abandon the staff and children in his care and heroically accompanied them into the gas chambers of Treblinka. In the statue he is depicted bearing a child in his arms, holding hands with another, leading and comforting the others. This incredible act of humanity, love, self-sacrifice overshadows the evil and cruelty. 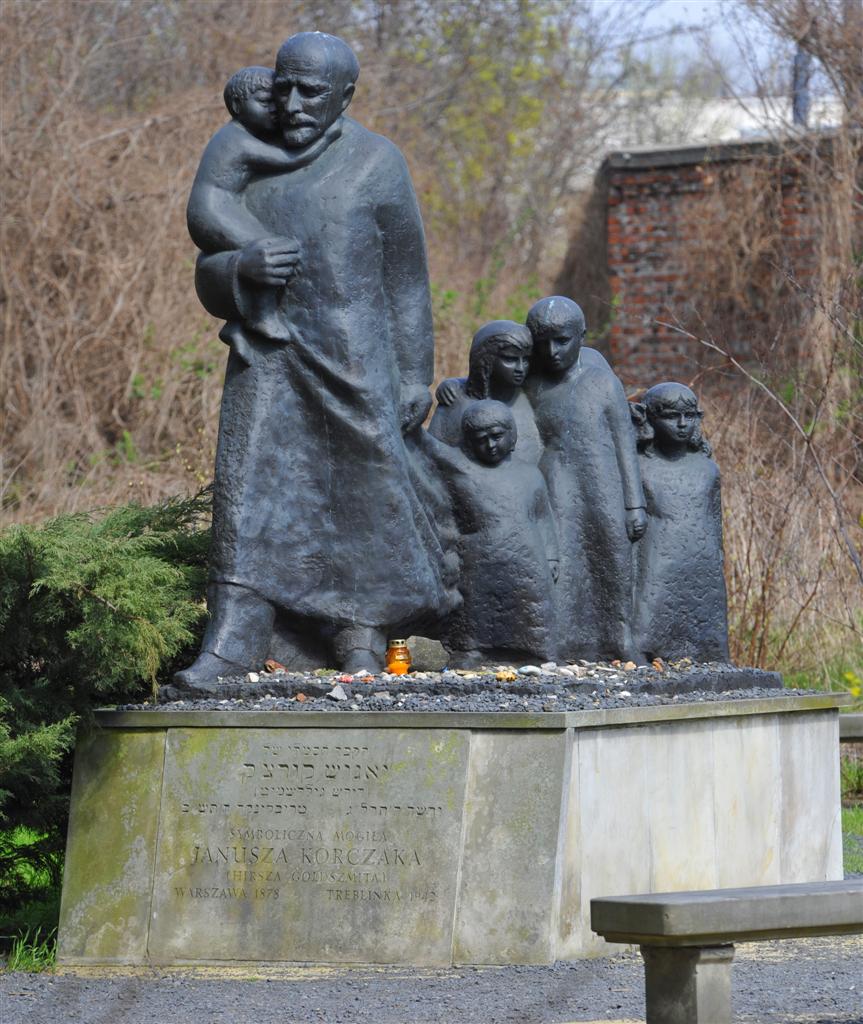 The Janusz Korczak memorial in the Jewish cemetery of Warsaw

Before we delve into the moral abyss of the concentration camps which we will undoubtedly always struggle to truly comprehend, it is critical we never forget the life that preceded the death, the bright light that preceded the pitch-black darkness…

Warsaw Ghetto, Majdanek: Heroism in the midst of such evil

The Warsaw Ghetto held nearly half a million Jews in a 3.4km² area. Gradually, the population and overcrowding began to decrease but only because of the Nazi deportations to Treblinka death camp.

In 1944, with despair, disease, hunger and ultimately death staring them directly in the face, different factions present in the Ghetto conjured up the inner strength to coordinate an uprising. Against the German juggernaut, the Jews knew they stood no chance. They fought out of principle and honour. Cornered in the Miła 18 bunker the last remaining fighters committed suicide and one cannot help but associate this with the last stand at Masada.

They may have lost the military battle but there was a psychological and moral victory. That warrior mentality of resilience and bravery may have been born in the Ghetto but it did not die there, I believe it helped create the Jewish state and lives on today in the IDF.

The next stop was Lublin. First, we visited the distinguished Chachmei Yeshiva in Lublin, the “Harvard of the Yeshiva World”. It opened its doors in 1930 but tragically was only in operation until 1939. Its founder was Rabbi Meir Shapiro famed for having instituted the global Daf Yomi programme. The legacy lives on. 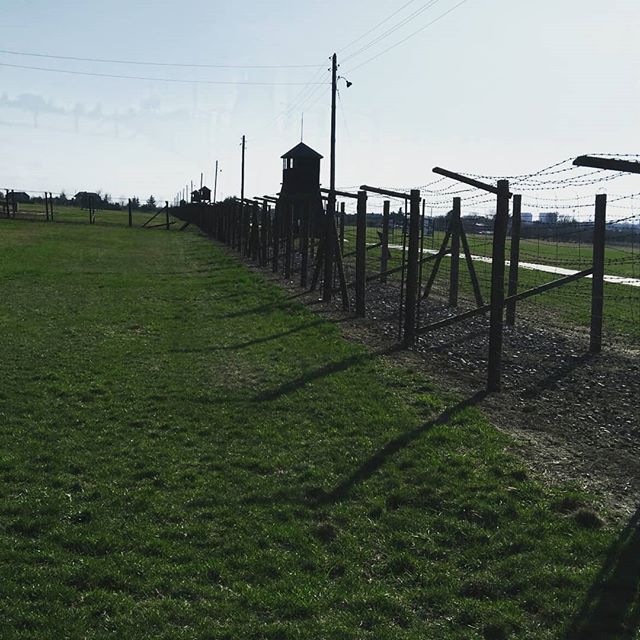 A watchtower behind the barbed wire in Majdanek

Majdanek lies on the outskirts of Lublin. The most well-preserved death camp is intensely evocative and it is a heart-rending experience. The watchtowers, barbed wire, the gas chambers, barracks, are still all there. Possibly the most disturbing sight of all is the thousands of shoes stacked up together – each belonged to a human being, each with their own individual story. It helps bring these unfathomable numbers into reality. The visit to the camp culminates with the mausoleum containing the ashes and remains of the cremated victims. The Kel Maleh Rachamim and Kaddish prayers take a whole new meaning in places like this. 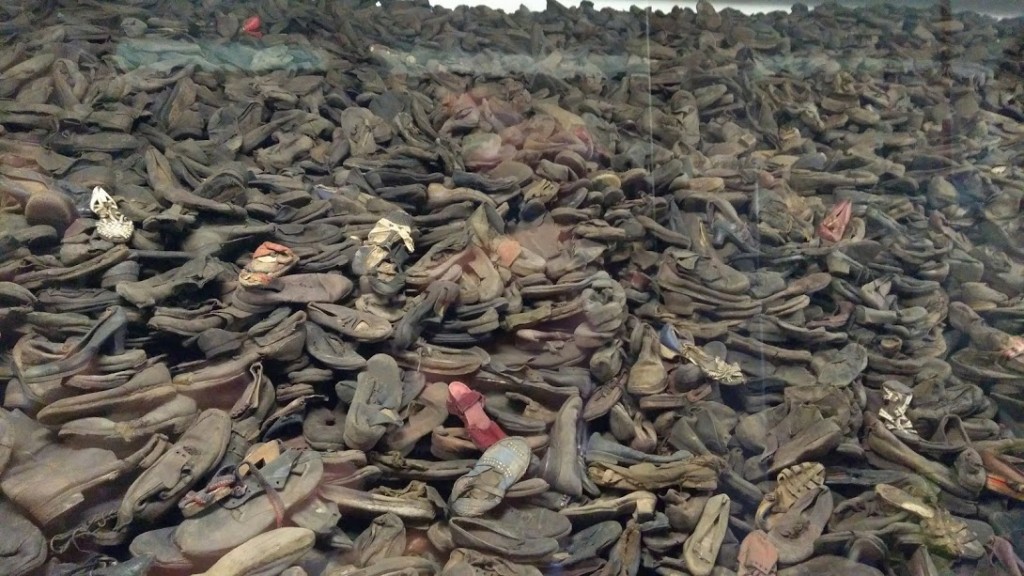 An estimated 78,000 Jews and Poles were mercilessly murdered at Majdanek.

Without a doubt, first-hand accounts are far more powerful and poignant than any history book or scientific study. It was a privilege to be accompanied during the day by Mala Tribich MBE who in the evening shared her own personal story of survival and moving testimony. 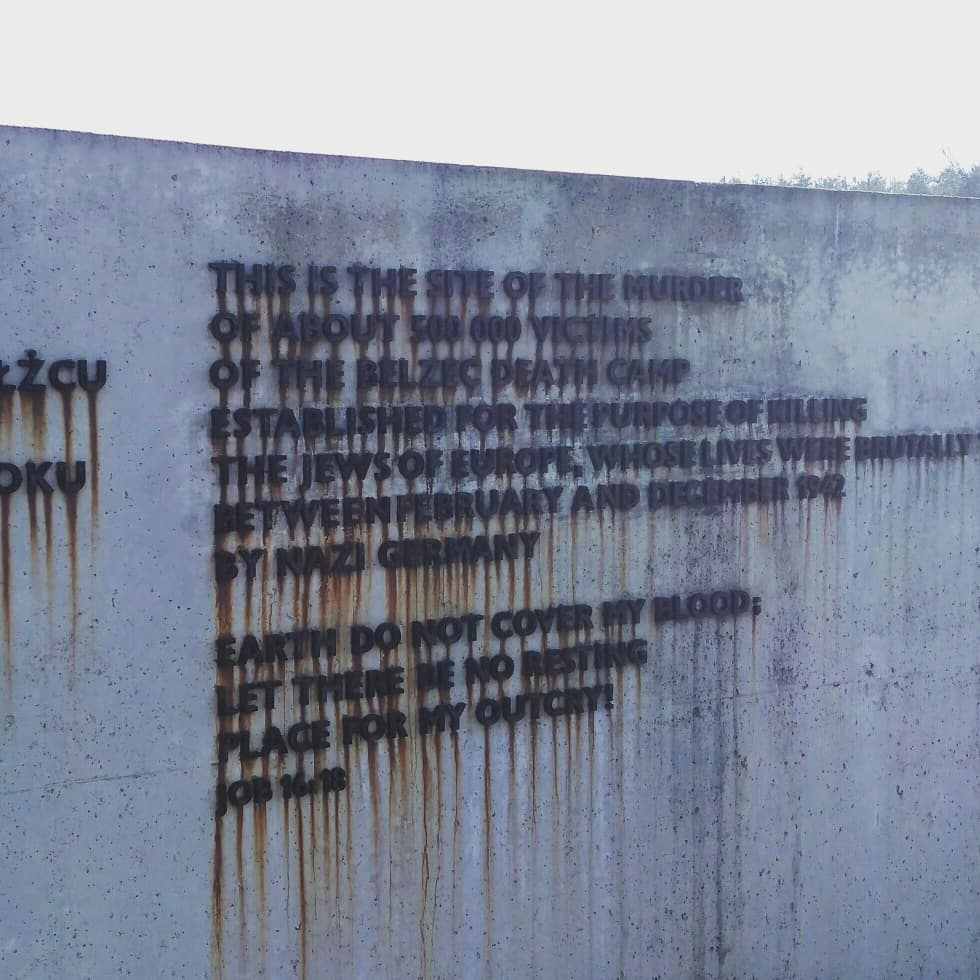 Memorial at the entrance of Bełżec death camp

Bełżec camp had one purpose and one purpose alone: Eradicate Polish Jewry – ‘Operation Rhinehardt’ – a critical component of the ‘Final Solution’. It fulfilled its mission scarily efficiently. The camp only operated from March to December 1942 and in that short time, it managed to liquidate 500,000 – half a million innocent men, women and children. They arrived in human form and left in ashes. Only 7 people are recorded to have survived this slaughterhouse. The monument standing there today is striking. The idea is that it depicts the hell on earth that Bełżec indeed was and will always be. 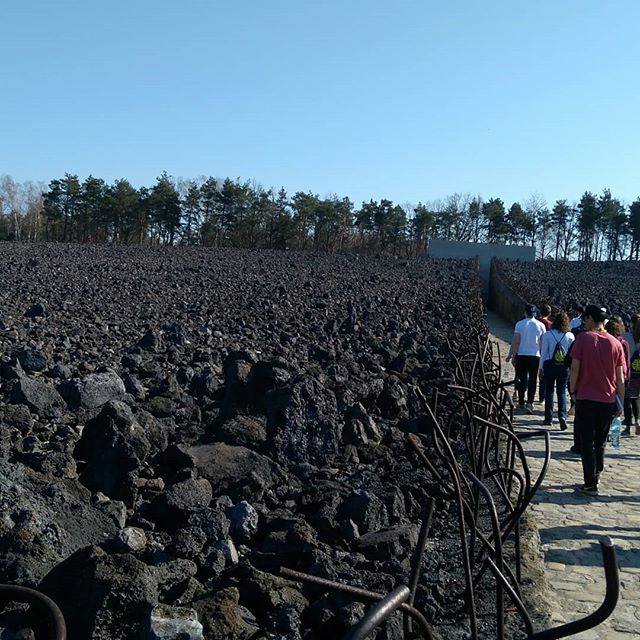 Eastern Europe is scattered with mass graves. The woods in Zbylitowska Góra is one site where incomprehensible cruelty was carried out by the infamous “Ordinary Men” of Reserve Police Battalion 101. In July 1942, 2,000 Christian Poles and 6,000 Jews were murdered in cold blood. Included in this were 800 children from the orphanage who were ruthlessly killed in the pits by hand grenades. 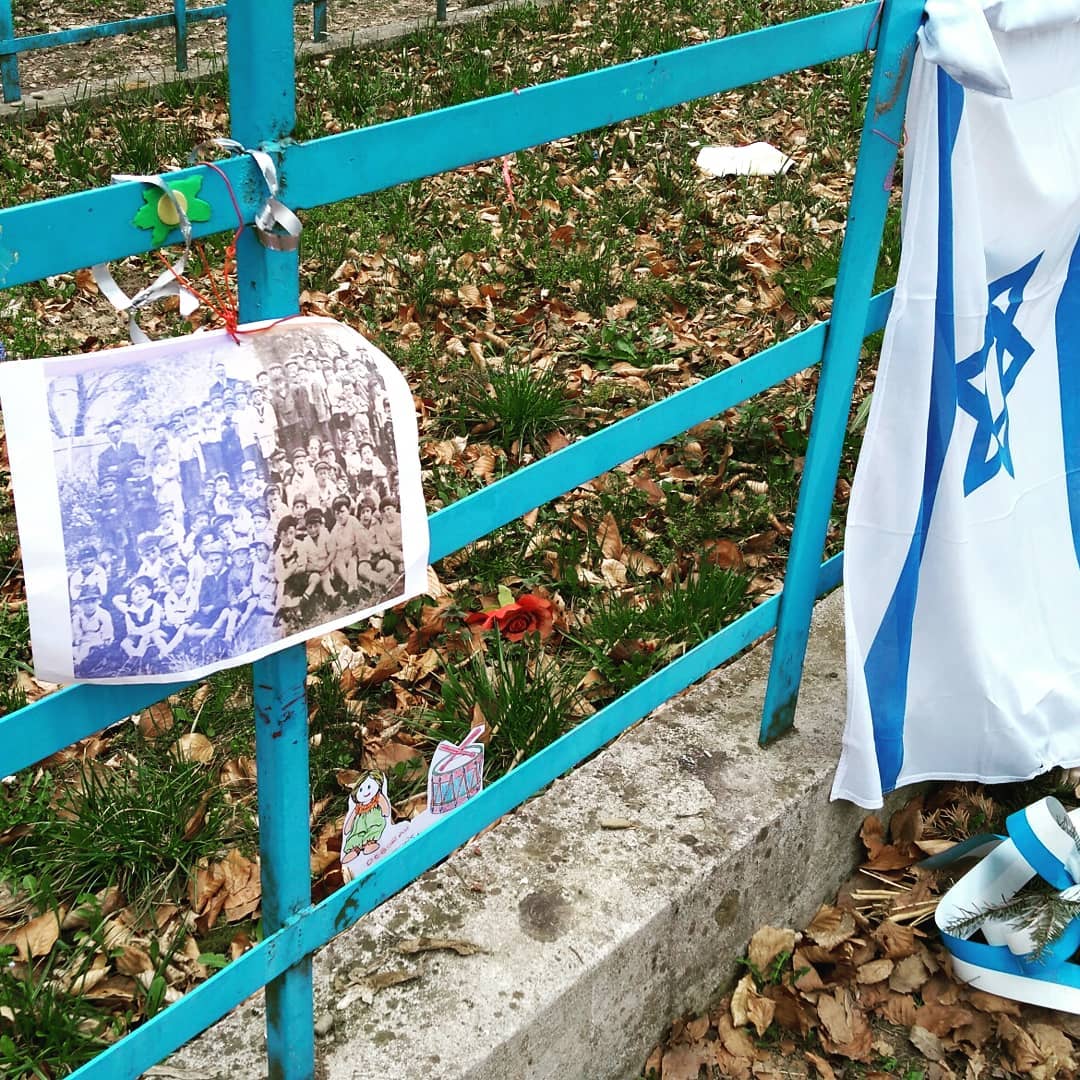 It is fundamental to remind ourselves that children were not caught up in this, they were targeted mercilessly. That was the sadistic nature of the Nazis.

“We played, we laughed we were loved.

We were ripped from the arms of our parents and thrown into the fire.

We were nothing more than children.

We had a future. We were going to be lawyers, rabbis, wives, teachers, mothers.

We had dreams, then we had no hope.

We were taken away in the dead of night like cattle in cars, no air to breathe smothering, crying, starving, dying. Separated from the world to be no more.

From the ashes, hear our plea. This atrocity to mankind can not happen again.

Remember us, for we were the children whose dreams and lives were stolen away.” (Barbara Sonek)

Auschwitz-Birkenau: The Factory of Death. 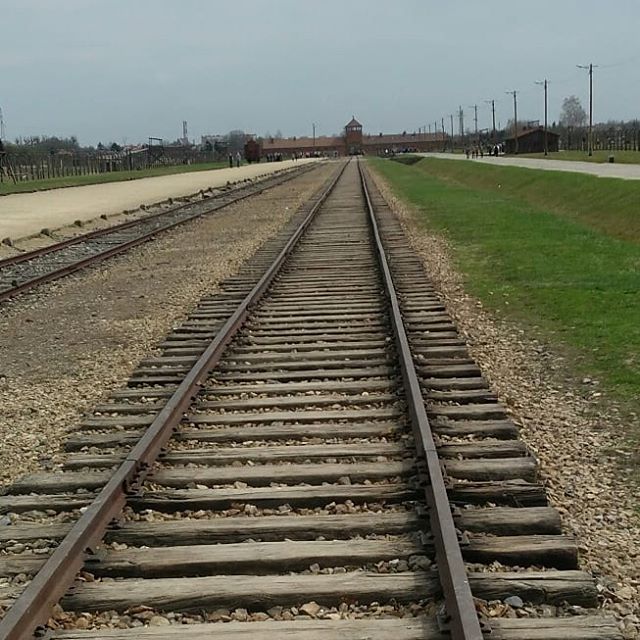 The tracks leading into Birkenau

1.1 million is a figure beyond our grasp and always will be. If one goes into Auschwitz with a handful of questions one leaves with 1.1 million. The sheer numbers, the depravity, the sadism, the perversion are incomprehensible. The obsessive nature with which they performed their duties is inexplicable. The moral dilemmas faced by the Sonderkommandos we cannot really grapple with.

How did it get to this? How could cultured, educated people carry out such an atrocity and with such barbarity? How could the human race fall to such levels? How can people solely 70 years later deny these historical truths and facts? 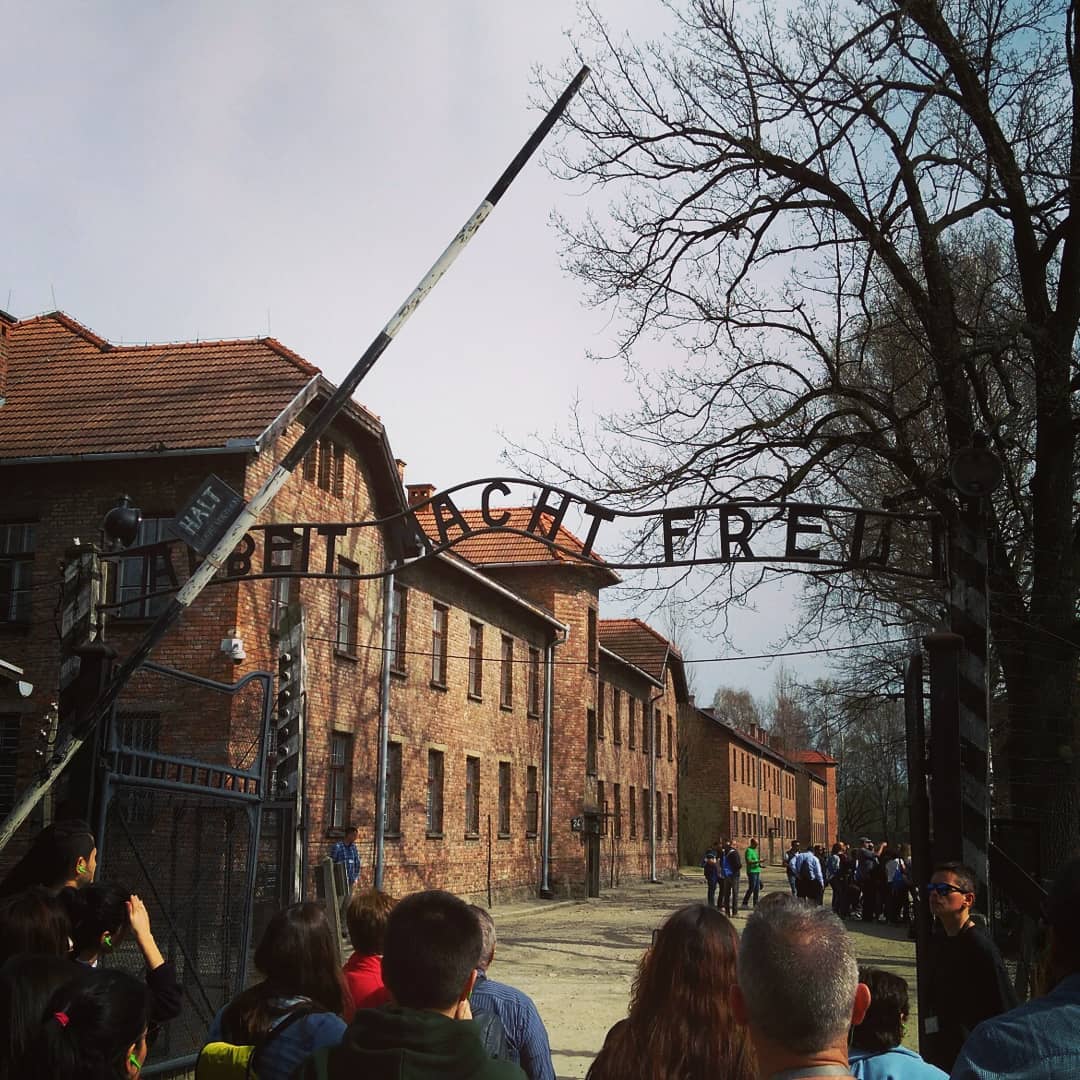 At the gates of Auschwitz

The Nazis took pleasure in their torture. They set-up orchestras at the entrance of the camp. Behind the death block, they had their own recreational swimming pools. Dr Mengele’s inhumane human experiments on identical twins and dwarfs in particular.

The Nazis went to unbelievable lengths to deceive and dehumanise their prisoners. In doing so, they abdicated their humanity. It is only right and just that we re-humanise the victims by visiting these camps and paying our respects wherever we may be around the world in our own way. Auschwitz is infamous for tattooing their prisoners with numbers. They converted them into numbers – we memorialise their names… 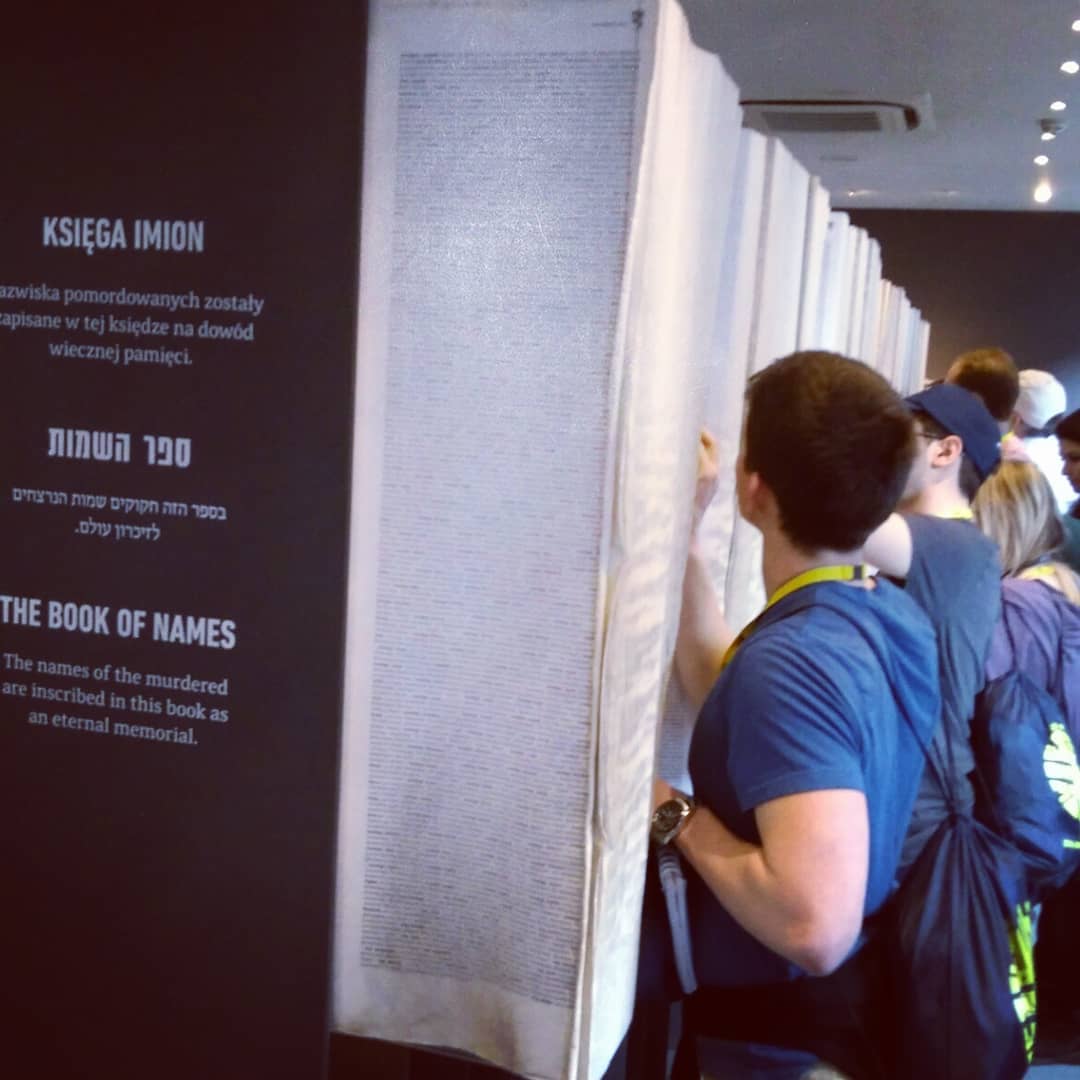 Krakow, Auschwitz Birkenau: The March of the Living

We spent our final morning in Krakow visiting the different synagogues in the old Jewish Quarter. The Rema’s shul built in the 16th century is well maintained and it is the burial place of R’ Moshe Isserles sometimes called the ‘Maimonedes of Polish Jewry”. There isn’t much left of Schindler’s factory but the building still represents a fortress of humanity. In the Galicia Museum, we were treated with speeches from Labour MP Joan Ryan and Sir Eric Pickles.

The intense 5-day journey culminates with the hundreds of delegations marching together in the much anticipated March of the Living from Birkenau to Auschwitz. Personally, the most powerful sight was witnessing holocaust survivors walk hand in hand with their grandchildren in defiance and seeing the train tracks filled with hundreds of personal messages from Jewish youth reconnecting with their history. 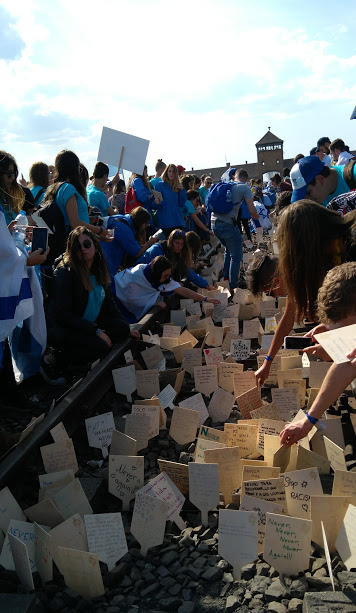 One cannot escape from the cruelty and evil that human beings were capable of perpetrating, nevertheless, one can focus on the positive aspects and commemorate the moments of heroism, mercy and true altruism exhibited by thousands of Jewish and non-Jewish individuals. One can pay tribute to the moral courage and bravery shown by the Righteous Among the Nations and honour the great sacrifice of the allied soldiers who died fighting the Germans.

We can celebrate the life the Nazis did not manage to extinguish. The survival and continuation of the Jewish people as well as the re-establishment of a Jewish homeland which is a safe-haven for all Jews whatever their background whatever their situation. 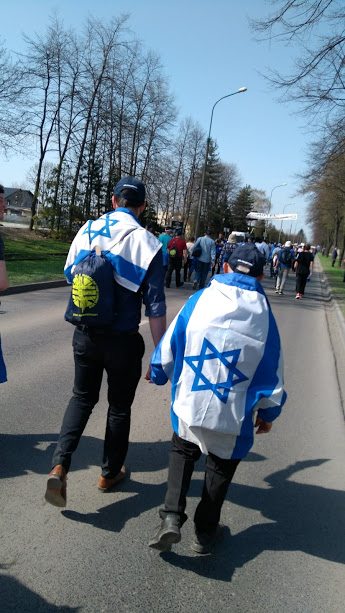 Passover, and the tradition of Seder night where we recount the slavery and exodus from Egypt nearly 3,000 years ago. prove that we aren’t a nation that forgets easily but simultaneously, we aren’t a nation that dwells on our misfortunes either. We demand justice but we live in the present and we do not embrace a victimhood mentality. This dichotomy is certainly not easy to absorb but as Elie Wiesel said, “Even in darkness it is possible to create light”.

About the Author
Avi Garson is Campus Director at the Pinsker Centre. He holds a Politics BSc from City, University of London and is currently working towards a MSc in Security Studies at UCL whilst attending the Evening Beis programme. Born in London he grew up in Gibraltar and then spent two years in Gateshead Yeshiva followed by a year in Midrash Shmuel, Jerusalem.
Comments