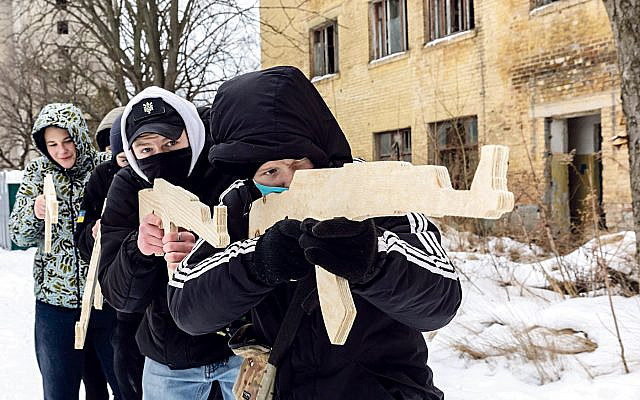 Territorial defense exercises amid the threat of a Russian military invasion of Ukraine. Military exercises for civilians in Kyiv, Ukraine

Jews first came to Iive in the Ukraine well over 1,000 years ago. At their peak in the 19th century over 35% of the Ukrainian population were Jews. Before the Second World War there were close on two million of them.

They had, of course, suffered pogroms and massacres. 30,000 are estimated to have died in an uprising in 1648. Another 30,000 in pogroms after the First World War. A million died in the Holocaust.

By 1989 only 500,000 remained and even by the Israeli Law of Return, only 200,000 Jews with Ukrainian ancestors appear to qualify. Large numbers have gone on Aliyah to Israel since the war and many hundreds of thousands emigrated to America in the years gone by. Among their descendants are Leonard Bernstein, Bob Dylan, Mel Brooks, and Steven Spielberg. Golda Meir was born in Kiev. In a recent census in the Ukraine there were only 56,000 Jews who identified themselves as such.

It is not suggested that either actually lay tephillin or wears a tsitsis but to the present Ukrainian population their religion is not important. Zelensky was, in fact, a very popular comedian on Ukrainian TV. Ukrainians are now more concerned with patriotism than religious observance.

There have been very few antisemitic incidents in the country in recent years. antisemitism was made illegal in September 2021. A large memorial to those who died in one of the worst atrocities in the war, the massacre of Babi Yar, has been unveiled. Over 30,000 Jews were exterminated in the ravine outside Kiev in September 1941. Amid all the tragedies over the centuries, however, the Ukraine gave birth to the Hasidim.

In Ukrainian history much of the responsibility for antisemitism was down to the Russians who ruled it. Part of the Ukraine was designated the Pale of Settlement by Catherine the Great in 1791 and the Jews were only allowed to live within its borders.
In Russia today antisemitism is not a major problem. In 2018 seventeen Russians were convicted of antisemitism and while there are individual instances of antisemitism, the days of pogroms are long past. President Putin has been helped by a considerable number of Jewish entrepreneurs,  many of whom are comfortably living in Britain.

It’s difficult to say why the oldest hatred attracts support. Still there are many Jewish and Israeli organisation who stand by, ready to help communities who fall victim to antisemitism. The Falashas had to be evacuated from Ethiopia in Operation Solomon in 1991. The Romanian Jews were bought permission to go on Aliyah to Israel from the Romanian president, Nicolae Ceausescu. That cost millions in bribes between 1965 and 1989.

The history of the Jews in the Ukraine makes one wonder just how long the present tolerance will last. Certainly, they should be thankful for small mercies but it would be wise for the charitable Jewish organisations to stay on the alert. When the threat of a Russian invasion seemed likely recently, arrangements were made to evacuate any Jew who wanted to leave the Ukraine. The Babi Yar memorial, however, has been financed by two Jewish billionaires. The community is still playing its part in supporting the Ukrainian economy.