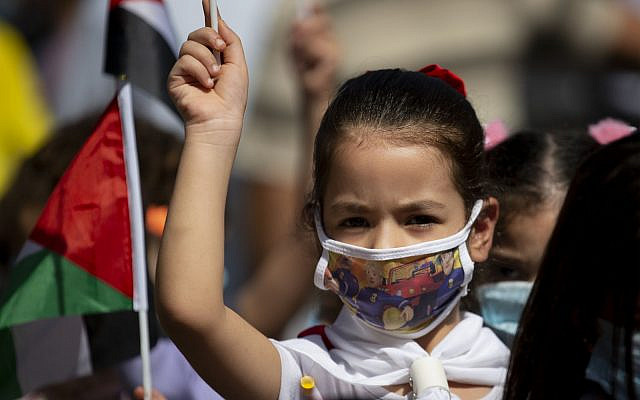 A Palestinian girl wearing a protective face mask amid the coronavirus pandemic takes part in a rally in support of Palestinian President Mahmoud Abbas in the West Bank town of Tubas, Sunday, Sept. 27, 2020. (AP Photo/Majdi Mohammed)

After what the Palestinian Authority (PA) perceived as a betrayal when the UAE and Bahrain normalized ties with Israel and an added slap in the face when Mahmoud Abbas failed to muster an Arab League condemnation of their diplomatic moves, Abbas has suddenly been struck by the urgent need for Palestinian unity and elections.

Abbas, it seems, sought to respond to the Arab governments’ indifference to his continual whining by reaffirming, through elections, the legitimacy of his long-expired mandate to rule as president of the PA. While elections and unity are genuinely needed, the call to hold them is but a ploy by corrupt and defunct Palestinian leadership both in Ramallah and Gaza.

Here is why I believe neither elections nor unity will materialize, and why, under current conditions, they actually should not take place:

In elections for the presidency of the PA, Abbas would lose. In public opinion polls in the Occupied Palestinian Territories, more than 60 percent of Palestinians want Abbas to resign. Unless the Fatah faction nominated someone else – which is unlikely — they would likely lose leadership of the PA. Unfortunately, Abbas, even at the advanced age of 84, won’t let go of the reins of power out of fear that he and his sons would be brought to justice for corruption and embezzlement.

The current system is antiquated and rigged. It will not permit new, independent young men and women the opportunity to enter politics. True elections do not mean merely shuffling the cards. Fatah’s members of the Legislative Council are finished. The Palestinian people demand new blood, new faces, new ideas, and people who are not corrupted by the system.

The danger of a Hamas victory: Yes, Palestinians want unity but, unity under a theocracy? An Islamic state in Palestine, even one that is democratically elected, is unacceptable under any circumstances. Palestine must never be run by mullahs, religion belongs at home. If Hamas wants to impose its theocracy on Palestine, then to hell with Hamas. We do not need it – not in the name of unity nor in the guise of getting rid of the occupation. Palestine is secular and must remain so.

Ultimately, Israel calls the shots. Palestinians can plan for elections within six months or a year, but have they forgotten that they are under occupation? If the occupier Israel chooses to disrupt elections in the West Bank, it can easily do so. For example, it can simply ban East Jerusalem Palestinians from participating in elections by refusing to renew their benefits or identity cards if they are found to have voted in the Palestinian elections. Palestinians in Gaza can vote, and (short of bombing Gaza on election day) Israel cannot stop them.

Adding to the local complications of a potential Palestinian elections, are the new regional hosts for negotiations among the factions. The election and unity talks are being held in Turkey and Qatar. Previously, Egypt traditionally oversaw reconciliation talks between Hamas and Fatah. The fact that the talks are now being held in those two countries clearly implies a regional shift in preference among current Palestinian leaders. The Turkish-Qatari alliance is bitterly opposed to the rest of the Arab Gulf. The Turkish-Qatari alliance is supportive of the Muslim Brotherhood – an ominous sign for Palestine should the unity and election talks, ever succeed.

A central reason why Abbas has called for unity talks and elections is economic. The World Bank is estimating that, with the pandemic, the poverty level in the West Bank will double this year to over 30%, while in the Gaza Strip it will jump to 64% of the population. In the first seven months of 2019, aid from the Arab countries to the PA totaled $267 million. During the same period of 2020, it dropped to a mere $38 million. And in May, because of Netanyahu’s threat to annex the Jordan Valley the PA stopped accepting the tax revenue Israel collects on its behalf. The average monthly tax revenue, which exceeds $190 million, represents over 50% of the PA’s budget.

In other words, the PA is close to being financially bankrupt, if not already bankrupt and highly dependent on local bank loans. Approximately 150,000 civil servants and security-related employees depend on salaries from the PA. These people have been receiving 50 percent of their salaries or less since May 2020 because Abbas refuses to accept taxes collected by Israel that belong to the Palestinian people.

If you are the head of a family in the West Bank or Gaza, how would you feel about politicians playing with the livelihood of your family and depriving you and your children of life’s basic necessities?

Politics or not, those families would say, the Palestinian decisionmakers are not suffering. They have their cars, their bodyguards, their three meals a day, their health care needs, their Israeli-issued VIP passes, and everything else they desire. The politicians are viewed as playing politics with people’s lives and their basic needs. As I was told recently by a prominent individual in the West Bank, the only link that exists now between the PA and many of the people in the West Bank is the economic dependence of those people on the PA – nothing more, nothing less.

Elections are sorely needed both in the West Bank and Gaza and they should include Palestinians in East Jerusalem. However, the elections should not be for a predetermined list, preselected to ensure that those who are in power now continue to be in power for years to come.

Abbas should not even be considered for any position in the event elections are held. With his ill-gotten wealth, he should find a nice villa in the Alps and retire there permanently. The perennial failed leadership should make space for new blood – the entire executive committee of the PLO should resign; all of Fatah’s central committee should resign; and Hamas’s current leadership should be sacked. In fact, at the moment, Gaza is the only place where elections can realistically be held without Israeli interference. Elections should be held there. Let all the parties run, and let a new, hopefully, progressive leadership emerge.

And, here is a revelation. Most voters are independents. In the United States, for example, there are more independents than Republicans. In Palestine, undoubtedly, there are more independents than members affiliated with all parties combined. Given the number of independents, they have to have a fair share of seats to reflect their numbers. They are closer and more sensitive to the needs of the people rather than their allegiance to their parties. In other words, Fatah, Hamas and the other parties combined should be in the minority while independents should have the largest number of seats in the Legislative Council and the PLO’s various legislative bodies and its executive committee.

Finally, a word to Israelis

True, you might, within a year or several years, establish diplomatic ties with all the Arab states and sideline dealing with the Palestinians and the occupied territories. As someone who strives for peace, let me be blunt: Your source of peace is right next to you. Unless you make peace with the Palestinians and agree with them on a fair and equitable two-state solution that meets the basic demands of the Palestinian people, you will never have peace and security.

Or, would Israel and world Jewry prefer to have a de facto bi-national state?

Make peace with your neighbors — the Palestinians — and you will be secure and at peace. With the near demise of the most cunning and most sleazy of all your prime ministers, Benjamin Netanyahu, you, the Israelis might finally have the real peace that 77% of you have recently said you would rather have over annexation and occupation.