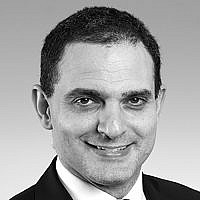 The Blogs
Sebastien Levi
Apply for a Blog
Advertisement
Please note that the posts on The Blogs are contributed by third parties. The opinions, facts and any media content in them are presented solely by the authors, and neither The Times of Israel nor its partners assume any responsibility for them. Please contact us in case of abuse. In case of abuse,
Report this post.

Last Sunday, we lit the last candle of Hanukkah. The following Tuesday, Matteo Salvini, Italy’s Far-right Deputy prime Minister, arrived in Israel, greeted and welcomed as a friend by Israel’s prime Minister, Benjamin Netanyahu. The “light unto the nations”, which has defined Israel since its creation, is getting darker by the day, and the Hanukkah Holiday, that reminds us of the power of light and hope, is a good time to reflect on this disturbing reality.

In the past few months, Israel received officially Philippine’s Duterte, the Czech President, the Prime Minister of Poland and Austria, and also President Viktor Orban from Hungary, with visits of Yad Vashem, the Knesset and the Western Wall, and meetings with the highest authorities of the countries.

All these leaders share a common contempt for the free press and the rule of law, aggressiveness toward minorities (sexual or ethnic), crude nationalism and all have had (or their parties) rather ambiguous stance toward the Jews.

Netanyahu has also fully embraced Trump, and not surprisingly Israel is the only country with Russia where Trump is more popular than Obama, where the population is the most hostile, among the western world, to migrants and refugees.

Israel also sold some security systems to Saudi government, that led ultimately to Khashoggi’s death. And quite logically Israel has firmly lobbied Trump and his administration to stand up to MBS in the wake of this horrendous assassination, in the name of the kingdom’s stability and in the common fight against Iran.

Max Boot from the Washington Post put it perfectly in a recent column, stating that “But Italy has never claimed a moral mission in the world. Israel has. It’s understandable that Israel would employ brutal tactics such as targeted killings to ensure its own survival. But there is no excuse for enabling foreign oppression for profit”.

For the people prompt to see Max Boot as an anti-Semite, he is a Jewish conservative columnist, standing with Israel’s security on multiple occasions.

Even, and especially if it hurts, let’s admit it: Israel behaves less and less as an enlightened western liberal democracy, but more and more as a proud member of the illiberal democracies that are gaining ground everywhere in the world.

What was the rush to invite Duterte? Why was Bibi the first leader to congratulate Bolsonaro? How can Netanyahu receive Orban in Israel, without a word about his incendiary rhetoric against the migrants? How can Netanyahu shamefully accept to rewrite the history of the Holocaust to please the Polish and Hungarian governments, just for the sake of support for his policies? Mr Netanyahu, who are you to use Jewish History to your own political or even diplomatic profit?

This is shameful because Israel’s government behaves as a cold state when it suits its interests, but does not hesitate to claim it is a special state, speaking on behalf of all Jews, when attacked. So what is it? A “normal country” or a country that speaks on behalf of all the Jews of today and yesterday?

And this cynicism is all the more unforgivable as Israel’s government gives a stamp of approval that goes beyond the natural diplomatic ties. This embrace carries with it the Jewish heritage, including the persecutions we had to go through, and therefore whitewashes the worst instincts of those countries.

The cynical use of Jewish persecutions, even of the Shoah, to defend the worst alliances will be one of the most unforgivable stains of Netanyahu’s tenure as Israel’s Prime Minister.

Netanyahu has also been able to taint Jerusalem. This city has been central to Jewish dreams and aspirations throughout their history, but converting this aspiration as the ultimate diplomatic prize for Israel is a shame, it degrades Jerusalem that becomes today a political ploy and not a shared dream for the Jews it has always been.

The Israeli government shamelessly gives a stamp of approval to the worst regimes in the world, as long as they pay lip service to Israel’s policies. In other words: bigotry is acceptable as long as settlements are defended, the embassy transferred to Jerusalem, and/ or the Palestinians’ very existence as a people denied.

Israel is a country and it has to abide with its national interests. It accepted German reparations in the wake of the Holocaust, It dealt with South Africa during the Apartheid, it sold weapons to un-democratic regimes but it did not brag about this. Some call this hypocrisy, I’ll call them minimum decency.

There is an indisputable pattern here: realpolitik to the extreme. I actually suspect Netanyahu to enjoy the renewed role of pariah among the nations, that he can use effectively in domestic politics. In the dark times liberal democracies are going through, being on the dark side is probably a booster for one’s popularity, especially in Israel when the slogan “the entire world is against us” has proven so effective time and again.

George H W Bush, who passed away last week, spoke eloquently about the thousand points of light that define the USA. His predecessor, Ronald Reagan, saw the US as the shining city on the hill. And as we just celebrated the last night of Hanukkah, it is worth remembering that Israel’s national symbol is a Menorah, the “light unto the nations” that have made Jews around the world so proud of Israel since its creations, despite its flaws.

Even a fading light like the one in the temple did not go away and we need to keep this hope alive that the darkness will not prevail, that the Israeli people will again “see the light” and  elect a leader that will not see Tikkun Olam, principles and morality, both from a collective and personal stand point, as naive liberal points of view but as a mission to fulfill.