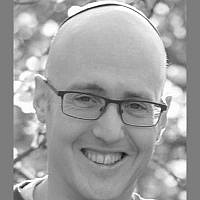 The Blogs
Simon Levy
Apply for a Blog
Advertisement
Please note that the posts on The Blogs are contributed by third parties. The opinions, facts and any media content in them are presented solely by the authors, and neither The Times of Israel nor its partners assume any responsibility for them. Please contact us in case of abuse. In case of abuse,
Report this post.

In a line that was voted by the AFI as the 11th best in films, the sadistic captain of the prison camp interrupts his brutal treatment of Paul Newman’s character to state that, “What we’ve got here is failure to communicate”. This sprang immediately to mind when reading various views and thoughts espoused by a variety of individuals in response to Rav Noam Perel’s statement last week.

Amongst others, Joel Haber writes on these pages (https://blogs.timesofisrael.com/revenge-revenge-you-shall-pursue/) that revenge is not a Jewish concept, Rav Michael Melchior states that Rav Perl must “go home” (https://blogs.timesofisrael.com/rabbi-noam-perel-go-home/) and Anton Goodman in Haaretz calls on World Bnei Akiva to dismiss Rav Perel and overhaul its leadership (http://www.haaretz.com/jewish-world/jewish-world-opinions/.premium-1.603085).

To a large degree, the blogs above, and others that have been publicised, have sought to categorise revenge as collective punishment on the Palestinian People and some have equated Rav Perel’s statement with the actions of Hamas themselves. As an introduction, the trusty Oxford dictionary defies the word as, “The action of hurting or harming someone in return for an injury or wrong suffered at their hands”, and my strong feeling is that this definition has become lost amongst the vitriol being hurled from both sides of what has become an increasingly unpleasant dispute. Whilst Anton Goodman describes the many influential Bnei Akiva committee members who pulled the agenda to a less nuanced space with more one-sided views, I would hope that this is not a generic slight on the more right-wing members who find their home in Bnei Akiva.

Before looking at the text of Rav Perel’s statement, it is essential to first examine what Judaism’s view of revenge actually is. For the purposes of this blog, we need to put aside the myriad of sources that deal with the Jewish People’s call to G-d to avenge them, as these do not deal with what we as a nation are, or are not, permitted to do ourselves. Prayers such as Shefokh Hamatkha in the hagada, a prayer to call on G-d to pour His wrath on our enemies and the last verses in Psalm 137 cannot be used to support a human-inspired revenge on our enemies.

Nonetheless, there are many sources that do indeed support the concept of human-inspired revenge. In the story of the rape of Dina, Shimon and Levi wipe out the entire inhabitants of Shehem and the commentators discuss the reasoning behind their actions. The Rambam writes as follows;

How must the nations fulfil the commandment to establish laws and courts? They are obligated to set up judges and magistrates in every major city to render judgement concerning these six mitsvot and to admonish the people regarding their observance.

A person who transgresses these seven commands shall be executed by decapitation. For this reason, all the inhabitants of Shehem were obligated to die, since Shehem kidnapped and the inhabitants saw and were aware of his deeds, but did not judge him.

In a different approach to the episode, the Ramban writes that there is no obligation included within the 7 Noachide Laws to create a system of law, and the actions of Shimon and Levi were motivated by a desire to avenge the violation of their sister. Even though Yaakov does indeed criticise their actions, the Torah does not condemn their actions, and even when Yaakov alludes to this episode at the end of Bereishit, this is a criticism of their motivations. Rav Amnon Bazak states that,

Even if the killing of Shekhem and Chamor was justified, and even if the case could be made for killing all the men of Shekhem, the plundering of the city was not only unjustified, but actually nullified any possible moral justification for killing the city’s inhabitants. The taking of the spoils casts a dark moral stain on the act itself, presenting it as an endeavor undertaken out of personal interests.

This of course connects us back to our definition above, and the fact that revenge cannot be motivated by external factors or emotions, but must rather be predicated on dealing a moral lesson to our enemies.

Notwithstanding the above, two further modern writings should inform our view that revenge is indeed a valid course of action. Rav Soloveitchik, in his seminal piece Kol Dodi Dofek writes as follows,

For the first time in the history of our exile, divine providence has surprised our enemies with the sensational discovery that Jewish blood is not free for the taking, is not hefker! If anto-Semites wish to describe this phenomenon as “an eye for an eye”, so be it; we will agree with them. If we wish to heroically defend our national-historical existence, we must, at times, interpret the verse “an eye for an eye” (Exodus 21:24) literally. How many eyes did we lose during the course of our bitter exile because we did not return blow for blow… I am certain that everyone who knows me knows that I am a believer in the Oral Law and, consequently, that I do not doubt that the verse refers to monetary compensation… However, with regard to Nasser or the Mufti I would demand that we interpret the phrase “an eye for an eye” in a strictly literal sense – as referring to the removal of the concrete, actual eye. Pay no attention to the fine phrases of well-known Jewish assimilationists or socialists… who publicly declaim that it is forbidden for Jews to take revenge at any time, any place, and under all circumstances. Vanity of vanities! Revenge is forbidden when it serves no purpose, However, if by taking revenge we raise ourselves up to the plane of self-defence, then it becomes the elementary right of man qua man to avenge the wrongs inflicted upon him.

In 1954, R. Shaul Israeli wrote an article in Tehumin in response to the killing of civilians in Qibya. He argued that civilians who conspire to assist others in military operations can be killed under the rubrix of rodef, a Jewish Law that permits a person to kill a pursuer who is intent on taking his life. R. Israeli makes clear that this is not a collective punishment, as only those who are guilty (either in murder or conspiracy to commit such acts) are punished. Of course, all would agree that the murder of Mohammad Abu Khdair is to be treated like any other murder, a vile and heinous crime to be punished with the full weight of the law.

Whilst the above presents one side of the story, I would not pretend that there are not sources that could be used to argue the other side of the story (and indeed R. Hayyim David HaLevi dismisses the above description of a pursuer). Nonetheless, what I have set out to do is to dismiss the view that revenge is not a Jewish concept.

If so, why have I entitled this blog a failure to communicate? If all the above is indeed correct, what criticisms can be authentically levelled at Rav Perel?

Hippocrates – “The chief virtue that language can have is clarity.”

His apology this morning aside, my belief is that Rav Perel meant to communicate a similar message to that which I have constructed above. I sincerely doubt that his call for revenge included innocent people, uninvolved in the events of the last few weeks. His use of the quote from the Book of Samuel, when King Saul instructs David to take revenge on the Philistines, was an example of a valid revenge in the Bible, and yet easily misconstrued without a clear introduction to the topic. Likewise his call for the army to become an instrument of revenge – on its own, easily misunderstood, but I believe could have been encompassed into a valid message with the requisite explanation.

However, as Head of an Educational Organisation, a person must always consider whether their message is likely to be misconstrued, and in this case, taken as a call to arms. As stated above, revenge is directed solely at the perpetrator of violence, but the word has been misused so many times, it behoves us who use it in its original form to be mindful of this potential mistake. Likewise, a message of revenge contained in only a few lines cannot possibly be understood in its entirety by a casual reader, and must be explained and introduced in a crystal clear manner.

In any case, a large amount of damage has been done, and a lack of clarity is to a large extent to blame for this. The World Leadership of Bnei Akiva is best placed to judge whether Rav Perel’s position has become untenable, but no matter what their decision, I would hope that Bnei Akiva continues to feel comfortable expressing a full gamut of ideological positions, albeit with a clarity of message that may have been lacking on this occasion.

About the Author
Before making aliya, Simon worked in many roles within Jewish Education in the UK, including as the National Director of Bnei Akiva UK, teaching Jewish Studies and heading Mizrachi UK. In Israel, he has continued in the world of education, including as the Director of Education for Lavi Olami, an educational consultant for the National Library of Israel and Director of Educational Projects for the Shabbat Project. He writes in a personal capacity.
Comments