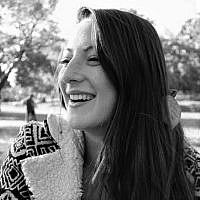 The Blogs
Leora Kaufman
Apply for a Blog
Advertisement
Please note that the posts on The Blogs are contributed by third parties. The opinions, facts and any media content in them are presented solely by the authors, and neither The Times of Israel nor its partners assume any responsibility for them. Please contact us in case of abuse. In case of abuse,
Report this post.

The day after elections here in Israel. The ballots mostly counted, the results are clear, and half of the country is distraught by the outcome —a far-right coalition with Bibi as PM, again.

Yet, as always in Israel, and perhaps also in the world, daily life goes on.

My dad is visiting Israel to meet his newest granddaughter. We’re mostly spending time at home, cuddling the baby and making breakfast. But today, on a whim, we decide to leave my apartment (where I’ve been hunkered down, recovering from childbirth and nursing all day) and drive to Haifa. We spend the day in a cable car, in cafes, roaming the streets, and calming 6-week-old Ariel who is having a particularly fussy day. She wanted to stay home and nobody consulted her.

At dusk, we’re quite hungry. Dad suggests we find falafel. It’s such an obvious food choice in Israel. I want to suggest something else; we’re in the city, so why not try a more interesting cuisine?

But Dad’s the guest, and he’s after the falafel to match the perfection he used to get at that little hole-in-the-wall place on West 4th street back in the 70s. He hasn’t found a falafel that measured up since.

A true millennial, I google “best falafel in Haifa,” and promptly plug in the address to google maps. George’s Falafel— 15-minute drive. Yalla.

We’re about halfway there when Ariel starts screaming. I have no choice but to pull over and nurse her. Once she calms down, we’re about 1.5 Kilometers away from the restaurant and it’s closing in 40 minutes. I decide not to put her back in her car seat—we’ll walk there and get a tour of Haifa on the way, I suggest. Really, I know that Ariel sleeps best in the carrier, so we head to George’s falafel on foot.

On the way, we pass the Baha’i gardens—a spiritual landmark of the world’s most peaceful faith—and then enter what appears to be a predominantly Arab part of town. Suddenly all of the signs are in Arabic and we hear mostly Arabic around us.

The sun is setting and it’s getting chilly out. We have about 15 minutes until the falafel place closes, but we persist.

It’s supposedly the best falafel in Haifa, and we are determined.

We make it to George’s and are somewhat surprised to see that it’s a tiny corner spot, with just a few high stools and an unimpressive toppings bar under bright-white lights. A few pictures of Jesus hang on the wall. An elderly, mustached man is cleaning. The woman behind the stand greets us with a smile—“two servings?” She asks in Hebrew with an Arabic accent.

We order, knowing that one of us will have to hold Ariel while the other sits to eat.

“No stroller?” Asks the woman.

I hesitate for a moment. Should I hand my 6-week-old baby to a stranger?

And we sit and eat in peace.

And the falafel is great.

Better yet, Ariel remains fast asleep in her arms.

A customer comes in and she doesn’t budge from her chair, where she’s cradling Ariel and smiling at her.

I promptly finish my falafel, thank her, and strap Ariel in the carrier.

“Now I see why your stand is rated 5 stars! Falafel and babysitting service!”

“No problem at all.” The woman smiles.

I tell my dad that this is the epitome of an “only in Israel moment.”

“Oh, and by the way,” she says as we walk out the door. “It’s chilly out. You should put some socks on her.”

About the Author
New York expat gone Israeli lone soldier, Leora's heart was always in the East. She is an explorer of Judaism and mysticism, an observer of the human condition, a yoga enthusiast and a non-militant vegetarian. She enjoys weaving feelings into words and talking about all things Israel.
Related Topics
Related Posts