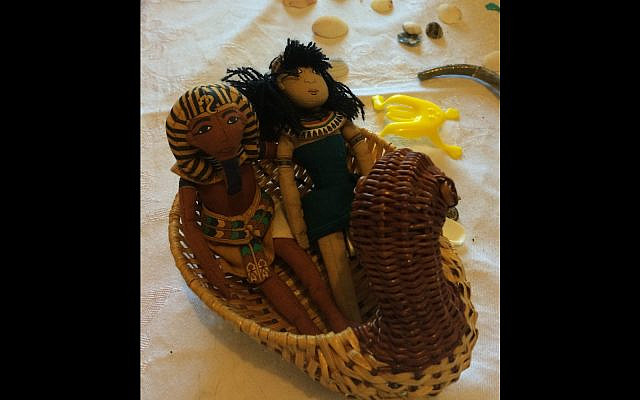 Parshat Shemot encompasses all the complexity of being a feminist Jew. What alienates us; what thrills us. How we read.

The family dramas and traumas of Genesis reached their denouement with the end of that book. The second, Exodus, opens with a list proclaiming, “These are the names of those who came to Egypt”– “הבאים מצרימה.” The speaker’s perspective is from there, Egypt.

Distressingly, the list is entirely of men. Reuven, Shimon, Levi, and so on—listing eleven names, Yosef, the text states, being already in Egypt.

Not a single woman. Though the text relates the total count of the group as 70. Women, of course, are there. Yet effaced. A very familiar reality to women in this tradition.

The text goes on to a central point, that the Israelites “were fertile and prolific, they multiplied and increased very greatly, so that the land was filled with them” (JPS translation). It is impossible to convey fully the multiplication of verbs the Hebrew uses to convey just how “prolific” the group was.

Unless we are to believe that the Israelite men propagated without women, there were women among the “children” or “sons” (depending on how one translates, “benei”) of Jacob/ Israel who came to Egypt. But their names are omitted; they are effaced. As many have noted, prominently, Judith Plaskow in her book, Standing Again at Sinai, when the text references “the people,” ha’am, it means men. Women are “Other.”

But then we get some extraordinary stuff.

The text moves swiftly to tell us that the people and their prolific offspring were enslaved and were worked very bitterly and hard.

And then the Pharaoh commands “the midwives to the Hebrews” to slay all males upon birth. The wording of the Hebrew is ambiguous. “lameyaldot ha’ivriyot” –”למילדות העבריות ” can  mean, as it is commonly translated, “the Hebrew midwives,” or it can mean the translation I give. Which means the midwives were Egyptian.

I once discussed this with the eminent Biblical scholar, Tikva Frymer Kensky, whom I was privileged to have as a colleague and friend. Tikva argued, against my position, that something as sensitive as midwifing was done within, not across, ethnic groups in the ancient world. But I think the text makes clear that that was not so in this instance—and in any case, the point of these texts is not to convey history (though historical evidence is conveyed inadvertently), but “teaching”—torah.

Can we imagine the conversation between Pharaoh and the midwives that the text gives us, occuring if the latter were Hebrew? He tells them, “when you midwife the Hebrews”—the Otherness of that group is common to speaker and audience. He does not threaten them, which we would expect if he were addressing slaves. Then there is the biblical narrator’s observation that these midwives “had awe for” or better, “saw, perceived,” God– and therefore, disobeyed Pharaoh. Would this observation make sense about Hebrew midwives? Not half as much sense as it makes if we assume the midwives were Egyptian, called by their ruler and addressed as one of his own, from whom he could expect compliance to him. Not awe of the God of the Hebrews.

We then get the patently absurd response that the midwives, Shifra and Puah, give Pharaoh, about how the Hebrew women give birth like animals, before midwives appear. To cite Ilana Pardes (Countertraditions in the Bible: A Feminist Approach, p.82), the midwives “deceive Pharaoh by confirming his racist anxieties concerning the proliferation of the Hebrew slaves. Relying on a common racist notion, according to which the Other [women; Hebrews; Jews; people of color are] closer to Nature, Shiphrah and Puah claim that the Hebrew women need no midwives for, unlike Egyptian women, they are animal-like…”

And Pharoah—who may be immensely powerful but everything we hear about him says he is not smart, indeed, quite stupid—then leaves it to “all his people,” not a professional class among them, to murder male Hebrew newborns. Setting Egyptians per se against Hebrews.

The text tells us the name of these women: Shifrah, Puah. Women’s names are notable in their presence, standing out against normative effacement. And here we not only get their names but are told that God favored them for what they did by giving them “houses,” or “households.” Surely, this does not mean physical structures, but Memory, zekher—an attribute ascribed normatively to men, which attribute, indeed, defines “male,” zakhar, in Hebrew, as opposed to the horrifically descriptive androcentric name for “female” in Hebrew, “nekevah.” And indeed, their names endure.

The text then proceeds to the story of Pharoah’s daughter—unnamed here (the rabbis pointedly name her “Batya,” “daughter of God”—not daughter of Pharaoh—she, like Moses, is adopted), who knows very well the ethnic identity of the baby she rescues, and who, like the Egyptian midwives, defies her father in saving him, and goes further, bringing the weaned baby into his palace and raising him under his roof, having conferred on Moses the name, also Egyptian, by which he has been enshrined in Jewish and universal lore.

These acts are the beginning of the Redemption from Egypt, which began with– was sparked by– human resistance, as Arthur Waskow noted long ago in his Seasons of Our Joy. Resistance expressed by the Hebrews, particularly, as the midrash about Miriam teaches, by the women, who persisted in bringing abundant new life despite terrible circumstances, and by the midwives and Pharoah’s daughter, who defied evil, refused to collude with it; who recognized that evil is a universal category, not one contingent on ethnic group or power, and same for good.

This is a lesson left to us, the descendants of the original audiences for these texts, to ponder, too: do we choose to read the text as saying that the midwives were Hebrew—because only we can, do, will, take care of our own? Or do we recognize that good people, whatever group they belong to, recognize Good and Evil, regardless of its source or target, and act accordingly– and demand that standard, of others and ourselves? The “Righteous Among the Nations” existed then, too. Then, as later, a small but pivotal minority.

Then we hear how Moses “goes out”— of Pharaoh’s palace, out of privilege, to seek his “kinsfolk.” Which means that Pharoah’s daughter had told him who he was; another act of defiance, of radical honesty– tied traits. And that Moses, who could have chosen differently, chose not to turn his back on that identity but instead, on privilege, and went out and embraced “his kin,” even if he could not then have grasped the full meaning of that embrace. It also means that he had learned well at his adoptive mother’s side that good is good and evil, evil, no matter who is doing either, for he sides with the Hebrew being beaten by another Hebrew, whom the text clearly labels, “the offender.” Victimhood does not convey absolution from responsibility, from the imperative not to imitate the ways of evil doers.

What made Moses leave the palace on that day, in particular? He was “grown” by this point, the text says. Why on this day does his awakening occur? Is “awakening,” such as Moses experienced it, synonymous with simply having grown (up)–  is it a function of chronological age? Or was he long “grown up,” but only awakened on this particular day?

A parallel question occurs about God. The Hebrews have long been enslaved and suffering. Yet God does not intervene. Then, God does. After the text says that the Hebrews cried out—stopped tolerating it. And after women started intervening against escalating evil.

Slavery appears to have been tolerated, tolerable, on both sides. It was, after all, ubiquitous in the ancient world, expected, certainly, of an empire like Egypt’s, built on slavery. But mass murdering babies, targeted by their ethnicity—that spoke, to some, across ethnic, religious, lines. And apparently, human and divine ones, too.

The rabbis effaced the name of Moses from the haggadah, lest we mistakenly come to see him as anything other than an agent of God’s intervention and idolize him. An admirable move. There is also no danger of Moses, Moshe, being effaced in our tradition. Women, on the other hand– So, it is right and proper at the Passover seder to recall the names and actions of Shifra, Puah, and Batya, and to teach from their behavior. I do so right after, “avadot/im hayyinu,” “we were slaves.”

I am the last person to downplay the androcentric, patriarchal, and often misogynistic nature of the Biblical text—or, most importantly, how those values continue to play out in religious outlook and practice. But I do think that other kernels are embedded there, ours for the seeing and acting upon. That is how I relate to the radical potential of the verse in Genesis 1:27—“God created the human in God’s image; in the image of God did God create the human; male and female did God create them–” and that is how I believe we should read these texts in Exodus, as Pardes rightly calls them, “countertraditions” within the text, residing there, awaiting the telling and teaching which is ours to perceive and embrace.

This is a teaching I bring to my seder table. On which, among other prompts, I put figurines I picked up at the Metropolitan Museum’s Egyptian wing, of Pharaoh, and, I say, of Batya, signifying the radical nature, and the absolute possibility, of human perception and human choice.