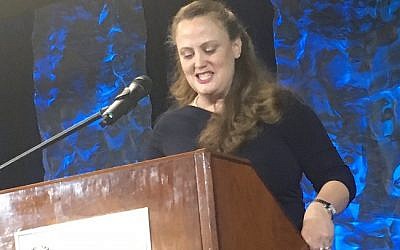 If Mae Cannon, executive director of Churches for Middle East Peace (CMEP), the lobby group that has stepped into the breach for the Palestinian Authority after the Trump Administration shut down the PLO’s diplomatic mission in 2018, ever finds herself testifying before Congress about U.S. foreign policy, she needs to be asked a few questions.

For instance, she should be asked, “Why are you helping to mainstream Al-Haq, a Palestinian ‘lawfare’ organization with ties to the PFLP, a terror organization responsible for numerous hijackings and the murder of dozens of Jews in the Holy Land?”

Cannon should also be asked if it’s appropriate for the leader of a church-supported nonprofit to promote an organization like Al-Haq, whose leader, Shawan Jabarin, is described by the Israeli Supreme Court in 2007 as “a Dr. Jekyll and Mr. Hyde” whose time was divided between leading “a human rights organization” and “as an operative in an organization [PFLP] which has no qualms regarding murder and attempted murder?” In 2008, the Israeli Supreme Court reaffirmed its assessment of Jabarin, declaring that he was “among the senior activists of the Popular Front terrorist organization.”

A senator or representative could ask if it is appropriate for Cannon to promote an organization whose ties to terrorist organizations were so serious and demonstrable that American  Express, Mastercard, and Visa stopped allowing their credit cards to be used to donate money to it.

Lawmakers could even ask if it is legitimate for an American nonprofit to describe in glowing terms an organization that uses the language of human rights and international law to advance the interests of the  Palestinian Authority, an authoritarian organization which oppresses Palestinians and denies Jews the right to self-determination while at the same time demanding the same right for the Palestinians.

Cannon shilled for Al-Haq in her most recent book Beyond Hashtag Activism: Comprehensive Justice in a Complicated Age, just published by InterVarsity Press, which describes itself as “the book publishing division of InterVarsity Christian Fellowship/USA, a movement of students and faculty active on campus at hundreds of universities, colleges and schools of nursing in the United States of America.”

In this book, Cannon lauds the work of two groups that use legal advocacy to promote social justice. The first group is the Equal Justice Initiative, which works to free wrongly convicted inmates from prison. The second group Cannon lauds is Al-Haq, headquartered in Ramallah. Citing Al-Haq’s website, Cannon describes its work as including “the documentation of human rights abuses, research, and studies on ‘interventions on breaches of international human rights and humanitarian law’ in East Jerusalem, the West Bank, and Gaza.”

What Cannon doesn’t seem to understand is that Al-Haq, like a lot of other Palestinian “civil society” organizations, deploys legal challenges not to achieve rights for the Palestinians, but to hinder the rights of Israeli Jews to exercise self-determination and deny them the right to life through lawless acts of terror.

For example, in 2017, Al-Haq’s leader Jabarin defended the Palestinian Authority’s “pay-to-slay” program which rewards Palestinian terrorists who murder Israeli civilians with regular salaries depending on the seriousness of the crimes committed (the more serious the crime, the more people killed or injured, the longer the sentence and the higher the salary).  If this pay-to-slay program were interrupted, Jabarin warned, “we are heading for a real crisis in Palestinian society and in due course toward an explosion.”

In other words, Jabarin deployed the threat of further violence to protect financial payments (paid for by Western democracies) to terrorists. This is not the way the leader of a legitimate human rights organization behaves, which brings us back to the questions Cannon and her publisher need to answer: is Al-Haq the type of organization that should be promoted in a Christian “peacemaking” text?

Cannon’s Christian readers might have another question for her and her publisher, InterVarsity Press. Is it really appropriate for Cannon to promote the work of Catherine Hoke, founder of the Prison Entrepreneurship Program, which trained inmates in Texas state prisons to become business owners? In her text, Cannon reports that Hoke’s program was deemed “hugely successful” and was highlighted by international news outlets including the Economist. She continues, “After a personal resignation scandal, Hoke moved back to New York City and started Defy Ventures, which utilizes a model similar to what she had been doing in Texas.”

Cannon’s use of the phrase “personal resignation scandal” is at best euphemistic and at worst dishonest.

What Cannon failed to report is that Hoke was forced to abandon her work with Texas inmates in 2009 after admitting that she had “inappropriately close relationships” with former inmates who had graduated from the PEP program.

Moreover, Hoke was forced to resign in 2018 as Chief Operating Officer at Defy Ventures (the organization that Cannon promoted in her book) after the Daily Beast recounted a number of allegations directed at Hoke (and the organization itself) by the organization’s president. The allegations (detailed here) include sexual harassment on Hoke’s part and corruption on the part of the nonprofit itself.

Despite all this, Cannon encouraged her Evangelical readers “to consider volunteering and supporting efforts such as those of Catherine Hoke through Defy Ventures.” Hopefully, the organization has reformed itself in the wake of Hoke’s departure, but still, Cannon’s Evangelical readers are clearly entitled to more information than she gave them.

Did anyone at InterVarsity Press even think of digging into the text?