It all starts with identity.

A national flag is an extremely important symbol for a sovereign country. The state of Israel’s flag has extra meaning.

For the Jewish People, their national flag history dates back to the ancient days of their wanderings in the Sinai desert after exiting Egypt. In the second chapter of Book of Numbers the bible mentions a flag for each tribe with its own unique color and symbol.

1The LORD said to Moses and Aaron: 2 “The children of Israel shall encamp every man by his own standard, with the banners of their fathers’ houses: at a distance from the Tent of Meeting shall they encamp around it.” (Numbers 2:2)

At that time the Nation of Israel was made up of twelve tribes. Each tribe had its own unique flag, mounted on a tall mast, around which all the tribe’s families encamped. When the time came to move on, they would dismantle their encampment and traveled together in a specific order, with their flag waving, onto the next chosen encampment area. At the center of the tribes’ camps stood the Tabernacle, the “Dwelling of God,” which was the symbol of union among the twelve tribes of the Nation of Israel.

When the Nation of Israel entered the Promised Land, Israel, they settled the land, each tribe in his own heritage, according to the division of the land, as the descendants of the twelve sons of the Forefather Jacob. The uniting factor was the Tabernacle, later to become the Holy Temple in Jerusalem. There is no mention in the Bible of one single flag that represented all of the People of Israel. Yet many of the symbols remained till today. The lion, the symbol of Judah; the candelabra of the Holy Temple; the olive branches, representing the oil which was used to light the candelabra at the Temple, and, of course, the Holy Torah scroll.

When the Romans exiled the Jewish people from their Homeland, Judea, it does not appear that the exiles carried any flag. Therefore, one might say that the Menorah and the Torah were the flags the Jews took with them into exile, and remained loyal to throughout the many centuries. Wherever Jews went in their long and bitter exile, they took with them their “Menorah” and “Torah” as their “National Flag.” 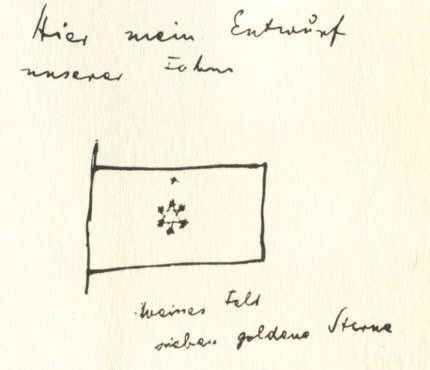 Herzl’s proposed flag, as sketched in his diaries. Although he drew a Star of David, he did not describe it as such.

Many centuries later, in 1896, Theodore Herzl, the founder of Zionism and the Zionist movement, presented the need to create a national flag for the Zionist movement. Herzl suggested a design for a flag that did not catch on, and David Wolffsohn, a Lithuanian-Jewish businessman, prominent early Zionist and second president of the Zionist Organization, made the following statement:

At the behest of our leader Herzl, I came to Basel (Switzerland) to make preparations for the Zionist Congress. Among many other problems that occupied me then was one that contained something of the essence of the Jewish problem. What flag would we hang in the Congress Hall? Then an idea struck me. We have a flag—it is in blue and white colors—it is the Talith (Jewish man’s prayer shawl) with which we, men, wrap ourselves when we pray; that is our symbol. Let us take this Talith from its bag and unroll it before the eyes of the Nation Israel and the eyes of all the nations. So I order a blue and white flag with the Shield of David painted upon it.

That is how the national flag that flew over the Jewish Congress Hall came into being.

And so, the flag of the Zionist movement, which represented the self determination of the Jewish people, their spirituality and service of God continued on to become the flag of the State of Israel. The symbolic beauty of the nation who was forced to leave its homeland thousands of years previously with the Torah, as the Word of God and as its flag, only to return with the Torah the Word of God and a new national flag, fashioned after the Jewish prayer shawl. That was truly visionary and creative.

There are those who oppose the design of the Jewish flag. However, this very design appears to be the most natural and appropriate flag image for the Jewish Homeland, the Jewish Nation, along their Jewish faith.

My flag is blue and white like the sea and the desert.