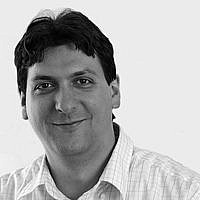 The Blogs
Chajm Guski
Apply for a Blog
Advertisement
Please note that the posts on The Blogs are contributed by third parties. The opinions, facts and any media content in them are presented solely by the authors, and neither The Times of Israel nor its partners assume any responsibility for them. Please contact us in case of abuse. In case of abuse,
Report this post. 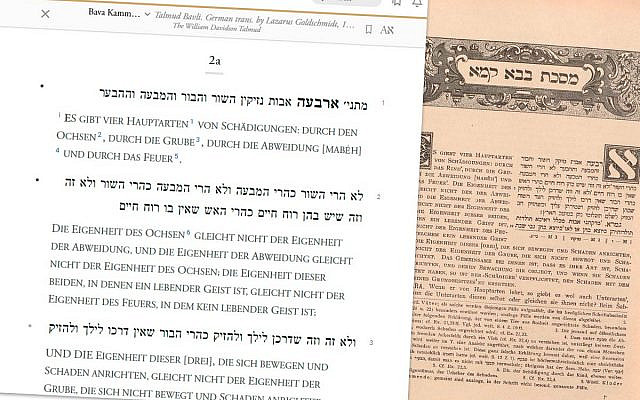 The Sefaria version of the Goldschmidt Talmud and the first edition.

The first and only German translation of the whole Talmud was the work of just one man: Elieser Lazarus Goldschmidt (17 December 1871 – 18 April 1950) translated all the tractates (masechtot) of the Talmud. Obviously, an incredibly complex task — 5422 folios of the Talmud had to be translated and along the way, Goldschmidt also compiled readings from various manuscripts and translated the Mishnah of those parts without Gemara.

This is even more remarkable considering that he only learned German from the age of 18 and there was no one to finance his project. Nevertheless — he started.

Goldschmidt learned Talmud as a young lad in the yeshiva Knesset Yisrael in Slobodka, then came (“on foot,” as the contemporary journal “Die Zukunft” put it) to Germany and turned to an academic career here. He studied “oriental languages,” translated the Book of Enoch from Ethiopic (back?) into Hebrew, translated the Sefer Yetzirah and later the Quran from the Arabic original. His translation of the whole Tanakh remained nearly unknown since it never went into mass publishing.

With his background, he was not only capable of translating according to philological aspects, but had the necessary “background knowledge.”

Later, English translations appeared with the collaboration of several translators, who also noted in the preface to their editions that they greatly appreciated Lazarus Goldschmidt’s translation (as in the Soncino Talmud). This masterpiece was later surpassed only by Rabbi Adin Steinsaltz (z”l).

The editions of the last tractates were already published abroad (in 1935). This “treasure” of Jewish knowledge was on some shelves after the Shoah and was reprinted by the German Suhrkamp-Verlag. For this purpose, an older edition was reproduced photomechanically. So, no digital editions were published, when the book market shifted towards digital editions. Therefore, interested laymen had to rely on libraries, or they purchased an expensive complete edition.

When Igor Itkin, a student at the Rabbinical Seminary in Berlin, joined, parts of the “Mishneh Torah” by Maimonides were added — “parts” means literally thousands of printed pages. The original translation was made by Leon Mandelstam, who made it or had to make it for the Tsarist government of Russia. Igor Itkin, procured editions that had been confiscated by the government right after publishing the volumes. Igor also translated passages himself, because passages fell victim to censorship. Since the edition was probably intended for schoolchildren — it is not clear whether it was ever actually used in a school — passages with references to sexuality or physicality are excluded. “Kings and Wars” was the volume that was banned in the first place. It is available online (now as well on Sefaria.org).

The Suhrkamp publishing house, of course, had no interest in making a digital version available before the copyright expired. So we then waited for the year 2021 — the year when Lazarus Goldschmidt’s translation would become public domain. Thanks to careful preparation, the first four tractates of the Talmud appeared in German on January 1, 2021. Fortunately, we were able to “convince” (the doors were wide open) the responsible persons of the Sefaria project so that we could reach our goal more quickly: The Talmud in German – easily available to all.

A team of dedicated people now structured, segmented and corrected texts within a very short time and thus a journey came to its “end” that had begun in 1997 or even 1897, the year the first volume of Goldschmidt’s translation was published.

The insights from this process are noteworthy for other parts of the Diaspora as well. The whole Sefaria project has become an important tool — not only for the English-speaking world, but for more countries in the Diaspora. Keep in mind that for some countries, print production of translations would not be worthwhile for commercial reasons. Digital available texts will allow tiny communities to curate and distribute source texts with a translation in their language. A publication for a single language that is no longer a world language, but is historically significant and a good example for other communities.

About the Author
Chajm is a writer, blogger, and resident of the German Ruhr district; publisher of the German Jewish website talmud.de. Some of his articles are published in a German-Jewish weekly.
Related Topics
Related Posts
Comments