A journey of one thousand issues begins with a single step.

On 16 January 1997, the first edition of London Jewish News hit the streets with the front page headline ‘Queen Pays Tribute To Special Sue’. It told the story of charity worker Sue Burns, who was invited to meet Her Majesty at Buckingham Palace.

I recall glancing over issue number one at my parents’ house on a Friday night. At the time, I was a journalist for publishers Emap Metro, writing for lads’ magazine FHM and a short-lived men’s health title. I considered it my dream job until I truly found it 12 years later – in the editor’s chair at the very same newspaper.

My first issue, number 579 in October 2009, was dominated by news of former BNP goon Nick Griffin’s appearance on BBC1’s Question Time. I hope the 421 editions I’ve since overseen reflect the pride I feel to have been given such a rewarding role.

Although affectionately still known by many as LJN, the newspaper dropped the ‘L’ back in 2004, to reflect the emphasis on national and world news across its pages. 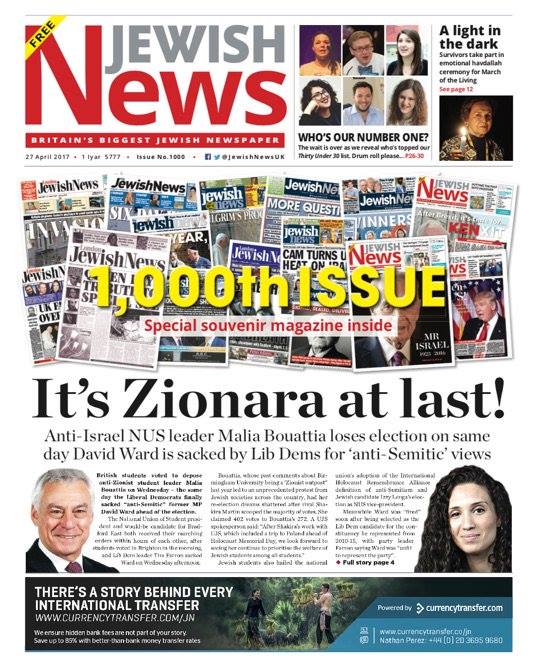 This week’s landmark issue of the Jewish News.

The newspaper has flourished in an era of free media content, riding the wave of success that’s seen the likes of Metro and the Evening Standard commercially and editorially thrive without the barrier of a cover price.

Jewish News is ABC audited as by far the largest distributed Jewish publication in the country with 25,000 copies (and rising fast) across London every week. Our website is read by more than 400,000 people every month (and rising even faster) thanks in part to an exclusive UK digital partnership with The Times of Israel, the world’s biggest Jewish portal. Look out in the coming months for a glossy online overhaul.

The impact of Jewish News has grown in the corridors of power, with David Cameron granting the newspaper his only Jewish interview as PM before the 2015 General Election campaign. The newspaper also secured the Archbishop of Canterbury’s only interview with the Jewish media. Stories in our pages are picked up by the national media, including in a recent piece by the Daily Mail which hailed us as Britain’s “most popular Jewish paper”. 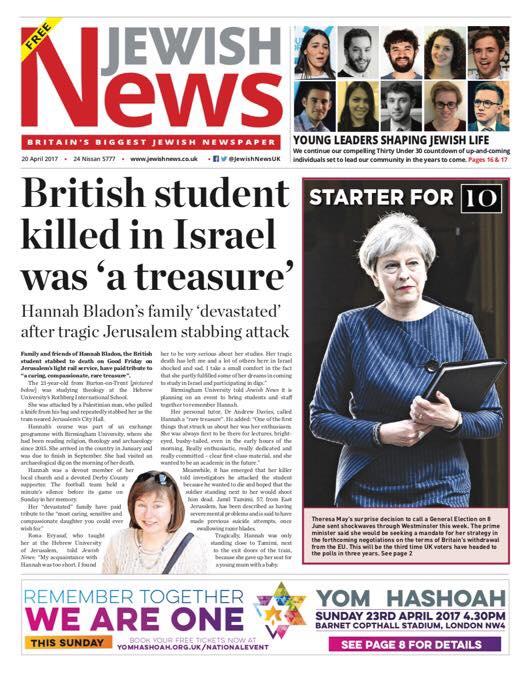 Last week’s front page of the newspaper, on the British victim of the Jerusalem terror attack and the looming UK General Election.

We’ve also hosted a range of political Q&A events with key public figures, including Jeremy Corbyn, Boris Johnson, Ed Miliband and Nick Clegg, and organised two UK-Israel conferences in Parliament with BICOM, bringing together leading politicians, embassy officials, think tank leaders and journalists from both countries to enhance bilateral dialogue. The appearance of Home Secretary Amber Rudd at the last such event in November 2016 was covered by Sky News.

But Jewish News remains at its heart a community newspaper – and loudly and proudly so. This means more than simply reporting the news. We have teamed up with all the leading communal groups to media partner on the biggest events in the Jewish calendar, organised wedding and barmitzvah exhibitions, twice taken over Wembley Stadium for the Jewish Living Expo and celebrated unsung heroes in our Community Hero Award and Jewish Schools Awards.

And few projects in the newspaper’s history have generated as much excitement as our Forty Under 40, Twenty-Five Under 25 and Eighteen Under 18 lists to identify those shaping the community’s future.

We are also a campaigning newspaper. Our petition for the Royal Mail to release a stamp honouring Holocaust hero Sir Nicholas Winton garnered 106,000 signatures worldwide and, within eight months, inspired the national release of stamps honouring outstanding Brits – including the great man who saved 669 Jewish children from the Holocaust.

Before signing off, thanks are due to colleagues and predecessors who have ensured the newspaper’s continued success.

Plus far too many talented freelancers to mention by name.

I’d also like to pay tribute to our board, comprised of the leading lights of Anglo-Jewry, for providing the expertise and inspiration to drive the business forward.

Finally, thanks to you. For reading the Jewish News in print and online. For attending our events. For writing and phoning, praising and moaning, cheering and groaning.

Thanks for making Jewish News part of your Jewish week for the last 1,000 weeks.