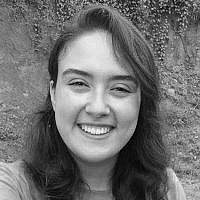 The Blogs
Paulina Garcia
Apply for a Blog
Please note that the posts on The Blogs are contributed by third parties. The opinions, facts and any media content in them are presented solely by the authors, and neither The Times of Israel nor its partners assume any responsibility for them. Please contact us in case of abuse. In case of abuse,
Report this post.

On September 7th, we, the 17th cohort of Project TEN, the Jewish Agency’s international development program that operates volunteer centers in developing areas around the world, arrived to the Project TEN Cadena Center in Oaxaca, Mexico. I was very excited and looking forward to beginning this life changing project. We spent the day getting to know our new family and roommates for the coming three months. We met the director, project coordinators, security personnel and we got our volunteer assignments for which project we would embark on during our time in Mexico.

Although nothing could have prepared us for our first night in Oaxaca.

On September 7th, minutes before midnight, an enormous 8.1 earthquake hit Oaxaca, southern Mexico. It was the strongest earthquake Mexico has known in decades, and the next day, we discovered the extent of the damage. In our community which is close to the town of Juchitan, the most damaged region in Mexico, the devastation was horrific. Most of the buildings in the town collapsed, leaving people homeless on the streets, hundreds of people were injured and dozens were killed.

The Director of our Center, Andres Ladriere, didn’t waste any time and offered us the opportunity to go on a rescue mission to Juchitan. We all agreed and went on our way, determined and motivated, knowing our help was desperately needed.

As we arrived, we met additional Cadena volunteers and began working together right away, unpacking food and assembling two hundred food packages on our first night alone. The easy part was behind us.

In the morning we loaded the packages onto the trucks and went to deliver them in town. There was a huge demand for anything we were able to offer; from food packages, to water bottles, blankets and baby supplies. The situation was desperate and it was incredibly tough to see the town destroyed, with people begging for basic supplies and necessary medical attention. The situation required us to be extra sensitive and mentally strong. We needed to focus on being efficient despite the disaster in front of our eyes.

As we continued with the mission, the further our motivation grew. There was no place we’d rather have been during this difficult time, helping the local communities of Juchitan and Oaxaca. The people of Juchitan were very grateful and appreciative for the assistance they received and it was satisfying for us to know our help was well received.

For a week we had the most amazing opportunity to be a part of a team, whose sole purpose was making other people’s life better after going through this enormous disaster. Overall we managed to assemble and deliver more than 900 food packages, including unloading an entire planeload of crates with food that had been sent to the people of Juchitan.

There are no words that can express how blessed I feel for being where I am, being a part of my group within Project TEN and for participating in the international effort to make the world a better place. I knew that joining the Jewish Peace Corps Service of Project TEN would change my life, but I didn’t know it would happen so soon. This experience showed me the true meaning of Margaret Mead’s words, “Never doubt that a small group of thoughtful, committed citizens can change the world; indeed, it’s the only thing that ever has.”

Paulina Garcia, a 21-year-old from Kfar Saba, is a volunteer with the Jewish Agency’s Project TEN program, an international development program that operates volunteer centers in developing areas around the world.

About the Author
Paulina Garcia, from Kfar Saba, is a volunteer with the Jewish Agency’s Project TEN, an international development program that operates volunteer centers in developing areas around the world.
Comments
Advertisement