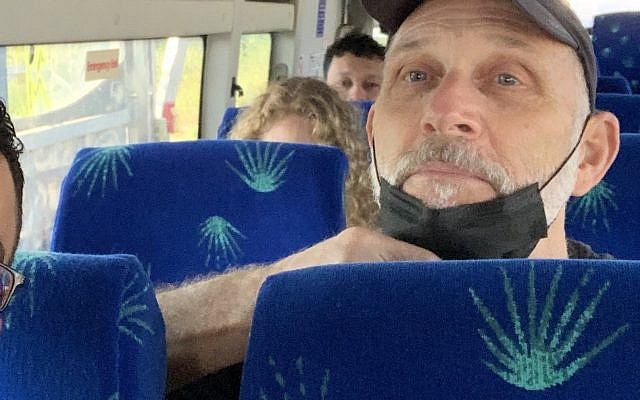 The featured photo for this post has been censored.  I cropped it for precaution’s sake.

The bespectacled fellow on my right who shared the frame with me in the original selfie — now just a sliver of him is visible — didn’t think it would be a good idea to show his face with mine. In the full picture, you can see him wearing a blue surgical mask that covers everything from his chin to his nose. I would be hard-pressed to identify the 31-year-old man from the photo, but I suppose people from his town might recognize him, mask and all.

The two of us met in Tel Aviv’s Central Station as we waited to board a bus headed south. We spoke in English, because his Hebrew was poor, and my Arabic was all but non-existent. I was headed to a Passover seder in Ashkelon. He was headed further south to Gaza City. He was the first person I had ever met who introduced himself as a Gazan.

Last October, Israel expanded its work permit quota from 7,000 to 10,000 Gazans as part of its ceasefire agreement with Hamas. In March, Israel’s Defense Minister Benny Gantz announced that Israel would increase the quota if Hamas continued to hold back its rockets. Who knows how long the ceasefire will last?  Who knows if I’ll meet other Gazans face to face in the meantime?

With images fresh in my mind from last May when Israel’s Iron Dome intercepted Hamas’s Qassam rockets over my Tel Aviv apartment, I was taken aback when the young man told me where he lived.

Hamas’s missiles might be quiet for now, but reports of an uptick in violence during the weeks leading up to, and continuing through, Ramadan have vied with the war in Ukraine for top stories of the day. Lethal knifings and shootings by Palestinians of Israeli Jews in the cities of Bnei Brak, Hadera, and Be’er Sheva, together with a deadly attack on a Tel Aviv bar a mile from my apartment, were fresher in my mind. 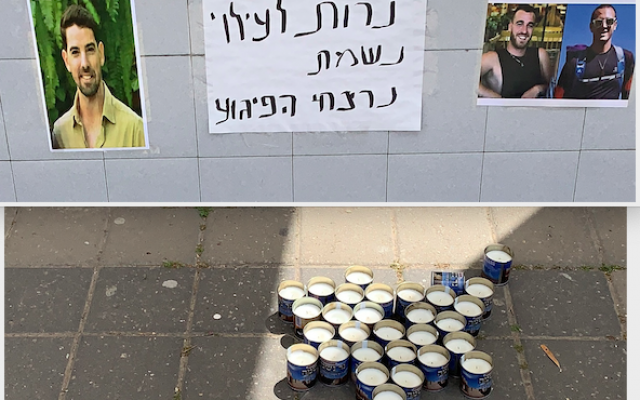 Most fresh were reports from Jerusalem of Muslims hurling rocks from the Temple Mount on Jews praying at the Western Wall below.

Given all that, surprisingly, the more he and I chatted, the more at ease I felt with the stranger from Gaza. In his studied English, he told me how much he liked Tel Aviv and admired its infrastructure. He said that he has been working in the city for the past month. When I asked him if he liked the job, he said matter-of-factly that it was not a good one, but it was better than no job. Before he began working in Tel Aviv, he said that he had never been outside Gaza.

We talked about his fasting during Ramadan and my eating unleavened bread for Passover. I joked about how I had managed to stay married to the same woman for 36 years –- even when she’s wrong, she’s right –- and he told me about his training as an engineer. He hopes to obtain a visa to the US to gain work experience in his field so he can return home and find a good job.

There are no fireworks to end this post.  An American-born Jewish Israeli enjoying a respectful, amicable encounter with a Muslim from Gaza seemed like something worth sharing for the holidays.

A modest sign of more peaceful days to come?  A new beginning on the horizon?  It can’t hurt to hope. As the saying goes, even oak trees start small.

About the Author
Filmmaker, playwright, and children's book author Marc Kornblatt is the producer/director of the award-winning documentaries DOSTOEVSKY BEHIND BARS, STILL 60, WHAT I DID IN FIFTH GRADE, and LIFE ON THE LEDGE, among others, and the web series MINUTE MAN, ROCK REGGA, THE NARROW BRIDGE PROJECT, and BLUE & RED, RESPECTFUL ENCOUNTERS OF THE POLITICAL KIND. He and his wife made Aliyah in 2019 and now live in Tel Aviv. The move inspired his web series OLEH HADASH.
Related Topics
Related Posts
Comments