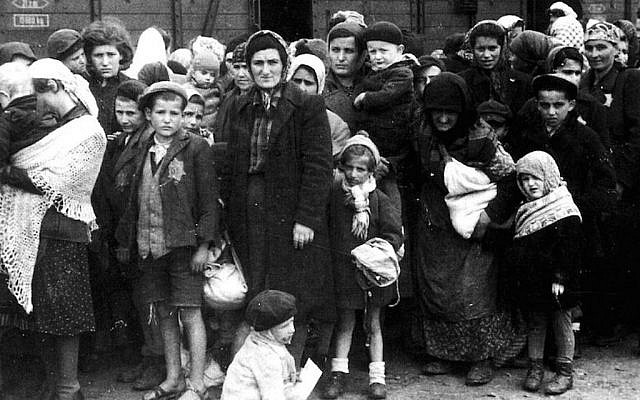 Illustrative: Jews from Hungary arriving at Auschwitz in May of 1944, part of 'The Auschwitz Album' series of photographs. Most of these Jews were murdered later that day. (public domain)

You have heard it before — those that fail to learn from history are doomed to repeat it. This quote is not a cliché reserved for history teachers and textbooks, it is a message that holds special meaning for all Americans, and particularly the Jewish community and those who fought valiantly against the Nazi menace in World War II.

And it is a message that is particularly resonant as we come to grips with the full magnitude of the US failure to adequately respond to the Holocaust, the systematic, transnational annihilation of the Jewish people across Europe and North Africa, as revealed like never before in a new documentary from Ken Burns, Lynn Novick and Sarah Botstein.

“The US and the Holocaust”, premiering on PBS this Sunday, is a monumental and vitally important new documentary that shines new light on the question of “Why didn’t the US government and political leaders do more to stop the catastrophe?”

Over three nights viewers will be presented with stories and brutal facts surrounding America’s failure leading up to and during the Holocaust. As Lynn Novick said, “This is not another film about the Holocaust. This is about America’s response, America’s obligations, responsibilities, failures.”

I will go a step further. This is not merely a documentary; this is a reckoning.

The parallels between what transpired in the 1930s leading up to the Holocaust and now are stark. The stories told within this work have never been timelier or more needed.

We are living in an era when antisemitic incidents and attacks have reached at historic levels, as violence is increasingly embraced by some on the extreme right, where social media runs rampant spreading divisive disinformation and falsehoods, and where dangerous demagogues hold the largest megaphones and command all our attention. For those of us who study history, it is all too painfully familiar.

This three-part series is not easy to watch. For Jewish viewers especially, many of us count Holocaust victims and survivors in our family trees. At first glance these painful events depicted ring so close to home. Indeed, it is nothing short of agonizing to hear firsthand how America, this country we love, the land that so many believed in and longed to emigrate to, blatantly failed when it was called upon to act. Eventually, the inferno of antisemitism came to incinerate European Jewry and murder two out of every three Jews on that continent.

Because of a largely isolationist response to what was considered a European conflict, the US imposed strict immigration quotas and laws specifically against Jewish refugees. These laws were accompanied by fierce lobbying from right-wing groups such as the Daughters of the American Revolution, and antisemitic and Nazi rhetoric parroted by American figures such as Father Charles Coughlin and famed aviator Charles Lindbergh. The latter would soon coin a dangerous nationalist slogan: “America First”.

America’s role leading up to the genocide of six and a half million Jews and millions of others is a topic that often is rigorously debated. Were officials inside President Roosevelt’s State Department antisemites? Why didn’t the US admit the St. Louis, a ship carrying 1,000 refugees that was ultimately sent back to Europe? Why didn’t the US Air Force bomb the concentration camps? Why was the American public largely dismissive of the crisis until it was too late? There are no easy answers to any of these questions, but nevertheless they must be asked and must be discussed.

But buried within this dark saga are some stories of light. There were bureaucrats, public officials, ambassadors, and organizations such as the American Jewish Joint Distribution Committee, among many others, that worked tirelessly to save lives. There were heroic figures such as Treasury lawyer John Pehle and Secretary Henry Morgenthau Jr., who helped establish the War Refugee Board, credited with saving tens of thousands of lives. These stories must be told as well to understand how heroes can emerge even in the worst of times.

Ken Burns reminds us that hate is not just about antisemitism. Jews are the canaries in the coal mine. While the Nazis initially focused on resolving the “Jewish Question” through a campaign of marginalization, persecution, and extermination, they soon widened their mandate to encompass other so-called undesirables, including political dissidents, Roma, LGBTQ people, and the mentally disabled.

“The US and the Holocaust” is so important for each one of us to watch. I viewed this body of work with many identities. As a Jew, as the grandson of a Holocaust survivor, as an American, as a father and husband, and yes — as the leader of the largest anti-hate organization in the world today.

At ADL we have spent the last few years sounding the alarm about rising antisemitism and surging hate in the US because we recognize that we have arrived at a consequential point of time. This is a kind of crossroads, a make-or-break moment for American democracy and all of us may soon be called upon to act. We have endured the shocks of Charlottesville, Pittsburgh, El Paso, Poway, Colleyville, Buffalo and the January 6th Insurrection.

No matter your political persuasion, Ken Burns’ powerful documentary calls on all of us to understand that these historical patterns easily could occur again. If we recognize the warning signs, we can avert a threat and push back against demonization and the demagogues who rile up passions in search of someone to blame.

Ken Burns and his team are arguably the greatest living documentarians of American history. With this new work, they have exposed the reality of a dark time, a story that needed to be told. It is our task now to learn from it so that we can honor the memories of those who perished. To me, there is no other mission as sacred or as important as that.

About the Author
Jonathan A. Greenblatt is CEO and National Director of the Anti-Defamation League.
Related Topics
Related Posts