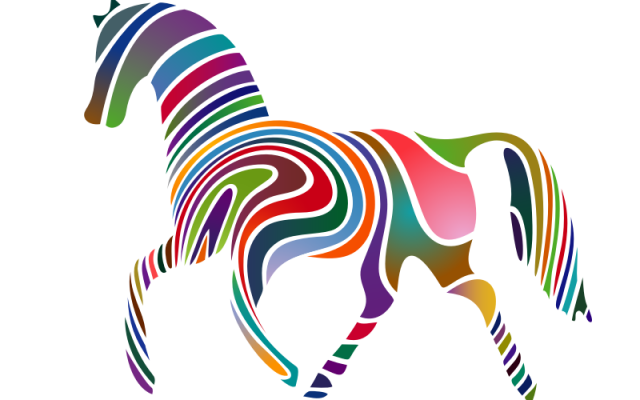 A Horse of a Different Colour (courtesy cleanpng.com)

I had to go to the supermarket today; we were nearly out of bread. But there was not a loaf in sight, the shelves were empty. Much the same were the shelves that had once held eggs, milk. Even the cans of baked beans were just a memory. I left with an empty bag.

I didn’t see them at first, the wind was howling through the streets, the tail end of a 100 kph storm that had wreaked havoc on my garden. But, slowly, the clip-clopping became louder and louder. Even then I did not pay much attention; I live near farmlands and a horse is not an unusual sight. But these hooves seemed to have an echo; there must be more than one horse. Then, with a terrible certainty, I realised that there were four horses heading my way, each of a different colour and each ridden furiously by its horseman. Yes, they were none other than the Four Horsemen of the Apocalypse. Of course, the Four Horsemen are mentioned in the New Testament, the Book of Revelation, and should have nothing to do with us Jews, but today they were here, in Rehovot.

The four riders on their White, Red, Black, and Pale horses, are often seen as symbolising War, Pestilence, Famine and Death. As they came galloping towards me, I saw that their riders were holding banners streaming in the wind.

The banner held by the rider on the White horse showed a map of the Gaza Strip. War is Coming was emblazoned across the Strip. I looked carefully but there was no indication of when the war would arrive. Judging by the reports from the border in my newspaper, we will not have to wait long.

The banner held by the rider on the Red horse did not need any date for his prediction of Pestilence; the coronavirus is already with us. We have not seen a worse pestilence for many a year. More worrying was that the horseman was wearing a face-mask; he obviously knew what he had brought us and was trying to self-isolate.

I did not bother to look at banner held by the rider on the Black horse. I did not need anybody to tell me about Famine; I had just come from an empty supermarket.

The rider on the Pale horse was not up to date with the figures for coronavirus Deaths. His banner showed just 10 deaths. But I could not blame him; even I, with the internet at my fingertip, cannot keep up with the figures.

Apocalypse is a Greek word meaning “revelation” – an unveiling of things not previously known. It is usually associated with an event resulting in great destruction and violent change, but in the worst case it means total destruction and the end of the world. With no way of knowing how long the coronavirus is going to be with us, nor how many people will die, could we be looking at the apocalypse? We have seen many unpleasant viral outbreaks in the past, but this is a horse of a different colour. Is this the end of the world?