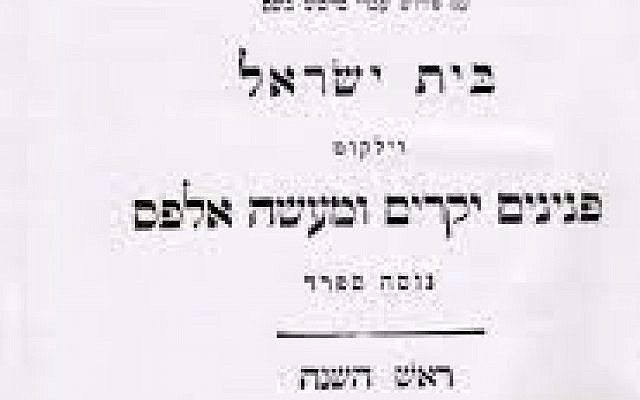 This year’s High Holiday services felt strange. Though, unlike last year, COVID regulations allowed public gatherings, things did not return to normal. To protect those around me, I attended minyanim under a tent outdoors. As the congregation I attended did not offer this choice, I went to the neighborhood Modern Orthodox, YU-oriented synagogue. On top of that, the tent minyan conducted truncated services.  All of this seemed disorienting.

However, a musaf prayer pulled me up short.  The baal tefilah chanted a melody I had heard in my youth at my shtibel, Beis Hachasidim de Polen (followers of the Rebbes of Gur) on the Lower East Side, from the baal tefilah, a house painter who had immigrated from Warsaw after World War I. I had not heard the tune  in about 50 years.  Sitting under the tent on Yom Kippur, thinking about the prayer, the melody and the baal tefilah made me realize that, despite the turmoil, God’s mercy will prevail once more.

The prayer, Ain Kitzvah, constitutes the apex of musaf.  Recited after Netaneh Tokef (R.Amnon’s searing tribute in the agony of his martyrdom during the Spanish Inquisition), the proclamation “Repentance, Prayer and Charity will Annul the Evil Decree, a piyut acknowledging man’s fleeting existence in contrast to God’s eternity, the text announces (as the Kol Bo Machzor translates in Yiddish):

According to another congregant in the shtibel, who like the baal tefilah, had lived in Warsaw (the center of the Rebbe of Gur’s court) at the time, the two of them had heard the melody, a march,  from the Imperial German Army band during the occupation in 1915.  I took it as a quirk from the older generation. Such crossover happened regularly. Another baal tefilah chanted in his High Holiday prayers The March of the Double Eagle (a Polish composition) he had heard growing up in Krakow. (Indeed, the Boston Pops played it on PBS one year between Rosh Hashanah and Yom Kippur.) Red Buttons, the comedian, transferred a melody he heard as a boy in his shtibel to a popular song he recorded.

Sitting under the tent this year gave me a different perspective.  Though not necessarily the house painter’s intention, the melody symbolized renewal for me.  I read in a new book by Robert Zelikow, The Road Less Traveled (PublicAffairs, 2021), of the hunger and privation in German-held territory during World War I.  Using the melody which evoked great suffering as a paean to God and his benevolence became a profound affirmation, especially during COVID.

Next, I reflected on the baal tefilah himself. Pre-World War II immigrants to the US became house painters or peddlers, self-employment occupations, with unsteady incomes,  to avoid having to work on Shabbat. Even in the city government of the 1920s, the adage “If you don’t come in Saturday don’t come in Monday” ruled the workplace.  House painters and peddlers lived the courage of their faith.  I realized, too, that  this story ended well.  The house painter’s grandsons, whom I knew from yeshiva, entered the middle class. One even became headmaster of the prestigious Maimonides School in Boston.

On to Sukkot, the Season of our Joy.  G’mar Tov.