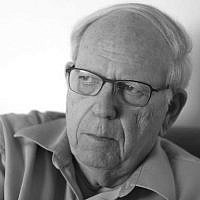 The Blogs
Efraim Halevy
Apply for a Blog
Advertisement
Please note that the posts on The Blogs are contributed by third parties. The opinions, facts and any media content in them are presented solely by the authors, and neither The Times of Israel nor its partners assume any responsibility for them. Please contact us in case of abuse. In case of abuse,
Report this post.

The murder of four Israeli citizens in the heart of Beersheba on Tuesday was perpetrated by Mohammad Abu al-Qi’an, an Israeli citizen who had served a four-year jail sentence after returning from Syria where he had joined the extreme ISIS terrorist movement. The judge who sentenced him had awarded him a comparatively light term in jail because he had been impressed by Abu Al-Qi’an’s expression of deep remorse.

After his jail sentence, he joined the teaching team of an elementary school in Hura, where he was respected as an individual and as a teacher. His tribe – the Abu Al-Qi’an tribe — issued a very strong statement condemning the dastardly act as did the entire gamut of the Arab minority political parties, both the one participating in the current coalition government of Prime Minister Naftali Bennett and the other serving in the parliamentary opposition in Israel.

The government is now faced with crafting a policy for the Muslim holy month of Ramadan, which is set to begin on April second, just nine days away. Less than a year has passed since the last confrontational period of the previous Ramadan that climaxed with the unforgettable appearance of a missile flying over the Temple Mount in Jerusalem. Until this week’s event in Beersheba, preparations were underway to relax many restrictions applied against violent protests by Palestinians.

Israel will no doubt be monitoring the developing situation in the crucial coming days vis a vis Hamas in Gaza and the West Bank. Concurrently, greater attention will be given to the security situation in “mixed” Israeli cities like Ramle, Lod, Acre and Jaffa, where widespread arson and physical violence last May caused both Jewish and Arab fatalities. All these requirements add up to a very tall order both at cabinet and field levels and will impose a heavy burden on the many thousands of security personnel nationwide as they work to contain violent outbreaks throughout the country and especially in Jerusalem.

Prime Minister Bennett has just returned from a meeting in Egypt with President Abdel-Fattah el-Sissi and Sheikh Mohammed Bin Zayed (MBZ), the virtual ruler of the United Arab Emirates. Just a few days prior to this meeting, the Emirates leader had hosted Syrian President Bashar Al Assad and MBZ presumably raised this event at the tripartite meeting. Might this herald the beginning of a move to normalize relations between Syria and Israel? Speculation might be rife but even if this presumes far too much, these developments could add a positive whiff to the overall atmosphere in the Middle East.

There is, of course, another aspect to the Assad role in the Middle East. In mid-February 2022 on the eve of the Russian campaign against Ukraine, the Russian Minister of Defense, General Sergey Shoigu visited Syria, met with President Assad and inspected a Russian military exercise, the largest Russia has held in the eastern Mediterranean since the end of the Cold War. Operating from two airbases in Khmeimim and Tartous, the Russians augmented their permanent presence with MiG31 aircraft armed inter alia with hypersonic missiles of the type now being employed in the Ukrainian front, as well as Tupolev TU22M bombers. Russia is now signaling its strategic intention to gradually enlarge its permanent capabilities in the Middle East as a functioning international world power. This event, revealed inter alia at the time by Ksenia Svetlova in Tablet, received relatively small notice at the time.

The Assad visit is, without doubt, a move that requires serious attention given the close relationship between Syria and Iran. The continued presence of Iranian servicemen in Syria and Israel’s periodic activities vis a vis Iranian targets on Syrian soil have a semi-permanent character about them but this tandem might not last forever. As we approach Ramadan and the first anniversary of the Abraham Accords we might do well to study how they might contribute positively to stability and peace in the region.

When first revealed, the accords were “sold” to the Israeli public as a unique and original prize obtained in exchange for nothing. “Peace in exchange for peace” was the slogan – a very first in the global history of diplomacy between nations. As time wore on, leaks produced “items” not mentioned before.

First was Israel’s acquiescence to the sale of F35 aircraft by the United States to the Emirates. It transpired that Israeli decision was not made after the Defense establishment had been consulted in an orderly fashion. On the face of it, this deal somehow led the way to damaging Israel’s qualitative edge in the Middle East.

Second, the agreement was not a peace agreement because Israel had never been at war with the Emirates. Indeed a wide range of relations had been nurtured between Israel and many of the gulf states for many years prior to the accords.

The third aspect of the accord became known when the Palestinian issue was labeled a secret one and the future of Judea and Samaria was handled in a secret annex, the details of which would be withheld for a secret period of time. This formula is still a state secret in Israel.

The reason for this has never been explained to the citizens of Israel or revealed to the Palestinians. There is reason to believe that the secret undisclosed annex contains elements of a possible “two-state solution” in one construction or other. The exact duration of the embargo on disclosing this annex has never been revealed either. Its concealment is probably aimed to serve the prevention of an outbreak of internal conflict in Israel.

While the argument for concealing this annex is obvious, there may be a case for doing the opposite at this particular juncture. Maybe a revelation could preclude a repeat military performance by Hamas and others and allow the powers that be on both sides to provide an alternative to the endless cycles of deadly campaigns. If, in the end, we must learn to live side by side with each other what do we stand to gain from prolonging timeless agony only to serve transient interests of political parties and figures?

About the Author
Efraim Halevy was the 9th Head of the Mossad and is chairman of the Triguboff Institute.
Comments