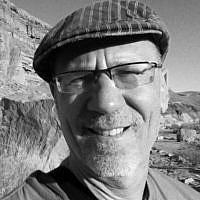 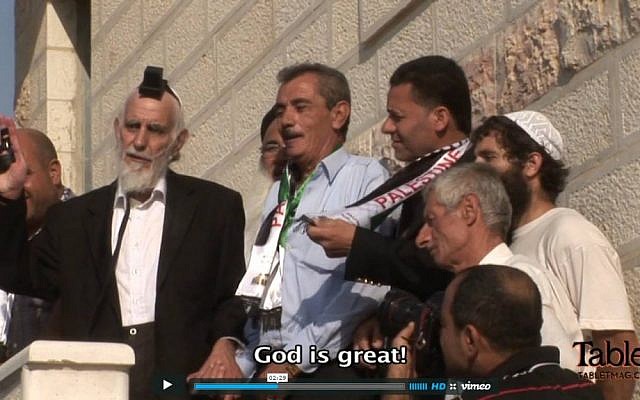 I videoed Rabbi Menachem Froman over about a 4-year period. I first interviewed him, in his home in Tekoa, a month before Obama’s first inauguration in 2009. Froman was scheming (as usual), trying to pull the strings in all the worlds, to coax some peace to our region. He asked me several times if I could get my video in front of Obama’s eyes, and I promised, I’d do the best I could.

With hope and dreams and longing as a big part of his life (Froman would probably say this has to do with the moshiach), he told me that Obama’s being elected – bringing together opposites (black/white, Muslim/Christian) in his person – was a miracle.

Humor was an essential part of Froman’s lexicon. When I asked him for details of his longterm friendship with Yasser Arafat, he immediately answered, with a big laugh, “If you count dreams, I am STILL a friend of Arafat!”

As one of Froman’s longtime collaborators Eliyahu McLean said to me at Froman’s shiva, Froman possessed an abundance of “ezut d’kidusha” (usually translated as “holy chutzpah,” a term originated by one of Froman’s mentors, Rebbe Nachman of Bratslov). McLean told me that “in the sea of cynicism, despair and skepticism” here in Israel/Palestine, it took that chutzpah for Froman to do his work.

McLean was in the group of about 15 of us that accompanied Froman to Qusra that day after the mosque vandalism there. That day (in September, 2011) will live in my mind forever. We stopped briefly at the entrance to the village. The Israeli army escort left us there, as we arranged with village leaders to come into the town without the soldiers. I’m still wondering if the one villager wearing a Saddam t-shirt put it on just for our benefit.

Nachum Pachenik, one of Froman’s protégés (and the founder of the West Bank movement Eretz Shalom) later told me that the army had 30 jeeps stationed in the hills around Qusra, in case things went awry.

As Froman stood on the steps of the mosque, he made instant connection with the crowd of villagers, by shouting three times the traditional Moslem call to worship (each time louder than the last), “Allahu Akbar!”

I was filled with that peculiar mixture of fear and excitement for the two hours we were there in Qusra. But besides one villager yelling at a crowd of people listening to Nahum talk next to the mosque, I didn’t see any anger expressed.

Since Froman has died, many of us are hoping that his ideas will live on, as strong as ever. I’ve been following several of his protégés, including Nahum Pachenik and Ziad Sabatin, a West Bank Palestinian, for a documentary I’m working on, “A Third Way – Settlers and Palestinians as Neighbors”. One day last week, both Nahum and Ziad (and several other Palestinians) came to pay respects at Froman’s shiva. The Palestinians had to wait for 15 minutes at the guard’s gate to Tekoa, as it was made 100% certain that they were kosher….

At the shiva, Ziad took out several boxes of medjool dates, and in his simple, direct way, connected with the Jews there by patiently going around to almost everyone – about 150 people – offering dates. To me, Ziad is clearly Froman’s disciple, in the Jewish-Moslem chevra that Froman pioneered. Ziad told me another time, “The best way to kill the fear, is meeting.” This is definitely different than the endless refrains of “divorce” that so many Israeli politicians use to describe the solution when talking about Palestinians.

Froman mentioned that memorable phrase one last time towards the end of the interview in 2009: “There are difficulties, but as my Arab neighbors say, ‘Allahu Akbar’ – ‘God will overcome’. Or in English, you say it, ‘Yes we can.’ ” And then one more very big grin.

About the Author
Harvey Stein is a filmmaker and video journalist, originally from New York City, now living most of the year in Jerusalem. He is now re-launching his feature documentary , "A Third Way - Israelis and Palestinians as Neighbors", about the unique Rabbi Menachem Froman and his protégés, both Israelis and Palestinians. He is also almost finished with his new impact feature documentary, "Green Rebel", about the Israeli-American solar energy visionary, Yossi Abramowitz, who is bringing commercial solar fields to African nations . Harvey believes that digital media can be a crucial force for positive change in these tough times. You're welcome to follow his work and contact him for any reason.
Comments