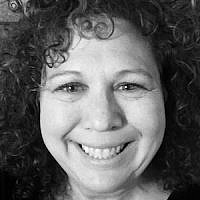 The Blogs
Yael Tzivia
Apply for a Blog
Please note that the posts on The Blogs are contributed by third parties. The opinions, facts and any media content in them are presented solely by the authors, and neither The Times of Israel nor its partners assume any responsibility for them. Please contact us in case of abuse. In case of abuse,
Report this post.

I am a Jew who stands with the Standing Rock Sioux Tribe and against the Dakota Access Pipeline. I spent Sukkot in Cannon Ball, North Dakota with my pop-up sukkah chanting Hallel on the windy plains, witnessing a continuing American tragedy.

I am a Jew who married and bore children to an Indian lawyer who was a Supreme Court Justice of the Citizen Potawatomi Nation (and is a shomer Shabbat ger — Sabbath-observant convert).

Police helicopters and airplanes circle constantly above, scrambling cell phone signals and photographing every move of the Peoples below.

I am a member of a synagogue where the men and women sit separately and also a member of a Native women’s sweat lodge where we separate ourselves for rituals.

Men, deep in prayer, ripped from their ceremonial space and arrested — their inipi and ritual items destroyed. Old women pepper sprayed. Young men falling to the ground, shot by beanbags and rubber bullets, their horses stumbling beneath them.

I remember the Yom Kippur War. My parents pulled us out of school to raise funds for ambulances and hospitals. At 11-years-old I was cold-calling strangers, begging for money to save our People.

Deafening sound canons. No running water. The camps are in short supply of medicine and warm clothes, but overstocked on rumors and fear.

I have “zero degree of Indian blood.” My children and their father are enrolled citizens of their Tribe. Their percentage of Indian blood is marked on their ID cards. Yes, that is how the United States government tracks Indians, by their blood quantum and tribal enrollment — reminiscent of yellow stars.

The “Camps” at Cannon Ball — named Red Warrior, Oceti Sakowin and Sacred Stone instead of Auschwitz, Treblinka, and Dachau.

My paternal grandparents survived the Kishinev pogrom of 1903, started by a blood libel that Jews murdered a young Christian boy to drain his blood to make matzah.

Local ranchers band together against the Indians after a cow was left to die in the field, shot by bows and arrows, and the Native people are falsely accused.

I never realized until I was in my 40s that most American families do not have a pre-selected safe place and contingency plan for when the newest iteration of Nazis comes for them. Surprisingly, most Native people in the United States I know also have a contingency survival plan.

The camps — surrounded by arson lit fire in the middle of the night. Fire crews refusing to respond.

Instead of fairy tales for bedtime stories, my grandmother spoke of children kidnapped, villages burned, men slayed, women violated, and mass graves. My great uncle would drink water glasses filled with vodka and then show us kids where his finger was shot off.

A baby is born. Winter is coming. The volunteer medics are being trained on amputation of frost bitten limbs.

Strong memories are resurfacing of “Come now children! Quickly! Mr. ______ is going to show you his number tattooed on his arm and tell you how they tried to hang him, but he escaped!”

I am a lawyer and find myself in a lawless place. My calls for immediate help to United States Department of Justice, the FBI, and the Bureau of Indian Affairs – my erstwhile colleagues – go unanswered.

The National Guard is called out. State law enforcement is acting in cahoots with oil pipeline private security mercenaries, operating outside of the law.

The Fort Laramie Treaty of 1851 guarantees the Lakota people these lands in perpetuity. But, history and “the law” are written by the hands of the conquerors.

The law? What law? Local law enforcement protects big oil. Federal Justice officials are nowhere to be found. Native “water protectors” are denied the most basic of human and civil rights.

Cannon Ball, North Dakota is a place of holiness and of terror. People sing and cry out to Creator from the deepest recesses of their souls and are answered by the thump of police riot batons.

In the darkest hours of the “battle,” a herd of triumphant buffalo surges forward towards the pipeline. An enchanted eagle perches in camp, so calm that the People can touch and speak to it.

The People are armed only with their prayers while their opponents sport the most advanced weaponry and surveillance equipment.

Creator has called them from the Four Corners of the Earth to protect their holy land, given to the Lakota people for all eternity. This is a war of prayers against high tech weaponry. This is a battle against gashmiut, the idolatry of money. This is the straw that broke the camel’s back after five hundred years of genocide. The people have declared that this is their last stand.

In 1877 the great Lakota warrior, Crazy Horse, prophesied (four days before his murder):

I see a time of Seven Generations when all the colors of mankind will gather under the Sacred Tree of Life and the whole earth will become one circle again.

As a Jew, does any of this sound familiar?

About the Author
Yael Tzivia is an attorney in Tucson, Arizona specializing in Federal Indian law. She proudly proclaims her status as a Jewess and as family to the Citizen Potawatomi Nation.
Related Topics
Related Posts
Comments