June 4, 2021 –  Canadian David Hofstedter is the Founder of Dirshu, the largest Torah organization in the world. He recently met with Members of the US House of Representatives in Washington, DC to discuss issues of mutual concern.

Dirshu, is an Orthodox Jewish International organization founded in 1997 in Toronto, Canada by Rabbi David Hofstedter, the son of Holocaust survivors.  It includes nearly 200,000 supporters who are dedicated to the study of Jewish texts, sponsors Torah lectures and offers financial incentives to individuals and groups to learn and master Talmud, Halakha and Mussar texts.  Dirshu functions in 26 countries on five continents. Its US headquarters is in New Jersey.

Members of Congress attending this briefing were asked: “to be more clear and forceful in their condemnation of antisemitic acts especially in light of the continued uptick in hate crimes against Jews”.  Congressional districts represented included Florida, Iowa, Nebraska, New Jersey, New York, Texas and Virginia.

In his address, Rabbi Hofstedter said, “We have always been able to rely on the support of the United States and the benevolence of its government to protect Jewish people when we have been the subject of persecution and under attack.” 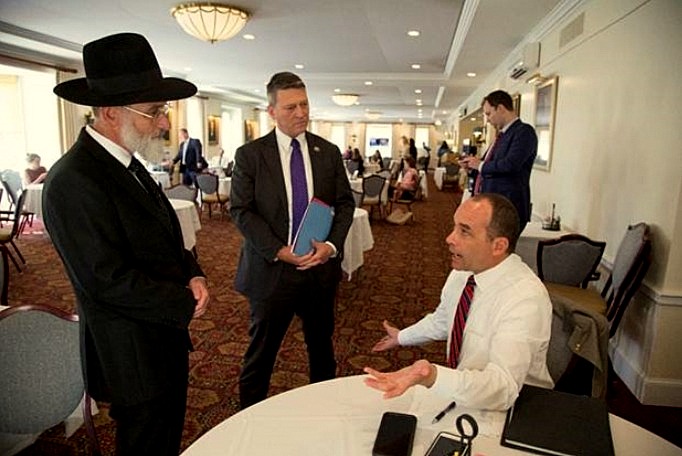 Former Arkansas Governor Mike Huckabee confirmed that “We need to stand in solidarity with our Jewish brothers and sisters now more than ever.  Thank you  Rabbi Hofstedter and Dirshu for taking your mission to Washington.”

Said Jeff Van Drew, New Jersey 2nd District Congressman, “We salute Dirshu’s leadership as they continue to fight the darkness and moral confusion emanating in the world, with light.  The spike in hate crimes against Jewish people across America and the globe is an issue that must be expeditiously dealt with.  We in the United States Congress will continue to stand up for the Jewish people and the State of Israel.

Iowa’s 4th District Congressman Rob Feeney added, “I deeply appreciate the importance of preserving the freedom of religion – one of the most important and fundamental rights we are blessed to enjoy in this country.  My faith is very important to me and it is the reason I serve the people of Iowa.  I will continue to defend our religious liberties in Congress.”

New York Congresswoman Nicole Malliotaki whose District 11 includes Staten Island and Brooklyn with large Jewish communities said, “Rabbi Hofstedter and I have engaged in a thorough dialogue about the importance of preserving freedom of religion.  I commend him for the work he has done to restore Jewish scholarship levels with Dirshu and will continue to advocate for individuals’ sacred right to freely exercise their faith without fear of persecution.”

In an in-person address to the Members, Rabbi Hofstedter said, “As Members of Congress, your attendance and participation at this briefing demonstrates your own personal commitment to supporting Jewish values and to promoting unity.  I feel a deep sense of encouragement about what lies ahead in the future and I intend on conveying your messages of encouragement to all members of our organization in your respective districts back home. We at Dirshu look forward to working together in the months and years to come, to ensure that freedom of religion is never abridged; and that never again in fact remains just that – Never Again”.

To quote Elie Wiesel, the Nobel laureate: “Silence encourages the tormentor, never the tormented.” As diaspora Jews living in Canada, our alarming silence and our indifference to find leaders who can speak out to the non-Jewish community on our behalf, in a language clearly understood, are far and few between. Rabbi David Hofstedter exceeds the call of duty required during these exceptional times. He is a leader par excellence.