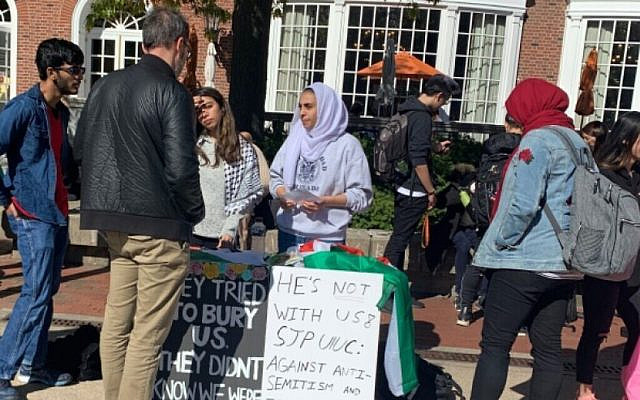 Illustrative: Students for Justice in Palestine hold an 'emergency teach-in' at the University of Illinois Urbana-Champaign in 2019 after the school chancellor condemned an anti-Semitic presentation that included anti-Zionist material. (Courtesy AMCHA)

As I stepped into my Jerusalem home last Thursday night, I was overcome by some all-too familiar feelings. For the fourth time in just two weeks, fear, heartbreak, anger, and disappointment struck our entire Jewish nation as the news broke of the most recent terror attack in the heart of the country. While such incidents have to a large extent, unfortunately, become normalized in the eyes of the public, this occurrence felt different. This attack targeted Tel Aviv.

Tel Aviv, with its vibrant nightlife, young atmosphere, beautiful beaches and trendy cafes, is the newly ranked “most expensive city in the world”, the hi-tech hub, and the LGBTQ capital of the Middle East. It’s the city where young professionals unwind at their favorite bars after work, where Birthright participants spend their free evenings at popular night clubs, and where markets are bustling with people of all demographics.

To many, Tel Aviv is a beacon of light, the epitome of life, freedom, and safety. But now, its safety has been compromised, and as I watched the chaos unfold on Thursday night, I couldn’t help but think that I want to feel safe again. More importantly, I want everyone to feel safe again.

As we have witnessed in the past, when there is conflict in Israel, the worldwide Jewish community is put at a greater risk. In recent years, the Diaspora has witnessed an exponential rise in Antisemitism. In 2021, the Anti-Defamation League recorded the highest number of Antisemitic incidents since 1979. Especially on college campuses, Antisemitism and anti-Israel sentiment have been running rampant. Just since March of this year, nearly one hundred “Israel Apartheid Week” events were held on university campuses throughout North America. BDS resolutions are routinely introduced at student government meetings, and known Antisemitic public figures are unapologetically invited to speak at the most prestigious schools. According to National Public Radio, one in every four American Jews reported they had experienced Antisemitism in the last year. Rarely a week goes by without a headline of a vandalized Jewish institution or an assaulted Jewish man, woman, or child.

These violent incidents are terrifying, but to some, Jews are facing an even scarier threat. Young people, specifically, are encountering a new form of Antisemitism by way of social media.

The impact of social media on our everyday lives cannot be overstated. Apps such as Instagram, Twitter, and Facebook are often the sole methods by which young people receive and disseminate information. During the May 2021 conflict between Israel and Gaza, propaganda and misinformation flooded users’ feeds, resulting in a mass anti-Israel campaign and inflaming the conflict in the digital realm. “Apartheid,” “oppression”, and “settlers,” were just a few of the dangerous vernacular that circulated amidst a mass of baseless infographics and imagery. “Hitler was right” became a trending hashtag on Twitter, being posted over 17,000 times, according to the ADL.

To make matters worse, celebrities and influencers use their platforms, which are often followed by more people than there are total Jews in the world, to share misinformation and inflammatory rhetoric, thereby inciting against the Jewish people. The widespread transmission of misinformation, which these social media platforms enable, poses one of the greatest threats to our community.

The Jewish people are no strangers to persecution, violence, and threats of extermination, whether in the physical or now in the digital world. In every generation, as it is often stated, there are those who rise up to destroy us. Will this ever change? Probably not, at least not in my lifetime. Yet, despite my real sense of insecurity, despite the recent attacks, at my core I feel there is no safer place in the world for a Jew to be than in Israel. Israel is the only country in the world that will protect Jews wherever they may be, as those from Yemen, Ethiopia, and now Ukraine can attest. While Antisemitic incidents will undoubtedly continue to rise in the Diaspora and online, Israel will never cease to welcome Jews with open arms, as it has on so many occasions in the past.

Even though the attacks on our community over the last few weeks are terrifying, and our personal and national safety is challenged, let us remind ourselves of the great strength and resilience that this country, and its people, have demonstrated time and time again. Moreover, compared to other places around the world where Jews are under attack, even in the United States, Israel is a much safer place. Diaspora Jews should not be afraid to visit this special country; it is, after all, their country as well. Birthright participants should continue spending their free evenings at popular night clubs, and young professionals must not fear grabbing drinks at their favorite bars after work. Never have we allowed threats, foreign or domestic, to destroy our spirit, and we cannot allow ourselves now to despair. As we have always done, we will survive this crisis.