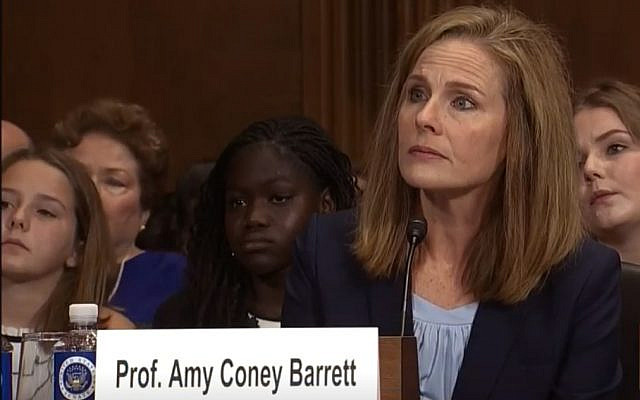 Thursday, the Senate Judiciary Committee will advance the all-but-certain confirmation of Amy Coney Barrett to fill Justice Ruth Bader Ginsburg’s seat on the US Supreme Court. The hearings focused on Barrett’s possible decisive fifth vote to overturn the Affordable Care Act, in the face of her previously expressed opinion on its invalidity. Senators also grilled the nominee on curtailing women’s rights, in the face of an ad she signed denouncing Roe v. Wade. Just as important, the new justice will help remove constitutional protections against government intrusion in religion.

In her testimony, Barrett said she would not impose her faith on others. Nice words. Even if true, Barrett can hide behind seemingly neutral legal doctrines of “originalism” to make the US a more Christian country.

The two religion clauses in the First Amendment stand as bookends. The Establishment Clause states, “Congress shall make no law respecting an establishment of religion.” It restrains the government from doing anything positive to advance observance. The Free Exercise clause adds “or prohibiting the free exercise thereof.” It commands that the government refrain from acting negatively against a person’s religious rights.

Opposing a proposed tax on Virginians to pay clergy’s salaries, James Madison and Thomas Jefferson argued that a person’s religion, if any, should remain a matter of conscience. Government should stay out. Jefferson described a “wall of separation” between religion and state. Madison wrote the First Amendment and Jefferson wrote the 1786 Virginia Statute for Religious Freedom, the model for the religion clauses.

Conservatives have chipped away at both. The Court interpreted the Free Exercise Clause to require states offering tuition grants for use in private schools to include religious academies. However, up to now, the Court kept limits. In line with precedent, states may deny scholarships for divinity programs. A Justice Barrett may push the Court over the line. States may have to pay for theologians’ training. Jewish taxpayers would support future Christian ministers and clerics of other friendly or not-so-friendly religions.

The Court nowadays reads Free Exercise in terms of “discrimination.” Accordingly, a state that excluded all private schools from aid would not have to support religious ones. In fact, the current interpretation of the Establishment Clause does not allow states to do so. Nor may the government mount sectarian displays on government property. By a 5-4 vote, the Court held that a plaque of the Ten Commandments (the Christian version) in a courthouse violated the Constitution. Were Barrett to adopt the views of Justice Scalia, her model, the government could get away with paying clergy’s salaries, the very outrage that led to freedom of conscience in the US, and more. If she adopted a narrower interpretation in vogue among conservatives, the Establishment Clause would lose all practical meaning.

The Court abandoned Lemon, though never overruled it. A majority introduced the idea that tradition governs. Sectarian prayers before legislative sessions could proceed and a cross could remain on government property along a major highway in Bladensburg, Maryland. Chaplains have long opened legislative sessions and the cross stood unchallenged for over 90 years.

Tradition does not allow for new forms of intrusion. However, Justices Scalia’s supposedly originalist dissent in the courthouse Commandments case argued that the Establishment Clause prohibits discrimination among religions, but allows help to all religions, as against non-believers. Scalia would allow payment for elementary and secondary religious education only, salaries for all clergy of all religions and subsidies for seminaries. The government may post the Sermon on the Mount as well as the Ten Commandments in courtrooms and enforce compulsory chapel in public colleges.

Justice Thomas espoused a new doctrine in the Bladensburg case. The Establishment Clause protects against compulsion. Since drivers had no choice but to look at the cross, Thomas did not mean it literally. Rather, he meant compulsory attendance at religious services. Nobody would enact such a law anymore. Thomas’s Establishment Clause has no bite. Barrett may well read English history and agree with Thomas.

With two justices in the Bladensburg case making it impossible to sue and Thomas’s pinched interpretation, Barrett would add a fourth vote. Expecting Justice Alito, an archconservative, to draw the line at traditional intrusions into religion seems a pipedream indeed.