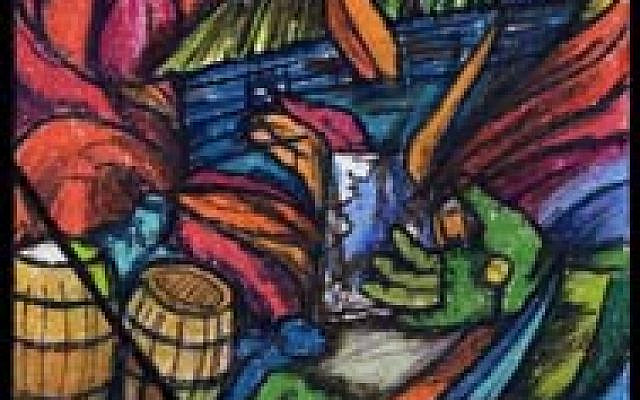 The event I wish to tell you about today my friends took place in the city of Tetiev in the Ukraine. Once as I was returning home from school, I was thinking about an upcoming vacation. My heart was gladdened by the warm thoughts. I was still lost in my daydreams when a hand grabbed me. I became very frightened. I lifted my eyes and my mother and father were standing before me trembling. My father grabbed one of my hands and my mother other and we began to run. A terrible fear fell upon me. My teeth, my hands, and my knees shook, but despite this I girded myself with all of my strength and ran with my parents.

As we ran, I saw many Christians, all with weapons in their hands; rifles, guns, and long knives. These terrible people fell upon every Jew and killed them. We saw them. We saw how they slaughtered and destroyed people’s homes. It was a miracle that they didn’t notice us and we fled. Suddenly my father stood and said to me with fear: Flee my son, run as quick as you can, don’t stop. With the remainder of my strength I ran until I arrived at a home. There I saw a large barrel. I quickly jumped inside and placed the cover over my head. I sat in that barrel and quietly cried, “My father and mother have left me”

Through my tears, I heard the sound of gunshots and screams. All of my body shook with fear. I made every effort not to cry so that the killers would not hear my voice. From a distance, I heard the terrible sound of screaming children. I listened, trembled, and cried in silence. My heart cried, but my voice was silent. The barrel is what saved me. (Yakov Orland, Israeli Playwright and Poet)

Yakov Orland was five years old at the time of the Tetiev pogrom in 1920. His family had lived in the city for generations, and his grandfather had been a noted Torah scholar in the community. He wrote these words at the age of ten after moving to Israel with his family to escape the violent anti-Semitism of Eastern Europe.

The Tetiev pogrom was both unique and all too familiar. It occurred in the aftermath of the Russian Revolution during a time of great instability and economic crisis. As has so often been the case in such times, anger, frustration, and aggression were unleashed against the Jews. It led to what has become known as the Kiev Pogroms, a time of rioting and rampage chiefly directed against the shops, factories, homes, and persons of Jews living in the Ukraine. The Jews had been depicted as the exploiters of the common folk who robbed the working class of its hard earned profits. In the span of several weeks, ninety out of one hundred and twenty Jewish communities of the Central Ukraine were destroyed including Tetiev. In Tetiev alone, four thousand Jews were killed and over the course of nearly one thousand pogroms, more than one hundred thousand Jews would perish.

The Kishniev pogrom seventeen years earlier is much better known than what took place in Tetiev. Even though only forty three Jews were killed, the pogrom shocked the Jewish world. It was later immortalized by the great Hebrew poet Chaim Nachman Bialik, who was sent to Kishniev on behalf of the Jewish Historical Commission of Odessa in order to interview survivors and provide a detailed report of what occurred. He was shocked and deeply angered by the devastation he witnessed. His poem, Al HaShechita “On the Slaughter”, describes his rage and opens with an accusatory finger pointed at God. He writes ”Oh heavens above, beg mercy for me! If a God be in you, with a path in your round”[1] In the line’s that follow, Bialik’s anger at God’s perceived indifference to the carnage turns into a sense of righteous fury. He lays the blame at God’s feet.

Executioner! Here is a neck for you

To ax with your arm. Butcher me like a dog.

All the world is my slaughtering block,

and I’m just one more Jew.

My blood’s fair game. Strike the skull and spray

Murder’s blood; blood of babes and old men on your raiment

Will never be washed away

Even one hundred years later, the indignation and pain in Bialik’s words is palpable. He knows that Jewish blood is cheap and easily spilled without consequences. A feeling of profound injustice permeates his words for what can ever make up for the brutal deaths of innocents? Though written in modern Hebrew, Bialik’s poem follows a long established Jewish tradition of questioning God in the wake of tragedy. His words echo similar themes offered by the prophet Jeremiah in the wake of the Temple’s destruction:

On none but me He brings down His hand

Again and again, without cease

He has worn away my flesh and skin;

He has shattered my bones.

All around me He has built

While not as famous as Bialik’s, there was Hebrew also a poem composed about the Tetiev pogrom by Yakov Orland. After surviving the pogrom, he would move to Israel and go on to have an illustrious career as a writer, playwright, and poet. His poem, titled, Ani Nose Imi “I carry with me” is an important reflection on the tragedy that took place and later became a popular Israeli song when put to music by Shlomo Artzi. Written about twenty years after the pogrom, it lacks the anger that characterized Bialik’s words. Instead, one can hear within a sense of longing and hope.

The poem is written as one side of a conversation, perhaps directed at himself or the loved ones he has lost. It opens with an acknowledgment of the great pain he still feels, along with the void that is left in his heart by the destruction of his hometown.

I carry with me the pain of silence

The scene of speechlessness that we burned out of fear

Behold, you said to me” The city is so empty”

Behold, you said to me “We will be silent a bit together”

In my window, the flowers of comfort have already wilted

In my window, the vision of wide open spaces has closed

Only the streets continue to smile with their full breadth

Like Bialik, Orland’s poem also evokes themes from Eichah. The destruction of one’s home leads to an overwhelming sense of loneliness and alienation. The megillah opens (1:1), “Alas! Lonely sits the city once great with people. She that was great among nations has become like a widow.” However, despite the pain, he is not willing to wallow in anger or self-pity. In the second half of the poem, he returns to Tetiev once more if only in his imagination. He hopes for a day when his pain will finally melt away and that which was broken will once again be made whole. He concludes:

To the beloved benches in the garden of the city

Maybe we will meet again the faces that we have forgotten

Maybe we will hear anew the song

In those dreams on the cold bench

In those dreams we will put to sleep our past

Until one day, great and familiar

The kisses will once again fall on our necks

Within his plaintive words can be a heard a wistful yearning for a better future. They echo the concluding verse of Eicha in which the Jewish people proclaim their desire to return home once again, “Return us back God to You and let us return, renew our days as the days of old.”