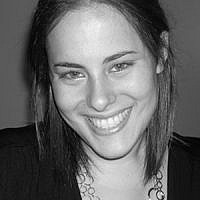 The Blogs
Samantha Brinn Merel
Apply for a Blog
Advertisement
Please note that the posts on The Blogs are contributed by third parties. The opinions, facts and any media content in them are presented solely by the authors, and neither The Times of Israel nor its partners assume any responsibility for them. Please contact us in case of abuse. In case of abuse,
Report this post.

I tried to stay above the fray these past few weeks. To keep my beliefs to myself. To think my thoughts and have my opinions, but to have them quietly. Because the truth is, part of me felt like maybe I didn’t have a right to speak out from my safe and sound American Jewish existence. That my opinions were somehow less-than because I was giving them from a house in New York instead of from a bomb shelter in Israel where I was taking cover from terrorist-fired rockets.

But then I read that Palestinian terrorists were caught trying to infiltrate Israel through a tunnel with the sole purpose of attacking Israelis, I read the millionth New York Times article that began with some form of “children were killed in Gaza today by Israeli airstrikes,” and I saw this positively irresponsible illustration comparing casualties in Israel and in Gaza without a single explanation for the difference in numbers.

And I remembered something. I remembered that the Jewish people alive today are the first generations that have been blessed with the creation of the State of Israel. For two thousand years we wandered and we lived on land that belonged to other nations. We prayed and we hoped and then, in 1948, the State of Israel was proclaimed. The very next day the surrounding Arab states attacked the new Jewish homeland.

And here we are. Sixty-six years later and once again fighting for our land. For our very right to exist as a nation and as a people.

And we are all but alone.

Pick up nearly any newspaper in wide circulation or log on to nearly any news website and you will see it. That the level of anti-Israel sentiment in this country has risen to a frightening level. That Israel is constantly touted as an aggressively violent state that is engaging in a unilateral slaughter and Hamas is painted as a group leading an oppressed people who are dying in droves at Israel’s hands.

It is true that there are a lot of civilians dying in Gaza. And it is also true that some of the deaths are children. Young ones. That is a terrible thing and I promise you that any sane supporter of Israel acknowledges this. But those same people will also tell you that we need to be clear on who is to blame for those deaths.

You see, this is not an ordinary war. Israel isn’t fighting a country with an organized military and rational objectives. Hamas is a terrorist organization that will stop at nothing to get what it wants; the eradication of the Jewish people and destruction of the State of Israel.

And so they shoot rockets into Israel with increasingly long ranges, they bury missiles under the buildings where their children go to school, they build tunnels to smuggle weapons, they urge their people to act as human shields to raise the body count, they fire their rockets from densely populated areas, they refuse to honor the terms of a cease fire, and they leave civilians out in the open while the commanders flee to the underground bunkers.

And Israel defends itself, just like any other country would. But before the Israel Defense Force launches its weapons it places phone calls to civilians in Gaza warning them of imminent attacks on the area, giving the civilians time to flee. It drops leaflets telling civilians to keep a distance between themselves and the Hamas commanders, who are the targets of the Israeli strikes. It calls off airstrikes when the pilots spot large groups of civilians. It makes a herculean effort to engage in pinpoint strikes to military targets, minimizing harm to civilians as much as possible. And it puts off launching a ground invasion as long as possible, until it became clear that one is absolutely necessary.

It is not Israel’s responsibility to take care of the civilians in Gaza, and yet it does, because Israel values life; the lives of its citizens and the lives of its enemies. The Israeli government makes sure that there are enough bomb shelters to safeguard its citizens when the Hamas rockets come flying. The country has invested time and money into a missile defense system that can not be called anything but a miracle. The army makes sure the citizens of Israel are prepared for threats and know what to do and where to go when those threats are imminent.

So to those of you who really and truly believe that the fight is unfair, that Israel is somehow oppressing the people of Gaza, I ask you, what would make it fair? Would you be satisfied if Hamas managed to kill one hundred Israelis? Two hundred? Would that somehow make this a balanced war? Would you be satisfied if Israel stopped its airstrikes and powered down the Iron Dome to let the barrage of missiles from Gaza pound the country unabated?

An entire group of people in this country and in the rest of the world have somehow gotten the mistaken impression that if Israel would only lay down its weapons, this whole pesky conflict would just go away. I guarantee you, Israel wants nothing more than to stop fighting, but unless Hamas and the rest of the Arab world will do the same, we are where we are.

I have been to Israel many times. I have strolled the streets of Jerusalem and prayed through tears at the Kotel, the Western Wall. I have stood on the top of a mountain and watched the sun set over the country while strains of Kabbalat Shabbat, the prayers welcoming the Jewish Sabbath, drifted out of a nearby synagogue. I have been to the graves of our forefathers and mothers in Chevron and Beit-Lechem. I have walked the same paths traveled by generations of Jewish people and I have felt their presence keenly. It is in Israel where spirituality is tangible. Where I understand that I am but one link in a chain that binds me to the ones who came before and the ones who will come after; to a people with a rich history and a future that we will stop at nothing to secure and protect.

And so we fight. We fight against terrorists who wish us to death and who want blood. The blood of my friends. The blood of my family. The blood of my people. We fight to safeguard our country that was built with hardship, sweat and tears so that Jews the world over could have a place to call home. And we fight because not fighting means ceding Israel to the people who wish to destroy it and we will never, ever allow that to happen.

Call me a Zionist or call me right-wing. I assure you I am both of those things. I am also a Jewish person living in a world where it has become startlingly difficult to tell the difference between anti-Zionism and anti-Semitism and I believe with every fiber of my being that having a strong Jewish state is the only way to assure that we will always be protected. Israel is our homeland, our security, and our future.

And we will defend it; today, tomorrow, always.