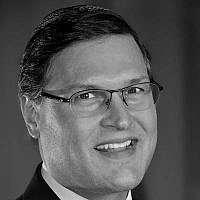 The Blogs
Rick Rheins
Apply for a Blog
Advertisement
Please note that the posts on The Blogs are contributed by third parties. The opinions, facts and any media content in them are presented solely by the authors, and neither The Times of Israel nor its partners assume any responsibility for them. Please contact us in case of abuse. In case of abuse,
Report this post.

As the Jewish world observes Tisha B’Av and considers the horrific consequences of internecine struggles that devolve into ad hominin attacks and acts of sinat chinam, baseless hatred, I’m moved to appeal to you to apologize and resend your unfortunate message in the New Republic against Aipac.

Rarely is there unanimity among the Jewish community on any issue, and certainly not on Israel. Naturally different organizations will take different approaches.

It seems your and J Street’s organizational philosophy is to use the power of a grassroots base exclusively on one side of the political aisle to urge the U.S. government to pressure the democratically elected government of Israel to adopt policies you prescribe for Israel’s future, while AIPAC builds support from both parties for the U.S. government to strengthen and expand the U.S.-Israel relationship. They believe policy differences can be settled privately as befitting two allies. Both strategies have their respective advantages.

Both AIPAC and J Street have garnered support from the Jewish community. While J Street has long been engaged in political fundraising in its own name, it was only this election cycle that AIPAC became directly engaged in its own name. Political battles have been fought between candidates backed by each J Street and AIPAC, most notably perhaps in Maryland and in Michigan. This is all fairly standard political maneuvering in America.

Not only would this result in Israel becoming a partisan wedge issue, but as antisemitism spikes across the country it is wrong and dangerous to call for special standards for how a major organization in the Jewish community can engage.

This political battle should be fought in the districts and in the ballot boxes. Calls to apply a blanket policy and treat AIPAC or its super pac as though its unique in the political ecosystem is counterproductive and counter to the fundamental American and Jewish values we embrace.

Your call is an echo of others who have made a similar plea. I urge you to retract your position with a clear and unequivocal rejection, and consistently renounce efforts by others to pursue such a dangerous approach.

About the Author
Rabbi Rick Rheins is the Senior Rabbi at Temple Sinai in Denver, CO. He also has severed as past-President of the Rocky Mountain Council of Rabbis and Cantors and Vice-President of the Solomon Freehof Institute of Progressive Halakah.
Related Topics
Related Posts