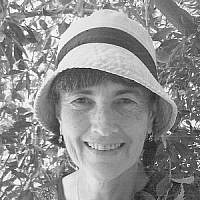 The Blogs
Rena Teeger
Apply for a Blog
Advertisement
Please note that the posts on The Blogs are contributed by third parties. The opinions, facts and any media content in them are presented solely by the authors, and neither The Times of Israel nor its partners assume any responsibility for them. Please contact us in case of abuse. In case of abuse,
Report this post.

I was living in Israel expecting my third child thirty years ago when I heard the news that you had left us. It was on Shabbat Nachamu – the Shabbat of comfort.

But nothing could comfort me.

You were a real gem of a father – so kind, so gentle, so clever. As a child my mind would sometimes wander to that scary place of imagining the world without you and I remember crying myself to sleep.

The world without you was not a world I wanted to live in.

By the time I was born, you had already accomplished so much and you had touched so many lives. Throughout my life I have met many people who knew you then.  “Joe Green was your father?” they say. “What an orator!” Or “Without Joe Green there wouldn’t have been any Yiddishkeit in Johannesburg.” Or “He was a great historian.” Or “Your father inspired us all in those days.”

You carry the name of your maternal grandfather Joseph Saul Rabinowitz whose ancestors Meir and Samuel Katzenellenbogen were the 15th Century Chief Rabbis of Padua. How I loved hearing you tell the story of Samuel’s son, Saul Wahl, king of Poland for one day. And of how he spent that one day ridding Poland of all its anti-semitic laws. And you called me ‘princess’ because I was descended from a king.

Isaac Green, your father, was an acknowledged Talmudist and a Shochet in South Africa. I am honored to have on my bookshelf, his well-worn set of Mishnayot, in which he recorded your birth in 1910 and the births of each of your siblings.

I have heard how you and a small group of followers founded the Hashomer Hadati movement in South Africa (later to become Mizrachi.) And I am witness to how its offshoot, Bnei Akiva, has made Judaism accessible to thousands of young people there, connecting them to their roots in the land of Israel.

Almost 15 years before I was born, you were chosen to be the South African delegate to the 1939 World Zionist Congress in Basle Switzerland. I feel proud on your behalf.

And then, during those terrible years of World War 2, you answered the call, serving as a chaplain to the South African Jewish forces ‘up north.’ I have no doubt that you were an inspiration there too. And you learned about archeology, history and different cultures. You had contact with the Karaite community in Egypt and with Italian prisoners of war. You corresponded with Jewish communities in far-flung places like India and China.

And all the while you collected stories from Yiddish newspapers about the emotional, spiritual and physical heroism of the Jews who suffered through the Holocaust. And I remember well how you refused to accept the ‘lambs to the slaughter’ narrative of Europe’s Jewish communities.

Your Doornfontein, Johannesburg, pharmacy was much more than just a chemist’s shop. It was the headquarters of the Hashomer Hadati movement. You closed the shop when a law was passed forcing pharmacies to stay open on Shabbat.

You took a position at the South African Zionist Federation (SAZF) and so began the Mobile Film Unit. I remember how you would source and import films of Jewish and Israeli interest. And I learned about my Jewish heritage and about the IDF and other aspects of life in the fledgling Jewish state from our home previews.  Whenever you would take me on your travels to show these films to the outlying Jewish communities, I would always feel so proud of you as you addressed the crowd (often in Afrikaans for the Afrikaans farmers who also attended.) You would always tell them that you were bringing them a message from Jerusalem.

During the school holidays, I would spend time in your office on the 5th floor of the SAZF building in de Villiers Street, Johannesburg. I still remember the pungent smell of the glue as you spliced the 16mm movies from reel to reel.

This Mobile Film Unit evolved into the SAZF audiovisual library which posthumously bears your name.

Abba, you were so multi-faceted and you continued to learn and to grow throughout your life. You became a member of the Club of Rome, a society focused on the future of the planet, long before most people even began thinking about ecology, energy sources, pollution and waste. I recall you reading Buckminster Fuller and Margaret Mead amongst a wide range of authors and scholars, both Jewish and Gentile. You really were a man for all seasons.

You were a follower of Rav Kook, not only in religious Zionism, but also on his stance about Jewish vegetarianism. You founded the South African Jewish Vegetarian Society. Like Rav Kook, you believed that the Messiah would live in a vegetarian world.

Abba, you certainly have left your mark on the South African Jewish community.

This Shabbat Nachamu, 30 years on, I want to give you the honor and the recognition – which you never sought for yourself but which you so deserve – for being a man of true humility, vision and integrity.

About the Author
Rena Teeger was born in South Africa, and lived in Israel from 1979 to 1988, when she returned to South Africa with her family. She is the mother of four daughters. In 2004 Rena returned to live on a small rural moshav in central Israel. She is a qualified teacher who taught for many years at a religious Jewish day school. Rena spends her days writing and editing.
Comments