As part of my work in creating understanding between faith leaders, I have also reached out to several of your deputies, some kind-hearted and open minded friends (this is not a good time to reveal their names), who had agreed to work together for mutual understanding. Yet, when the time came for them to join activities, they did not live up to their promises. Nor did they excuse themselves. Eventually I learned that the orders came from on-high within your organization to prevent their participation. And so, we are in the same city, ostensibly worshipping the same God, but we have never interacted, and at this moment the prospect of dialogue seems farther removed than ever. So, forgive me for writing to you in the form of an open letter, in a language you do not speak, in the hope that some of our common friends (we have a few) could bring this to your attention. 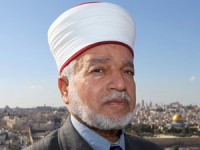 
The metal detectors have come down. Perhaps calm will be shortly restored. With the pressures of the urgent and life-threatening moments hopefully behind us, it is time to start asking some of the deeper questions the past 10 days has raised.

Sheikh Hussein, in response to Israel’s putting up metal detectors, you announced (so say the news headlines; perhaps they don’t capture the nuance of internal Muslim jurisprudence) that any prayers offered after passing through the metal detectors are null and void. My Palestinian friends also shared this with me, so there is certainly a widespread perception that you made such a statement.

My Palestinian cleaning-lady (who is much more family than she is “cleaning lady”) queried how could anyone speak for God in this way. Is not prayer a moment of sincere reaching out to God? It is God alone who decides what prayer to accept and which to reject. My tradition teaches me, and I believe yours does too, that God looks to the heart of the faithful. I can understand a protest and a boycott in response to political or security moves. But if indeed you somehow related compliance with a political or public move to the efficacy of prayer, to God’s view of things, then I wonder if we mean the same thing when we say “prayer”. Is prayer for you not something of the heart that God alone can judge?

The questions became stronger for me day by day, as I read in the news about riots, or violence, breaking out “following prayers”. I couldn’t help asking myself: what kind of prayers are these that readily lead to violent expressions when they are over? I spend a lot of time in prayer, as I am sure you also do. I cannot imagine coming out of prayer and acting with violence. It is an internal existential contradiction. Prayer should (and I hope does) make me more peaceful, compassionate, understanding. What kind of prayer leads to violence?

You might respond, were we to ever talk, that I cannot compare the situation of the victim with that of the oppressor and that the victim (you and your community in this case) has no choice but to turn violent. Such a response finds no echo in me. To begin, we are all victims. It is a false narrative that only one side is a victim. But more to the point, you will readily acknowledge that Jews have been victims for millennia, including much suffering under Muslim regimes. Suffering has never lead to violent responses, the likes of what we see daily on television. It has made us introspective, prayerful, repentant, in some ways more noble. I cannot think of a single incident in a long Jewish history that has known suffering incommensurably worse than what you and your community are undergoing, that has channeled prayer to violent response.

So, the question continues to haunt me – what is the prayer experience that can so readily translate into violence?

Muslims praying outside the Temple Mount (photo by Flash 90)

The Power of the Collective, The Reality of the Mob

I’ve watched many images of Muslims in prayer, facing soldiers and gates, over the past week. The sight of Muslims in prayer always evokes deep respect in me. I admire the coming together in rows, the strong message of cohesion for a common spiritual purpose. I admire the prostration, in surrender to God. I, like many Jewish teachers over the centuries, can see great beauty and spirituality in Muslim prayer, which I have observed and shared under various conditions for years.

This week I began querying how your prayer is practiced. Bowing down is a sign of surrender. How can you surrender and then throw rocks the next moment? Surrender is giving all power to God. One great Jewish teacher, Rabbi Levi Yizchak of Berdichev, explains what we do when we, Jews, prostrate once a year on Yom Kippur – we give all our power back to God, we belong to Him fully. I cannot reconcile surrender with violence. To me, if falling on your face amidst a large crowd can lead to violence, then it is not true surrender. It is not true prayer.

This sad thought led me to an even sadder thought. Jews suffered in the hands of Christians on Good Friday, at the time Christians recalled the crucifixion of their Lord. Jews were blamed. Mobs came out of Church and regularly lynched, attacked and harmed Jews. That was a terrible expression of where prayer can go wrong. It showed what happens when communal solidarity creates a mob. What I saw in recent days is just that – prayer generating a mob. And so, I ask myself once again – what kind of prayer is it that can make a mob?

I tried to think of similar behaviour on the Jewish side. I am on the first row of Jews who condemn attacks against Muslims and Christians. (Click here to read a blog on this). I cannot think of a similar reality of a Jewish mob attacking others following prayer. The last time I can recall a mob was 2,000 years ago, at the site of the Temple, on internal Jewish grounds, and we consider this part of the hatred that led to the destruction of our Temple, a destruction we commemorate this week. Looking around, I see Christian mobs have also disappeared. The Church has done some serious spiritual work to uproot bad teachings, bad attitudes, bad prayers. So, it seems, it is the sad reality, that Muslims alone seem able to reconcile “prayer” with violence and mob behavior. And it seems the problem is bigger than you, your leadership or the present clash between Israelis and Palestinians.

Sheikh Hussein, maybe it’s time to meet and talk, not about politics and solutions, but about whether we really serve the same God and whether we really mean the same thing when we say “prayer”. For me, prayer is the heart opening up to God and being transformed through that encounter. My prayer makes me more sensitive to your pain.

I ask myself – do we have a common God and can we share an understanding of the activity that is most fundamental to both our lives as religious people? If not, what hope is there for us, for the world?

Maybe it is time to start a new conversation on this matter, the core of our faith. Here is one suggestion of how we could begin that conversation. One of Islam’s great teachers, Imam Ghazali, spent years on the Haram Sharif. His teachings are still taught today on the Holy Mountain. There is a chair dedicated to his teachings; I know the teacher. Imam Ghazali taught that presence of heart is the first condition of prayer.

Maybe if we can study Imam Ghazali and Rabbi Levi Yitzchak of Berdichev together our hearts can open up to each other and we can guide our communities to a life of prayer that is real, because it touches what matters most, the open heart.
It is time to meet.