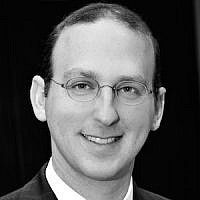 The Blogs
Adam Scheier
Apply for a Blog
Advertisement
Please note that the posts on The Blogs are contributed by third parties. The opinions, facts and any media content in them are presented solely by the authors, and neither The Times of Israel nor its partners assume any responsibility for them. Please contact us in case of abuse. In case of abuse,
Report this post.

Yesterday, I attended the funeral of 16-year-old Shira Banki, who passed away days after being stabbed by a fanatic ultra-Orthodox man at last week’s Jerusalem Pride March.

As I walked down the dirt path to the Kibbutz Nachshon cemetery, I recalled similar walks that I made last year, as I attended the funerals of fallen soldiers during Operation Cast Lead. The soldiers’ funerals contained a sense of purpose — these young men died protecting the State of Israel from terrorism; Shira’s funeral contained a sense of emptiness, of abject loss. There is no acceptable explanation for her murder; no military general will comfort the family by speaking of the larger ambitions of the Jewish people. Rather, Shira died because of, in the words of her family, “stupidity, evilness, and recklessness.”

Three years ago, the Banki family was featured in an article about secular Israeli families with many children. The Bankis were blessed with four children — Shira was the eldest. Mika and Uri Banki were quoted as saying, “[The reason we had many children is not] because of demographic issues, and it’s not a competition. We can only speak about quality. Quality [parenting] is to raise good citizens, children who will bring happiness to themselves and their surroundings.”

As Jerusalem’s Rabbi Benny Lau pointed out, in what upside-down world are the Bankis considered secular and the murderer, Yishai Shlissel, considered religious? The Talmud teaches, “Always let the left hand thrust away and the right hand draw near” (Sotah 47). In other words, we should embrace with greater strength than we reject. Shira’s last moments were spent embracing others; Shlissel, tragically, chose rejection and violence.

We can learn so much from the Banki family. They taught their children openness and tolerance, and taught them to stand in support of those who live with differences. And, as they encountered tragedy, they embraced life: they chose to donate Shira’s organs.

As I left the funeral, I was approached by television news crews for comment. “If you didn’t know the family personally,” they asked, “why did you, a rabbi from Canada, come to the funeral?”

I thought for a moment before answering. I said, “I came because I wanted the family to know that Jews in Canada care about them, and we will remember their daughter; I came because I wanted to remind myself and my community that our Torah is a Torah of love and inclusiveness, and not a Torah of hatred and violence; and I came because Shira’s last teaching — that which she was engaged in during the march in Jerusalem — was that there is power in simply showing up, and showing your support. So I simply came to show my support to Shira’s family and to those who live in fear of being attacked for their lifestyles or beliefs.”

Shira’s family wasn’t religious, but she lived a life of holiness; it’s a life that our religious communities should honor, remember, and aspire to emulate.

About the Author
Rabbi Adam Scheier is Senior Rabbi of Congregation Shaar Hashomayim. He is Past President of the Montreal Board of Rabbis, Vice-President of the Rabbinical Council of Canada, and Senior Rabbinic Fellow of Jerusalem’s Hartman Institute. Rabbi Scheier is a founding member of the Board of Trustees of the International Rabbinic Fellowship, a leading Modern Orthodox organization consisting of over 200 rabbis, communal scholars, and clergy. He also serves on the Rabbinic Advisory Board of Yeshivat Maharat, the first institution to train Orthodox women as spiritual leaders. Rabbi Scheier is proud to be the rabbi of the first synagogue to hire a graduate of Yeshivat Maharat. Prior to his post in Montreal, Rabbi Scheier participated in the founding and development of the first Yeshiva in post-World War II Germany, and has continued to work extensively with the immigrant Jewish community in Germany. Rabbi Scheier has been an advocate for “spiritual activism” on behalf of Jews around the world. He had led solidarity visits to many different communities, including Paris following the 2015 attack on Hyper Cacher; Montana following anti-Semitic threats against the local Jewish community; and Venezuela following hate crimes against the Jewish community. In 2010, Rabbi Scheier testified before a Canadian Parliamentary committee on the topic of human rights in Venezuela. In 2015, Rabbi Scheier co-edited and published the Canadian Haggadah Canadienne, which received positive acclaim in Canada and worldwide. In July, 2016, Rabbi Scheier was honoured to accompany Prime Minister Justin Trudeau on his visit to Poland and Auschwitz. Rabbi Scheier has published editorial pieces in the Montreal Gazette, the Times of Israel, and CIJA’s The Exchange, and is a frequent contributor to the Canadian Jewish News. Rabbi Scheier is married to Rabba Abby Scheier, and they have been blessed with five daughters, Aviya, Ayelet, Annael, Allegra, and Arella.
Comments