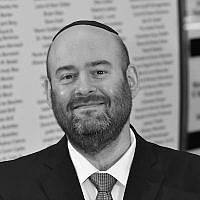 My father, Jack Rosenblum A’H, would have been 82 years old this past month. It has been 20 years since his passing. I had originally intended to deliver a dvar Torah at my shul on his birthday, March 21, but it wasn’t meant to be. In any case, I feel that his life and his path were inextricably linked to Pesach, so I shall try to bridge my thoughts to the themes of Torah and tradition and to our role in the story of the Jewish people, as he so liked to do in his divrei Torah.

My father first saw the world through the eyes of a refugee. Born little more than a year before WWII into an influential family in Krakow, he fled east with his brother, parents and a few other family members days after the war began. The family first escaped to Soviet occupied Poland, and then eventually made a harsh journey to a refugee camp in Kazakhstan, where they remained for the rest of the war. It was a difficult existence, and a tragic way for a small child to learn about the world. After the war, the family returned to Poland, to find the majority of his relatives had been murdered. My father described the heart wrenching task of the returning Jews of Krakow as the adults removed the remains of their relatives from the infamous Plaszow concentration camp for burial. Much of the site had been sealed off, and only well after the war ended were the murdered finally laid to rest.

I believe he was indelibly marked by these experiences.

My grandparents tried (unsuccessfully) to reclaim family property in an increasingly harsh and anti-Semitic environment. Many times, my father told me, he was beaten by thugs as he walked to and from cheder. And so he first encountered Jewish strength, as he was saved from a beating one day by Hashomer youth. He wasn’t bothered again. Soon, the family made their way to Paris, and eventually to Toronto, Canada, where he celebrated his Bar Mitzvah in 1951.

I learned so many things from my father in the 30 years I was blessed to have with him. An early Pesach memory of mine was his recollection of the one-sided arguments he had with my grandfather about V’Hiy Sheamdah and Shefoch Chamatcha at the seder. He would ask where the Almighty’s’s protection was and why his wrath was withheld was during the Shoah? My grandfather, gentle as he was, would remain silent, knowing, perhaps, that asking the question “Zo Torah ve Zo Sechora?” as in the Yom Kippur liturgy, would shake the very foundations of his world. This stillness never satisfied my father. For the remainder of his life, he was a restless soul, searching for knowledge and understanding, looking for God’s presence in history and in the momentous events he lived through. And sometimes, he found it.

One of my father’s favorite divrei Torah was a profound statement by the iconoclastic Hasidic philosopher, Rabbi Menachem Mendel of Kotzk. Unlike most Hasidic Rebbes of his time, the Kotzker had few students and only a handful of followers. Yet he illuminated the meaning of life as a Jew as no other could.

In Devarim (12:4), a seemingly extra sentence between two self-contained lo-taaseh imprecations says “lo taasu ken l’hashem elokeichem.” – “Do not do thus to the Lord your God.” The Kotzker Rebbe observed that it is surprising none of the sages commented on this, as there isn’t even an extra letter in the Torah, let alone an entire sentence. No, the Kotzker said. It is not extra. This Passage had an entirely different purpose. He said that you must read “ken” as “Yes”, not as “Thus”. His revolutionary interpretation was don’t do “yes”. the Almighty doesn’t want yes-men! He wants those who will contend with him. He wants us to be like our forefather Yaakov, whose struggle with the Almighty was so momentous that he was renamed Yisrael, literally “He who struggles with God”.

My father was blessed with an insatiable curiosity, and an ability to teach himself  several languages, archaeology, scientific and economic theories, art history, philosophy, Talmud, even blackjack. What he couldn’t teach himself, he found brilliant minds to learn from. I believe that this thirst for knowledge was his exodus, his yetziat Mitzrayim. This was his way to escape from the bonds and the mentality of suffering and exile. This was his way to be free.

Growing up, almost every Sabbath lunch was, in a way, like a seder. My father would bring a question or a deep explanation of something in the Parasha to challenge me and my siblings. He demanded that we consider it, that we turn it over and defend our conclusions. For me, this constant challenging was his way of fulfilling the mitzvah of ‘Vehigadeta Levincha’, ‘and you shall tell it to your children.’ And he didn’t restrict it to the seder. He did it every shabbat, “Zecher Liyitziat Mitzrayim.”

I don’t think that my father was able to fully throw off the shadow of his earliest experiences until, perhaps, the last few years of his life. Even at his most exuberant, he was haunted in his own way by them. That didn’t stop him from loving his family, his community, Am Yisrael and Eretz Yisrael. Rather, it compelled him. He didn’t have the wherewithal for big philanthropy, but he was animated by a great need to help his fellow Jew. Every Pesach, my father would drive to the Ontario Food Terminal, and reach out to more than a dozen vendors. He’d fill up his van with the best produce, and quietly distribute it to needy families in our community before the seder. “Ki Gerim Hayyitem B’Eretz Mitzrayim”.

When there was a need to safeguard our community, my father was involved in its security, standing watch at events and during dangerous times. “Leyl Shimurim Hiy.”

When Israel was in grave danger in 1973, he sought to volunteer there. He encouraged me as I became involved in activism for Soviet Jewry, and for Israel. He was a staunch adherent of Menachem Begin’s revisionist politics and connection to the wonders and the pain of our collective history. When he and my mother sang songs of the chalutzim from our Israeli Folk music songbook, their love for the people and the land of Israel rang out as clearly as the “Leshana Haba’ah B’Yerushalayim” we sang at each seder conclusion.

My father understood implicitly something that I learned much later on from Rav Noach Weinberg zt’l. When a Jew learns Torah, even if only how to perform one mitzvah, it is incumbent upon him to teach it to his fellow Jew. Indeed, I can recall going with him to a shiur given by Rav Yaakov Weinberg, zt’l, who had been the Rosh Yeshiva at Ner Yisroel in Toronto, and who became the famed Rosh Yeshiva of Ner Yisroel in Baltimore. I recall only that he was enthralled by learning; and I found out later that Rav Noach and Rav Yaakov were brothers.  At age 43, my father began giving a regular Talmud class at the  shul we attended at the time. It was rare thereafter to find the coffee table in our den without a pile of open or recently closed sefarim atop it.

Yet my father’s talents never filled his restless soul. It is sufficient to say that he was emotionally compromised by his experiences, shaping him in both good and challenging but inevitably sharp ways. When he passed away at 62, those sharp edges had finally begun to soften.

I miss him every time I open a sefer.

I’ve inherited from my father the concept that all our responsibility as Jews, as parents, as teachers, as brothers and sisters distills down to these two elements so essential to his life and to our approach to the Pesach seder. To struggle, to seek, to ask, to yearn, and never to be content with a rote answer; and when the time comes, to tell the story, to convey the wisdom, the beauty, the insight, and the sorrow of our age-long heritage.

It follows that if we want the Almighty to stand up for us in every generation as they rise up against us to destroy us, we must do our own hishtadlut. We must defend the ways and lives of those who ask and those who tell in any way, with any talents we may have, so that we will never need to ask him to pour out his wrath and avenge our spilled blood again.

May we all celebrate these responsibilities, asking and answering  together again in the coming years, and May our days be renewed as of old. Chadesh Yamenu K’kedem.

About the Author
Ari Rosenblum is the CEO of the Jewish Federation and Foundation of Rockland County. A senior professional with experience at several leading Jewish institutions, Ari has written, lectured and educated on Israel advocacy, anti-Semitism, and Jewish thought for over 20 years. He lives in New York. Views expressed in this blog are his alone.
Related Topics
Related Posts
Ari Rosenblum
Comments