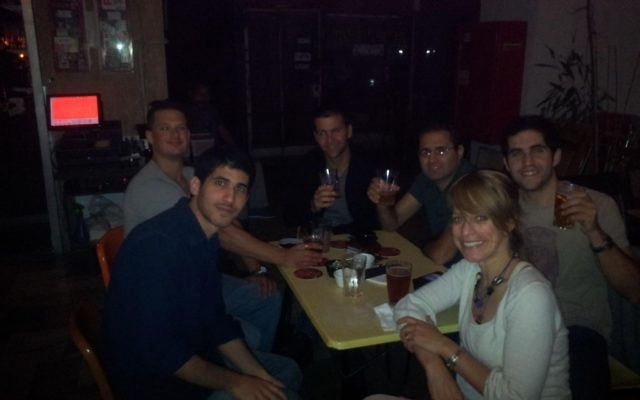 Toasting the imminent release of the Heyku app

It may be highly unoriginal to write an article about Israel as the start-up nation, but no one ever wrote about my teeny part in it. Of course I didn’t really have even a teeny part in it until recently.

It all started with a LinkedIn email I received from an Israeli I’d never heard of who wished to speak to me about helping him with his new social media app. I debated deleting the email immediately as spam, but curiosity made me give the guy a chance. Though at that stage I was more curious if he’d actually hand-picked me from my LinkedIn profile, or merely spammed thousands of emails hoping for a bite.

I made the call, and it actually sounded legit and intriguing. I thought, ‘what the heck?’ and rode out to Tel Aviv to meet with the CEO.

So here’s the thing: the CEO? He’s 26 years old; but no matter. After a brief meeting with him, I was highly impressed with this clever, ambitious, Technion grad who called himself the CEO of Heyku, a company I’d never heard of. He seemed to be both creative and talented and I got the feeling that this is the kind of guy who could be behind one of those Israeli start-ups you always hear about.

Turns out he was looking at me as a possible outside adviser to their new team to help them prepare to launch their brand new iPhone app. The app, like the company, was called Heyku.  After this initial meeting he was sufficiently satisfied and I was sufficiently curious to take the next step so he invited me to meet the team.

Putting my thoughts into words with the new Heyku app

We arranged to meet at a café in Tel Aviv. I thought about asking them if it was kosher, but figured, why rock the boat already?  So picture this: There I was, an observant, American immigrant woman from Gush Etzion meeting up at a café with several secular Israeli men in Tel Aviv. If you think I was out of my element at that point, when I opened the menu the first word I saw was ‘shrimp.’

But was I really out of my element? Only when it came to the restaurant. The shrimp anecdote is just that… an anecdote. It was just a coffee meeting anyway and I quickly forgot about the shrimp; and the focus was on the new app. The team assembled was hugely talented and very impressive. The app, coming from a team like that, was creative, clean and tremendously compelling. They explained to me how this writing app helps people ‘share a moment.’ They created this cool step-by-step guided writing process to make it easy for people to express their moment in three lines on a pretty little ‘note’ that can be shared within the Heyku app, or in Facebook, Twitter, Instagram, or wherever you want really. Anyone who is connected to me on social media has likely seen some of my own profound thoughts.

My biggest question was, what does Heyku add that Facebook and twitter don’t already have? The answers are quite simple: it’s clean and pretty, it’s structured, and has that brilliant guided-writing feature that can take the most illiterate person and turn him into Robert Frost. Maybe not quite but you get the idea. The three-line result was inspired by the traditional Japanese haiku, hence the name.

As the Heyku team was preparing to launch the app, they realized they could use a professional to have ‘on hand’ to advise their team in marketing and social media strategy and they found me.  I was delighted, flattered, and kind of excited about having a part in a cool new app before it had even launched.

Of course I had to try out the app first. Really try it. As it is not yet available on Android, I downloaded it onto my iPad. I was a bit skeptical at first, I’ll admit. After all, what could a bunch of Israeli guys know about American sensibilities and English writing? Clearly a lot. The professionalism and the amount of research and painstaking attention to detail they invested in Heyku was amazing.

It didn’t take me long to discover that Heyku actually is a great app. Something about the way it works, that it gets you to zoom in on the most important thoughts on your mind, and compose your ‘moment’ in a deep or philosophical way… was quite a surprise!

One of my deep, philosophical heykus…

I test-drove the app for a few weeks, keeping careful notes of my comments and feedback. They took every word I said to heart, and just kept on making the app better and better.

Finally in mid-April the app was launched. What a thrill! I’ve been riding the wave of excitement as the app gains momentum, taking pride as though I was actually one of the brains behind the app. With all of the labor involved in creating and launching a start-up and an app, I’d liken the process to giving birth. While I was hardly the mother or father in this whole operation, I think I’ve been a darn good labor coach. I’m really proud of the whole talented Heyku team; all of which I now count among my friends. And I’m really excited to be doing my own little bit in building the start-up nation.

Toasting the imminent release of the Heyku app
About the Author
Laura Ben-David is a photographer, public speaker and Israel advocate. Inspired by her Aliyah experience, Laura began writing and never stopped. She is the author of the book, MOVING UP: An Aliyah Journal, a memoir of her move to Israel. She has spoken all over the world about Israel, Aliyah and other topics, often with beautiful photographic presentations. Formerly the head of social media at Nefesh B'Nefesh, Laura is the director of marketing at Shavei Israel as well as a marketing consultant.
Comments