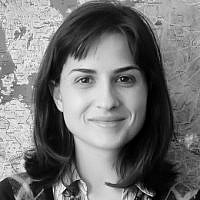 The Blogs
Emily Boulter
Apply for a Blog
Advertisement
Please note that the posts on The Blogs are contributed by third parties. The opinions, facts and any media content in them are presented solely by the authors, and neither The Times of Israel nor its partners assume any responsibility for them. Please contact us in case of abuse. In case of abuse,
Report this post.

When I told friends and family that I was going to Israel to study Farsi for a week, I was met with no end of quizzical looks. Why there? Is there nowhere in Europe you could try? I had already spent much time looking in both Europe and North America, but the options were either too expensive or not convenient given work commitments. When I landed at Ben Gurion Airport, even the driver assigned to me stressed the importance of learning Arabic instead. It was a little alienating, and only seemed to stress the oddness in choosing Israel as a destination. The feeling was something akin to opting for Lebanon over Switzerland for a skiing vacation.

Anyway, once I settled into my residence on Dizengoff Street, with its cafes and chic boutiques, the city’s natural energy started to take hold and I realised that I was in a unique spot for studying the language. I had arranged for a 30-hour intensive course and each day my teacher, herself born in Tehran, came brimming with notes on Farsi conjugations, vocabulary and poetry. During my conversations with her, I started to gather insights into the lives of Israel’s Persian Jewish community. For many of those who came after the Islamic Revolution, adjusting to Israeli life proved to be anything but easy. There were language and cultural barriers, that are often more difficult to overcome since diplomatic relations with Iran are buried under permafrost. However in 2005 after former Iranian President Mahmoud Ahmadinejad made his notorious comments about “wiping Israel off the map”, interest among Israelis to learn Farsi took off and through this many became acquainted with the words of Hafez and Rumi, and the enormous impact of Persia on Jewish history.

While in Tel Aviv, I wanted to have an immersive experience and thus made it my mission to seek out all the Persian elements that the city had to offer. I met fruit juice vendors, cab drivers and coffee shop owners all enthusiastic to practice their mother tongue with me. Other Israelis meanwhile paid little attention or never even batted an eyelid.  With my head a buzz with the words I learnt in class, any attempts I made to speak Hebrew in shops or cafes, normally left me stammering, as Farsi words pushed their way to the top of my tongue. Even as I took buses along Tel Aviv’s bustling streets, passengers took no notice of myself and my teacher’s Farsi conversations, although it did feel decidedly strange. Slightly incongruous. You would forget that Israel is home to an estimated 140,000 Persian Jews, and many have assumed important roles in the military and the government. Perhaps the most high profile examples are the country’s former President Moshe Katzav and the former Chief of Staff of the Israel Defense Forces Dan Halutz. Pop singer Rita Yahanforuz, or Rita has helped to generate enormous publicity about the desire of Persian Jews to celebrate their cultural heritage through music.

On a sweltering day, my teacher and I headed to the Levinsky market in South Tel Aviv. It is famous for its small Persian bazaar, and my teacher encouraged me to speak with the elderly Persian bazaaris to talk about the food they sell. Everything from chickpeas to pistachios imported via Turkey can be found. Afterwards we headed to a small restaurant, where sun bleached pictures of the former Shah and Shahbanu hang on the wall. While we tucked into plates of gorme sabzi and joojeh kabab, you had to blink while looking around to remind yourself that you are in Israel, Iran’s arch enemy in the Middle East. In this self-contained little world, the politics and blustery rhetoric of Benjamin Netanyahu or Ayatollah Khamenei could not seem further away. What I found on the other hand was a genuine curiosity from Iranian Jews to know what Muslim Iranians think of them, since so many have rich and joyful memories of life in Iran and of times when religion was irrelevant.

On my last day, in a mad rush to reach the airport on time, a cab driver left me in a state of shock when he informed me that the journey would cost 1000 Shekels ($300). I sat sullen and disheartened that a visit that had been so eye-opening and edifying would be dashed by personal financial ruin. Since his English was so poor, I tried to see if he knew other languages. When he told me he spoke parsit, all confusion was cleared up as he actually meant one hundred, not one thousand, and perhaps in that moment, never could I have been more grateful to speak a little Farsi.

About the Author
Emily Boulter is a Rotterdam-based writer and researcher. She produces the current affairs blog From Brussels to Beirut and has written for a number of publications in both Europe and the US.
Comments