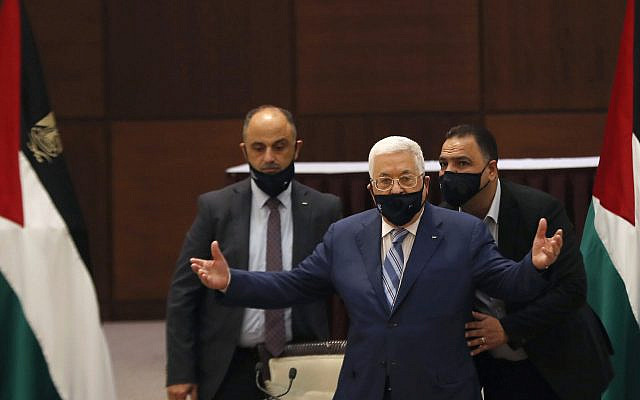 Palestinian Authority President Mahmoud Abbas gestures during a meeting with the Palestinian leadership to discuss the United Arab Emirates' deal with Israel to normalize relations, in the West Bank city of Ramallah on Tuesday, Aug. 18, 2020. (Mohamad Torokman/Pool Photo via AP)

The Times of Israel revealed Sunday that Emirati officials sought, and successfully received, assurances that during their negotiations over normalization of ties with Israel, the US would not permit Israel to annex any parts of the West Bank until January 2024 at the earliest.

When the Emiratis and President Donald Trump said the annexation was “off the table” for now and Benjamin Netanyahu insisted that annexation was still “on the table,” both sides were technically accurate.

The Emiratis wanted a tangible win for the Palestinians to give them time to prepare their pragmatic response to the Trump peace plan; to stop Israel from annexing the Jordan Valley, which would cut off a future Palestinian state from Jordan; and, equally important, to give Palestinians time to put their house in order in preparation for final and historic negotiations with Israel and the United States.

Nonetheless and, fortunately, a lot can happen between now and January 2024. The US commitment is not an empty promise. If President Trump wins a second term, then this US commitment is significant to deter Israel from moving forward with annexation. True, there is no guarantee that President Trump will be reelected this November although he has been narrowing the lead that Democratic Presidential Candidate Joe Biden had over him earlier in the summer. But, if President Trump loses, then Joe Biden is on record opposing Israel’s annexation of the West Bank.

Keep in mind, as well, that despite Netanyahu’s unyielding promise to (eventually) carry out the annexation, his leadership has an expiry date. Eighteen months into his current premiership, in November ‘21, Netanyahu will no longer be Israel’s prime minister, according to his coalition agreement with Blue and White. Alternatively, should the corruption cases against him prove damning in Israeli courts, Netanyahu could be behind bars, away from the political spotlight and his right-wing powerbase. There is little doubt that in Netanyahu’s absence, Israel’s extremist right-wingers will weaken considerably and the path to peace negotiations with the Palestinians might become easier.

And crucially, the hearts and minds of those living in the region are trending, overwhelmingly, in favor of the creation of a Palestinian state. Consider the following:

Sadly, the Arab Peace Initiative of 2002 produced no progress. But the leaders of the UAE have judiciously bought the Palestinian people precious time from the greedy Netanyahu and the failed Palestinian leadership. The time between now and January 2024 should be used wisely by, hopefully, a new Palestinian “leadership.” The current ineffectual leadership resorted to issuing hollow threats, starving its people by refusing to accept the tax money collected on its behalf by Israel, or firing useless and ineffective missiles.

The price of normalization: 50 demands

The Palestinians should wake up and face reality. They should embrace a new strategy — a Machiavellian approach – that leverages the bargaining power of the Arab and Muslim countries.

These concessions could include: The immediate freezing of all settlement activities in Palestinian areas; an agreement on the status of East Jerusalem and the holy places; the return of Palestinian refugees of 1948 and 1967 to the newly created state; the right of the Palestinians to control its natural resources and to trade freely; their right to control their borders and airspace; and the building of highways and airports linking Palestine to the world.

If the current Palestinian leadership were smart, it would reverse engineer the building of a state, with the help of Arab and Muslim countries, instead of putting forth demands that would guarantee the ultimate result beforehand when they are the weakest party around the negotiating table.

That is creative thinking and seizing the moment; That is vision and strategy. That is what is entirely lacking in the current Palestinian leadership.