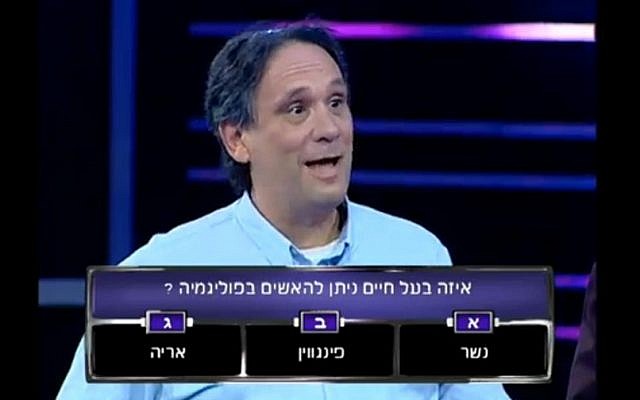 Micha Odenheimer knew that lions, not penguins or eagles, were polygamous, and hence he won more money than a South Asian villager earns in a year. (image from Ehad Neged Meah game show)

There is a falafel stand outside the building in which I work and, often as not, that’s where I grab my lunch. Usually I am an anonymous part of a motley crowd squirming towards the counter, and yearning for the gruffly spoken but longed for words “pita or lafa?”

A few days ago was different. That day the young man behind the counter looked at me with wonderment in his eyes and said: “I saw you on ‘One Against a Hundred’.”

“Oh, thanks’, I said, not sure if ‘thanks’ was the appropriate response.

The wonderment was momentary – the gruffness immediately returned. ‘Why didn’t you keep going?” the young man demanded. “You dropped out too soon!”

The night before, he, along with quite a few thousand other people, had seen me as the primary contestant on the Israeli game show, Ehad Neged Meah – One Against a Hundred (known in the US as “1 vs. 100”), which is shown in prime time on Channel 2, Israel’s most popular and wealthiest TV station.

The rules are fairly simple: one person, standing on an elevated platform in the midst of a large studio, faces a hundred seated contestants in a staggered, Hollywood squares type of structure. Both they and I had to choose answers to multiple choice trivia questions. The “One Hundred” got to answer first, pressing a button on the desk in front of them. Then I answered, after a little chitchat with the host, Israeli “television personality” (a precise if mysterious description) Avri Gilad – an edgier version of Jeopardy host Alex Trebac. The game progressed from 100 shekels to 5,000 shekels; if I got the answer right, I won that amount of money multiplied by the number of people among the hundred who got it wrong. 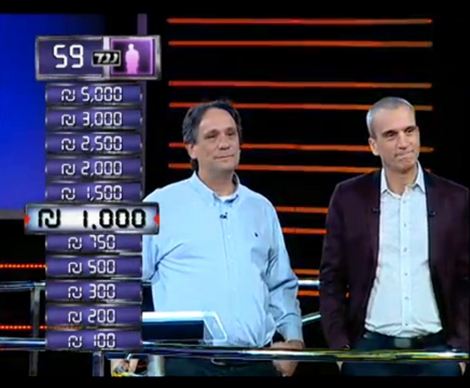 Micha Odenheimer (left) on the One against A Hundred game show, ‘Do-Gooder’ episode

My journey towards my (literally) 15 minutes of game-show stardom began because of Reut, a young woman who, after completing her army service at Galei Tzahal, Israel’s army radio station, had volunteered in Nepal with the organization I founded, Tevel b’Tzedek (now just Tevel in English). In Nepal (we also work in Haiti, together with our partner there, Israaid) we work directly with impoverished communities that are in crisis because they are not growing enough food and have limited access to education, sanitation, clean water and health facilities. Led by our full time local staff, including our Nepali director, Bishnu, who holds a PhD in Plant Science from Ben Gurion University of the Negev, we help ramp up their agricultural production using organic methods; organize their youth, women and farmers into groups that can then transform the village with their energy and idealism; and introduce new techniques in areas as diverse as sanitation and early childhood education.

Reut had volunteered in a village where most of the population made their living dragging stones from a nearby river and crushing them into pebbles to be sold to companies making building materials. She had lived, together with other volunteers from Israel and the Jewish world, in a hut with no indoor plumbing and only intermittent electricity that sometimes powered a single bulb. Now she was back in the flashy world of entertainment media.

When Reut heard that “One Against a Hundred” was planning a show in which all the contestants were certified do-gooders, she suggested they try me out, and after two sessions of trivia tests in my office, I was invited to be the “One.” Among the “One Hundred” were people whose deeds inspired awe – a young man who gave away a kidney to a stranger; the founder of Marak Levinsky, which has served thousands of meals to African refugees Tel Aviv’s Lewinsky Park; an elderly man who gives his entire salary to help feed poor families each week (he lives off his pension).

Backstage, several young women (Reut was no longer with the show) prepared me by explaining the rules and helping me with strategy. The key was in knowing when to quit, because if you miss one question, you lose all your winnings and are out of the show. There are two opportunities to ask for help from the “One Hundred,” so the advice was to never quit before you’ve used up the “help” cards – and to quit once you have.

There was also a difference of opinion about my attire: Should I wear the navy sports coat I had brought with me or go in just shirtsleeves? The woman who wanted the shirtsleeves won out.

Up on the stage, Avri talked to me about Tevel, eventually popping the inevitable “Aren’t there enough poor people in Israel” question.

“It’s not an either/or,” I told him. “The kids that make volunteering part of their post-army trek come back to Israel full of motivation to change their society and confident that they can do it.”

That’s only one of the five answers I have to that question – in fact, I think that global poverty is everyone’s responsibility and everyone’s problem, especially today when our economies are so intertwined that we have Nepalis (Filipinos from India, as Israelis call them) taking care of our aging parents or grandparents.

Jackie Mason once quipped: “I have all the money I need for the rest of my life – unless I have to buy something.” In the same vein, the questions I had to answer were easy – except for the ones I didn’t know. I moved deftly through the easy initial ones – I knew that Ahashverous and not Antiochus reigned in Tehran, and that lions, not penguins or eagles, were polygamous. The ones that I didn’t know came later: “How does Shelly Yachimovich begin all her Facebook messages?” was one. And then: Was it Begin, Olmert or Peres who said “Television makes dictatorship impossible and democracy unbearable.”?

With some luck and the aid of my two “helps” I got through the questions to which I didn’t know the answers (Labor party chair Yachimovich always starts with “Hi, this is Shelly,” and the TV quote was Peres, of course). And then I got out in time – quitting before I missed one, with my winnings intact. To find out how much I won, you are going to have to watch the show (online at the Channel 2 website). Now what remains is to reflect on the experience.

Why did I go on the show? Obviously it was a chance to publicize Tevel work. But did being on a trivia quiz show trivialize Tevel? Or enhance its standing? What does it mean to play for money – to play with money – when a right or wrong answer to a random question could bring me more money than the annual earnings of the vast majority of South Asian or African villagers?

And along with that, a lingering, troubling doubt, the falafel man’s question: Maybe I did, in fact, drop out too soon?

About the Author
Micha Odenheimer is a journalist, rabbi, and social entrepreneur. Micha founded the Israel Association or Ethiopian Jews, the first advocacy organization dedicated to changing absorption policies, and Tevel b'Tzedek, an Israeli organization working with impoverished subsistence farmers in the Global South. Micha has written for numerous publications, including Haaretz, the Washington Post, and the Jerusalem Report from Ethiopia, Somalia, Iraq, Burma, Bangladesh, Indonesia and other countries.
Comments