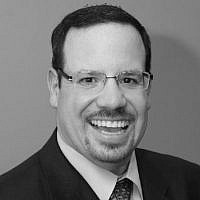 The Blogs
Ira Piltz
Apply for a Blog
Please note that the posts on The Blogs are contributed by third parties. The opinions, facts and any media content in them are presented solely by the authors, and neither The Times of Israel nor its partners assume any responsibility for them. Please contact us in case of abuse. In case of abuse,
Report this post.

Apparently, I owe the world an apology.

To begin with, I am a white American Orthodox Jewish Democrat. I also hold Israeli citizenship and tend to trend to the moderate right on Israeli politics.

Practically speaking, this means that I am responsible at some level for everything wrong with society at large and with Israel and the Jewish people. Basically, my sheer existence offends everyone at some level.

However, before reading my social media feed on Thursday morning, I did not realize that my gender made me responsible for the systemic oppression of one half of the Jewish people. An article by Jennifer Geretz (“Jewish Women-We Withdraw our Consent“), informs me that, as a male, I am responsible for such behavior.

I thus discovered a painful truth: I am an affront to the religious development of all Orthodox Jewish women.

Once I realized this, I felt really bad. I called my wife to explain this and apologize. She called the doctor to schedule me an appointment and suggested that I lay down for a few minutes before my morning court call.

I then tried explaining this to my 4 daughters. The older two gave me a “nod and smile” while my middle one colored and my youngest asked if I could make her another waffle for breakfast.

So where does that leave me?

Well, let’s see…I am an attorney (probably another strike against me) who regularly represents the Jewish community on issues of importance. I was one of the first attorneys in Illinois to litigate a case allowing women to express themselves religiously when dealing with the issuance of state ID’s.

I am also the father of 6 beautiful children, 4 of whom are the aforementioned girls. I encourage them to read, think, question and explore those parts of the world in which they show interest. My oldest (who aspires to practice law — maybe she’ll give me a job someday) accompanies me to court and watches me at work. My 8 year old, who loves dance and soccer, studies dance and plays soccer.

How about that? Does that help?

I am a husband to the world’s greatest rock star of a wife, whose wisdom and counsel are the single most important reason that I get anything right in the course of a day. I stand with her, support her choices (offering my counsel when sought) and thank G-d several times a day for the fact that she is my life partner.

But wait, there’s more…because here comes the bad part…My wife does not wear Tefillin. Granted, she does not want to. (I think that the sheitel is enough. I keep offering to trade with her, especially as my bald spot keeps growing, but she politely refuses).

Our daughters attend an Orthodox Jewish day school that teaches Judaic studies and secular studies at a rigorous level. Ask any of my girls a question on what they are learning and leave about 20 minutes for the answer. But…wait for it…this school does not offer them a Talmud class.

Nevertheless, they are happy. Am I depriving them? Am I oppressing them?

Finally, in our home, my wife and the girls light Shabbat candles every week while I lead Kiddush.

Yes, it’s true, Officer. My wife and daughters will probably not read from the Torah in our synagogue and probably will not wear Tefillin or seek to become rabbis. I cannot tell you what my daughters will do when they are adults (heck, I can’t tell you what I am doing as an adult!) but I think that this will remain consistent.

Oddly, enough, neither my wife nor my daughters feel oppressed.

They do not dress in robes that cover them from head to toe.

Their smiling faces adore pictures all over our home (as well as our phones, my office, my upcoming website and the walls of several loving grandparents).

They also have college funds…which I hope will allow them to study whatever they want wherever they choose to study!

So wait a minute…maybe I am not so oppressive…

I am so confused now…perhaps I should just lie down for a moment.

The foregoing is a bit melodramatic, I admit, but I hope that it makes a point: To blame every Jewish male for the issues that exist in Orthodox Judaism is like blaming every person who ever bought a Chevy for the recent recall crisis at GM.

Certainly, there are issues with how women are treated in the Jewish community. To say otherwise would be to ignore the obvious.

At the same time, there is a lot more going on. There are also issues with how children are treated and educated. There are issues with the expectations placed upon members of Jewish communities that are often unrealistic for them to live up to, leading to alienation and dysfunction.

Putting this all together, there is an overall issue of how the Orthodox Jewish community will weather all of these issues and come out on top.

In my mind Ms. Geretz’s article highlights two issues from which all of this stems:

First, we are not educating our children with regard to understanding their tradition. We are not helping our children understand that each of us has an important role to play in the world at large and in the smaller role of our Jewish world. That role is defined by a myriad of variables, but it does not in any way diminish the contribution that one makes in the world.

Said another way…I am unable to give birth to a child. It’s not going to happen. Does that mean that my contribution to their life as a parent is any less? Sure, it may be a different relationship than my wife has with our children, but it is no less important to the child. Both healthy parental relationships should benefit them.

The other issue can only be stated bluntly. Here goes:

As an Orthodox Jew, I believe that G-d gave the Torah at Sinai, both in written and oral form. Learned individuals then transmitted this through the generations.

Now, it is entirely possible that there are those who twist these concepts to fit their sociological needs. Sadly, this is true in many areas and it’s often true when mortals are left to interpret the divine.

Unfortunately this leads to the crazy extremism that we witness today…a crackpot spitting on a defenseless girl (in my mind, an action that should be a capital crime) or a truly terrifying trend within some elements of Jewish society seeking to eliminate any female presence from the world at large in some stab at “morality” and “purity”.

To me, this type of extremism is just as dangerous.

I am NOT saying that women should stay home, have babies, and then get jobs to support their Kollel husbands while never serving in any public role. Anyone who thinks that I am saying that is simply dumb.

What I am saying is that Torah Judaism creates a role for everyone in society and does not state that one role is more important than the other. The “assignment of status” is a human construct.

So, when I read an article that purports me feeling bad for making a bracha, when the reason for such a bracha has nothing to do with the denigration of any gender, I tend to react strongly. When I read that Jewish women are being denied an education, I’d like to throw my set of Dr. Nehama Leibowitz sefarim at someone and ask them to meet my daughters and their classmates for a discussion on the weekly Parsha or on Halacha.

Here’s the point: it’s time for all extremists to get off the stage. Your 15 minutes are up. Please leave…now.

If you want to withdraw your consent to something which I don’t think you fully understand, feel free.

I’d rather work to address the issues in a manner that will long outlive Jennifer Geretz’s rant.

About the Author
Ira Piltz is a resident of Chicago where he practices law with the hopes of someday getting it right. He is happily married to his wife, Beverley, and together they are raising six beautiful children and a turtle.
Related Topics
Related Posts
Comments