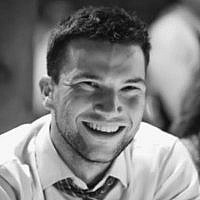 The Blogs
Razi Hecker
From Harvard to the IDF to Yeshiva, going where life takes me
Apply for a Blog
Advertisement
Please note that the posts on The Blogs are contributed by third parties. The opinions, facts and any media content in them are presented solely by the authors, and neither The Times of Israel nor its partners assume any responsibility for them. Please contact us in case of abuse. In case of abuse,
Report this post.

Ari hummed the Mantra to himself as he walked to the supermarket across the street. Not that it was literally across the street, as it was probably more like a five-minute walk, or even six when taking the new construction into account. But when he found himself explaining “where he bought groceries” to a cute girl last Shabbat dinner, he realized it was probably cooler to say that there was this great place across the street, even though, as already mentioned, it was a far cry from that.

Well, maybe some oatmeal too because I already ate like 1/3 of my roommate’s and don’t want him to realize, cause then who knows if he’ll also remember it was me that ate half of the dates he just brought.

The mantra expanded into a fully formed thought, not necessarily because Ari had forgotten about the oatmeal before, but more likely because he was already about four minutes into the six-minute walk and simply had more time to contemplate exactly what he would do in two minutes from then. Well, two minutes and one road-crossing, as he was now waiting for the light to turn green—finally, and quite literally, across the street from the supermarket.

Past dilapidated produce stores, peeling blue signs, and a memorial to some assassinated Israeli Prime Minister, the bus had started barreling down the street. Barreling, because that’s what busses in the Middle East tend to do, and thus not terribly noteworthy. To be frank, there was almost nothing at all particularly memorable about the moment. Ari had stared at the same dull red light of this exact traffic light tens of times before, feet tapping as the color obstinately stayed the same hue, still prohibiting him from crossing a street to a supermarket he was still having trouble defining to cute girls at Shabbat lunches. In general, Ari had been realizing there were increasingly more and more things he was having trouble defining to cute girls at Shabbat lunches. From his evolving relationship with his dad over the last two decades to why reading, or thinking about reading, was a better use of his Saturday morning than going to talk to God, or thinking about talking to God, or thinking about thinking about talking to God while talking to girls. But back to our story.

That is, until it hit a cement block about three and a half feet to Ari’s left. The wheels were lifted off the ground suddenly, spinning for a moment in midair, before replanting their rubber on the ground. Something done so quickly, to the extent that the driver must have thought he’d run over another damn cat that clearly hadn’t internalized that “barreling down the street” was what busses in the Middle East tended to do, and thus hadn’t moved out of the way in time. But for Ari and V-necked boy—who was standing considerably closer to the could-have-been impact—the bus seemed to loom larger than life, a momentary anthropomorphic tsunami, suffering from a mid-life crisis and deciding whether to recede.

The V-necked boy looked curiously at the cement block that the bus had hit, his eyes darting from the grey granite to the whisps of disappearing smoke generated from the friction. In that moment, the boy’s glance was clear, unmistakable. Well, it might have had a bit of a range, anything from “wow that bus was close” to “me and the boy standing two feet to my right could have shared the same two-inch blurb in tomorrow’s obituary section”. Ari paused. Admittedly, in fact, the range was quite large, and largely dependent on the boy’s philosophical tendencies, nihilistic outlook, mental-math abilities when calculating physics vectors in tandem with force, and most importantly, whether he knew which Israeli newspapers published daily obituary sections.

Regardless, this is what stood out to Ari. As someone with generally high philosophical tendencies and at least a daily changing existential outlook, the bus’s second-long skid across the concrete block challenged him in more ways than one (although admittedly did not challenge his mental math abilities, as he hadn’t paid much attention in twelfth-grade physics). Ari couldn’t shake the idea that both he and the V-necked boy could have been part of the same article printed that day. That two families tens of thousands of miles away would spend their entire lives undoing a concrete block that stood one-and-a-half or three-and-a-half feet away from their respective sons, without ever having known the same exact distance. That is, Ari reckoned, unless the bus had managed to correct itself after two-and-a-half feet, in which case that extra distance would be fit tirelessly into the words of thanks of one family in a Philadelphia suburb while inevitably endless in the cries atop a young boy’s grave somewhere in a country far too small to contain so much sadness.

How many other things could be changed by those two feet? How many lives had God upended because of such an insignificant geometrical matter, how many lives restored by something similarly as trivial? How could Ari go back to planning his life, from worrying about how many oatmeal packs he would need to buy to replenish his roommate’s stash, to how to best phrase his next conversation with the newest cute girl at Shabbat lunch. How many goodbyes would he say in his head to his mom, to his best friend, to his brother the next time he noticed he was standing within a five-foot radius of a misplaced concrete block?

How many hellos would he say to God? Or maybe just goodbyes, mixing in with an increasingly complex belief in Him.

The V-neck boy’s eyes glanced away from the concrete block, back toward the light which was now flickering with an almost intense shade of green. As if by a miracle, the cacophony of honking cars and barreling busses came decisively to a halt. The vehicles now waited patiently for him to cross the street, drivers taking the looming red glow facing them into sudden account, neglecting to think about God, families living thousands of miles away, and Israeli newspaper obituary sections.

Ari didn’t have the same privilege.

Attempting to push the thoughts aside nonetheless, he forced his left foot to take the first step.

About the Author
After finishing his B.A in Near Eastern Language and Civilizations at Harvard University, Razi moved to Israel and soon after enlisted in the IDF's Research Intelligence Unit. From religious angst in high school, wearing tzitzit in college, navigating Tel Aviv and the army, and even (currently) learning in Yeshiva, Razi uses creative short stories as a mouthpiece to express his struggles, thoughts, and goals.