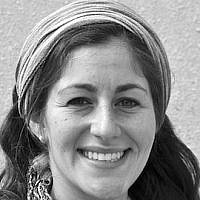 The Blogs
Debbie Rosenzweig
Apply for a Blog
Advertisement
Please note that the posts on The Blogs are contributed by third parties. The opinions, facts and any media content in them are presented solely by the authors, and neither The Times of Israel nor its partners assume any responsibility for them. Please contact us in case of abuse. In case of abuse,
Report this post.

On Yom Hazikaron, I walked into my 7 year old daughter’s room to find her secretly scribbling  a Yom Ha’atzmaut card. In royal blue marker, she drew an Israeli flag and wrote in freshly-literate Hebrew:

“Happy Yom Ha’atzmaut to my family! I wouldn’t live in the Land of Israel if you hadn’t left your mommy and daddy…” 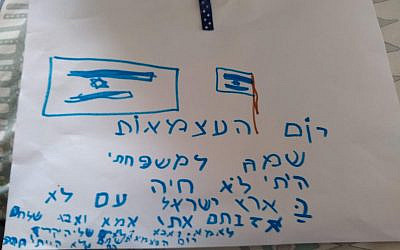 First, I marveled at the fact that my daughter feels most comfortable reading and writing in Hebrew, an ancient language that was completely foreign to me not so many years ago. Then, I looked up at her deep, shining eyes, her festive blue and white clothes, her wise smile, complete with two big kid teeth. She gets it. She somehow understands that when I picked up and moved my naive 19-year-old butt across the world, tearing myself away from my parents, siblings, and lifelong friends, I was motivated by the hope that my future children would never have to do something so heartbreakingly difficult. Tears in my eyes, I gave her a long hug, then quickly snapped a picture of the card and got back to packing.

Because as Yom Hazikaron bled into Yom Ha’atzmaut, we would be dancing under the stars with a bunch of other wild hippy Jews who also moved across the world away from their mommys and daddys to live out the Jewish people’s love affair with their ancestral homeland. We would spend the next day and a half singing, dancing, praying, drinking, eating, camping, and laughing at a music festival on our friend’s farm. Usually, the land is full of greens, but this year is the seventh year, when the Jewish people are commanded to let their sacred fields lie fallow in accordance with the biblical laws of shemitah. During the last shemitah cycle I became a mother, welcoming my precious sabra daughter to the world, and now she was writing me cards in hieroglyphics and validating my most difficult life decisions. 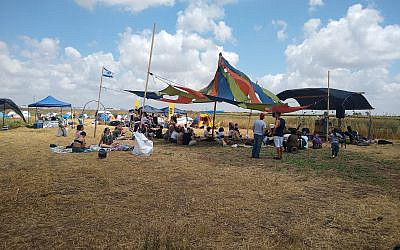 Just a few days later, as we finally got our kids to sleep, sirens pierced through the illusion of a regular evening, and a muffled voice on a loudspeaker ordered all residents to immediately go into their bomb shelters, close the windows, and lock the doors until further notice. We frantically transformed our cozy home into lockdown mode, as the messages flooded our phones:

Terrorist infiltration into the yishuv. No, into someone’s home. One dead. The terrorist. Another three fled the scene. No, wait, there was just one. Stay indoors.

My husband struggled to lock the door to our house, frozen stuck from lack of use. Along with most of our yishuv, we never lock our door, living under the now-shattered illusion of safety. As he frantically sprayed WD-40 into the lock and I sat nearby glued to the misinformation streaming into my phone, my two-and-a-half year old son wandered out of bed into the bathroom.

“Do you need to pee?” I asked him, my voice unusually sweet and calm for any post-bedtime escape, nevermind this one. “Need a wipe,” he answered, searching around the bathroom like a lost drunk. That’s when I realized that he was completely covered in blue marker. Royal “Flag of Israel” blue marker that had been left behind on the bedroom floor in the mess of packing days before and somehow ended up in his mischievous hands after hours. 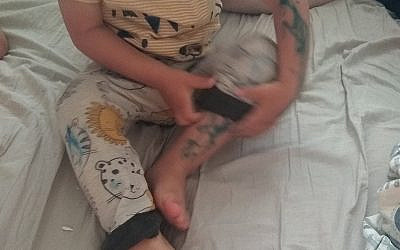 I looked around at my house, blinds drawn shut, remnants of dinner all over the dining room table, a small puddle of pee on the floor, crumpled up Yom Ha’atzmaut paraphernalia piled onto the couch, duffels and camping gear waiting to go back into storage until the next adventure, a fresh, bright bouquet of yellow Mother’s Day tulips, my son painted blue, and my husband, struggling with the lock to keep a murderous, armed, 17-year old Palestinian terrorist out of our home.

There was a loud knock on the door, the sounds of heavy footsteps and manly voices, floodlights shining through the cracks between the blinds. Security forces were scanning the entire yishuv to make sure there were no more terrorists and that everyone was okay. Ha. Okay. The soldiers were going house to house, checking every home and yard.

They went to our neighbor’s house on the next street, where a Druze soldier with a heavy Arab accent scared the shit out of everyone. And they went to our neighbor’s house a few streets away where exactly three shemitah cycles ago to the day, on May 8, 2001, in the heart of the Second Intifada, as if an intifada has a heart, Palestinian terrorists turned the sacred rocks of this holy land into deadly weapons. Two 13- year-old boys who skipped school to go for a hike in the canyon were stoned to death, and a naive mommy and daddy who left their mommies and daddies across the world to fulfill ancient dreams found themselves in an eternal nightmare.

I carefully opened the door to see a very cheerful young man with long payot, a big smile and a bigger gun, “We’re just going to search the yard,” he informed me, as if he may find chocolate Easter eggs hidden somewhere between the unkept grapevines and the dusty bicycles.

I sent my son to sleep, cleaned up the house, and got into bed. “I should set my alarm for a little bit earlier than usual,” I thought to myself, “I’ll need to clean Sadeh up from the marker and explain to the girls about how there was a miracle last night and a terrorist tried to kill them but we got him and everything’s okay but also not okay before they hear about it from their friends at school.”

About the Author
Debbie made aliyah from Toronto in 2008, and currently lives in Tekoa with her husband and three children. She has a BA in Jewish History and Jewish Philosophy from Bar Ilan University and works as a freelance content writer. She loves swimming, writing, hiking, and all forms of people and potatoes.
Related Topics
Related Posts
Comments