The Blogs
David Zachary Sidman
Apply for a Blog
Please note that the posts on The Blogs are contributed by third parties. The opinions, facts and any media content in them are presented solely by the authors, and neither The Times of Israel nor its partners assume any responsibility for them. Please contact us in case of abuse. In case of abuse,
Report this post.

Here’s a hypothetical question for you- If a community of secular Jews in 1938 Germany was being sent to the gas chambers while a community of Haredi Jews was spared from the same fate, would the former complain that it’s not fair that only they have to die? Or would they realise that the fewer Jewish deaths, the better. 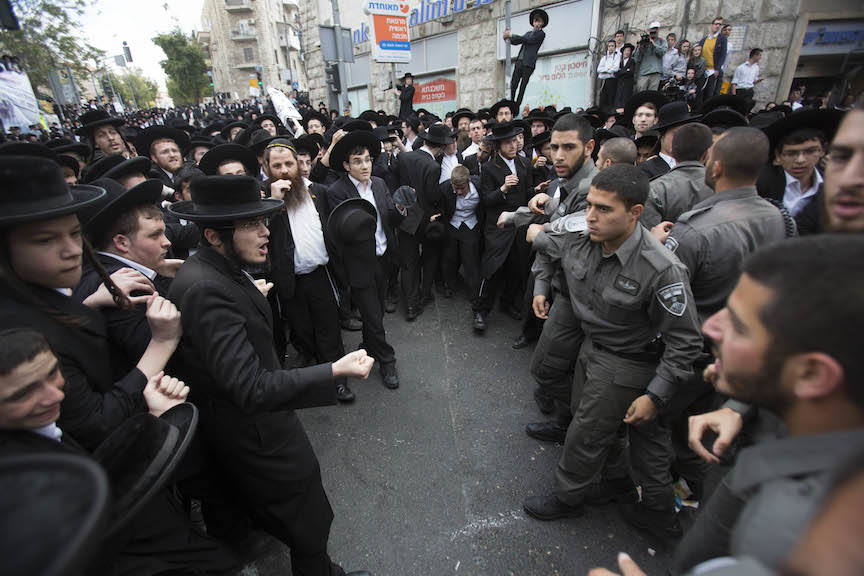 Now I realize that the example I gave is extreme and I would never in a million years compare the IDF to Nazis, but a similar parallel can be found between the draft dodging Haredi protesters and the sentiment of those who oppose them. That’s because the sad truth is that more Haredi soldiers in the IDF is a lose-lose for both the Haredim as well as Israel as a whole. That’s because all it will do is cause more unnecessary soldier deaths at the hands of a scared, broken military that is led by people who are afraid to fight with conviction and are petrified of winning wars.

At this point, you may say to yourself that if everyone refused to serve, there would be no army and no defense for Israel. Although true, there’s a big difference between a protest by currently enlisted military personnel and rewarding a corrupt military with more sheep to the slaughter house.

Why do I use such a harsh analogy? Because for many opposed to the protests, it’s largely irrelevant that we have an army who gives their enemies a 15 minute warning before eliminating them (giving them ample time to escape imminent death). They don’t care if Tzahal unnecessarily risks the lives of its troops by abiding by cease fires while under fire behind enemy lines. And so what if infantry men are prosecuted in a show trial for killing terrorists who just moments earlier almost stabbed their fellow soldiers to death. What difference does it make that the upper echelon of the IDF uses our troops as pawns unnecessarily risking their lives to avoid condemnation from a bunch of anti-semites in the UN (how’s that working out by the way?). All that matters to the pro-draft crowd is fairness for the sake of fairness.

What’s important to the pro-draft crowd is that the Haredim should allow their sons to unnecessarily die in wars with their hands tied behind their back just like their sons do. Otherwise, it’s just not ‘fair’. The problem that most people fail to realise is that a million new Haredim in uniform won’t improve Israel’s security so long as Israel is afraid to fight wars and win them. And that’s precisely the problem and it should be the only problem that those who care about Israel’s security focus on.

Our frustration needs to be directed at those who send commandos onto Hamas affiliated flotillas with paintball guns. Our anger should be directed at the same military who can’t seem to scrounge up the money to insulate military vehicles with bullet-proof armour or provide kevlar vests to those on the front lines, yet magically figured out a way to fund sex change operations for trans soldiers while dishing out 700,000 NIS to hire Elor Azariya’s prosecutor. (The list goes on and on but I’d rather not turn this article into a novel).

As Haredi draft dodgers take to the streets to protest the draft, the push-back from the Israeli public has been loud and clear. Most Israelis believe that the Haredim should serve like the rest of us (except for Israeli Arabs). However, the problem with the anti-draft dodging sentiment isn’t the principle but rather the priorities. That’s because when Haredi draft dodging protests cause more of a controversy than an army who refuses show up to battle, we have a big problem. Our rage shouldn’t be directed at the Haredim, but rather at those who needlessly play Russian Roulette with the lives of Israel’s finest men just to get a pat on the back from the New York Times. Once the broken army is fixed, we can then talk about the draft dodgers.

About the Author
David Sidman is a candidate in the Zehut political party, Israel activist and contributor to Shoebat.com. He is also a professional dog trainer. You can follow him at @theIsraeliShow
Comments
Advertisement