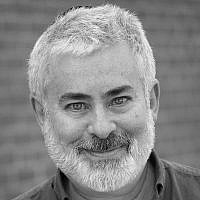 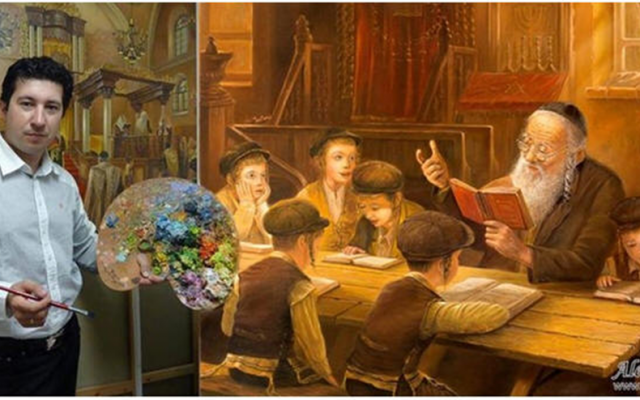 Alex Levin at his studio in Jerusalem and two of his paintings that were banned.

Alex Levin is a Ukrainian-born Israeli artist who employs a mixture of mediums to create luminous depictions of Jewish life both religious and secular.

Fans of the 46-year-old painter’s evocative works have included the actor Richard Gere, the singer Madonna, and the late Ezer Weizman, the former president of Israel.

Levin has exhibited his paintings in galleries and museums around the world and has had several solo shows at the Knesset.

The Jewish-themed artist has had his increasing popularity significantly bolstered by being on social media.  At the same time he has attracted the attention of virulent antisemites outraged by his aesthetic expression.

Seven years ago, as Alex Levin’s fame picked up, he started receiving vicious emails and posts, Gene Levin, the Manager of his brother’s businesses, stated in an interview.  They were in general antisemitic and many of the messages specifically fixated on Alex’ portrayal of the Judaic component of Jerusalem.

Levin continues to be the target of these haters in a concerted effort to end his online presence.

Google Shopping is a subsidiary of the Tech behemoth.  It provides a commercial service that enables customers to compare prices amongst competing websites and make purchases.  For the past three years, Alex Levin’s paintings have been offered through the Google site.

Abruptly, on May 14 of this year, Google Shopping blocked Levin from selling 61 of his paintings.  The reasons that the site gave are preposterous in light of what the artworks actually represent.

A prime example is Levin’s painting entitled “Jerusalem, the place chosen by God” which portrays an abstract cityscape of the Old City teeming with energy.   Google claims that it violated their policy regarding “Partial nudity”. 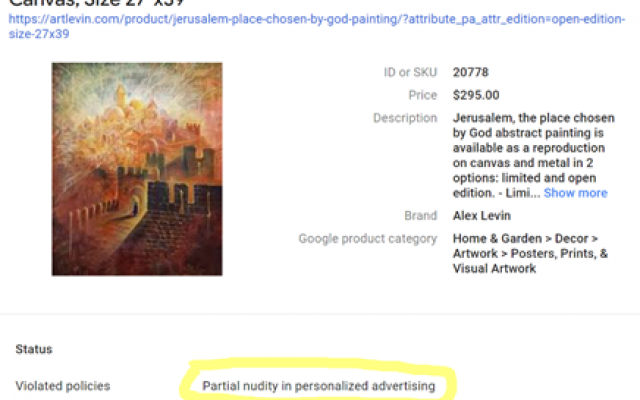 Levin’s “Praying with Torah” depicts a pious man wrapped in a Talit reading a prayer book before a Torah placed on a Bimah (lectern) with light streaming in through the windows of the Synagogue.  Google forbade this painting purportedly based upon their ban against “religious belief”. 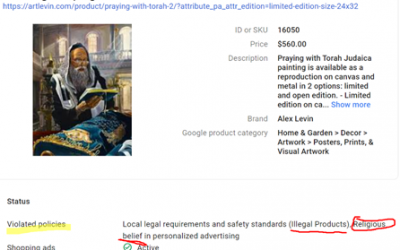 Google’s ostensible reason for banning  “Praying with Torah” is belied by the plethora of paintings offered through the site that depict, among others, Jesus, Buddha, Krishna and Whirling Dervishes.

There has not been any viable means provided by Google for the Levins to contest the prohibition.  They tried twice to no avail and then the site no longer offered them any mechanism to appeal.

Alex Levin believes that Google’s abrupt proscription of his paintings and the false reasons given are related to the attacks he has been subject to from Jew-haters.  He has good reason to think so.

In 2014, there was an intensification of the online attacks on Levin’s work for his depiction of Jerusalem as Jewish and for his failure to paint mosques in the City.

It was at this time that Facebook suddenly canceled his page on the site supposedly because the pious images he painted contained “pornographic content”.

In response to the defamatory characterization of his artwork and the consequential censorship, a campaign by many of Levin’s followers emerged in protest that sent a petition to the social networking giant.  Two eminent international jurists, Dr. Andres Obler, the Australian founder of the Online Hate Prevention Institute, and David Matas, senior legal counsel of Bnai Brith Canada, also came to Levin’s assistance under the auspices of the Global Forum for Combating Antisemitism.

The lawyers wrote to Facebook’s Vice-President for Public Policy and noted that the paintings on the page closed by Facebook for sharing pornographic content feature religious themes and showed people in modest dress.  They inferred that Facebook had been “gamed” by the “barrage of false reports” which automatically triggered an algorithm.  The lawyers further pressed Facebook for its policy regarding a check and balance of human oversight to prevent such an obvious mischaracterization.  They also asked what redress was available to the wrongly accused such as Levin.

It was soon after the lawyers’ letter that Alex Levin received a personal phone call from Mark Zuckerberg who then apologized.

It is a practical certainty that the same ploy which happened with Levin and Facebook is now at play with Google.

The proponents of a primordial hate have a new high-tech weapon. 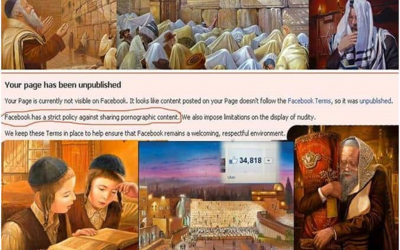 Paintings from Alex Levin’s page that had been taken down by Facebook for being “pornographic.”
About the Author
Ezra ben-Pesach is a writer, attorney, martial artist and mountain climber.
Comments