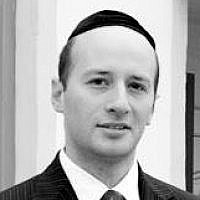 The Blogs
Eliyahu Fink
Apply for a Blog
Advertisement
Please note that the posts on The Blogs are contributed by third parties. The opinions, facts and any media content in them are presented solely by the authors, and neither The Times of Israel nor its partners assume any responsibility for them. Please contact us in case of abuse. In case of abuse,
Report this post.

MK Rabbi Dov Lipman’s vision for charedim in Israel has been summarily rejected by Charedi Leadership. He has even been called a rasha by an American Rosh Yeshiva. It seems MK Lipman’s message is not getting through to charedim in Israel or even in America.

I have a suggestion.

Don’t talk about massive overhauls and revamping the entire system. Instead, simply suggest that Israeli Charedim learn from the American Charedim.

The resounding rejection of MK Lipman and all he stands for might be reversible. It might be as easy as embarking on a slightly different marketing strategy. It seems to me that if MK Lipman would reach out to American Charedim and propose that their standard become the Israeli Charedi standard, his ideas might find a bit more acceptance in America and eventually in Israel as well.

Adapted from this post on my home blog: Not All Charedim Are The Same

About the Author
Eliyahu Fink J.D. is the Rabbi at the Pacific Jewish Center | The Shul on the Beach in Venice California; Rabbi Fink is also a graduate of Loyola Law School of Los Angeles. Connect with Eliyahu Fink on Twitter, Facebook, and on his home blog at http://finkorswim.com.
Comments