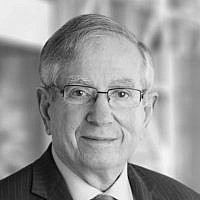 The Blogs
Judd L. Kessler
Apply for a Blog
Advertisement
Please note that the posts on The Blogs are contributed by third parties. The opinions, facts and any media content in them are presented solely by the authors, and neither The Times of Israel nor its partners assume any responsibility for them. Please contact us in case of abuse. In case of abuse,
Report this post.

Most American Jewish voters of whatever political persuasion were thankful for – and even admired – some of Donald Trump’s courageous actions regarding Israel. But generally, they also found his personality and truculent style too much to tolerate – not to mention the way he seemed to make right wing extremists feel comfortable coming out of the shadows. And then, of course, there were his actions related to the events at the Capitol on January 6. It was also before his most recent veiled threat to American Jews to wise up and love him as he believes Israeli Jews rightly do. What is ironic here is that while American Jews may still be seen by some as not ultimately loyal to the United States, it seems to me our loyalty to the US (and to God) requires that we reject those who would undermine the world’s oldest democracy – even if (and of course there is some controversy about this) Trump has helped move Israel’s position in the Middle East to another plane.

For almost two years now we have Joe Biden as our president. He is a politician, who despite many flaws, is a person of unquestioned decency. He has at least verbalized his intention to try to unite our polarized nation. He has taken a few steps in that direction, but his administration has fumbled many important issues so badly that it is likely – but not certain – that the Democrats will lose control of both houses of Congress in the upcoming midterms. But he will be president for two more years and if he really wants responsible Americans again to begin speaking of and to each other with some normal degree of respect, he will need a huge amount of help. Will he get it from the American Jewish community? I’m sorry to say that I doubt it. Let me try to explain why.

What I hear from most of my Jewish friends is relief at the departure of the former president, but without any acknowledgement of how he got there in the first place. Even if he is unlikely to return as a viable presidential candidate (still a big “if”) millions of Americans who voted for him are not. (While the issue of Black Lives Matter and excesses of police are certainly important, this article focuses on what I believe are larger long-term challenges for American democracy.)  These are largely our fellow citizens who live away from the coasts and major urban areas and who, over a period of years, saw jobs disappear often followed by churches, labor unions, fraternal organizations and other social support networks that had given them a sense of status and belonging.

I’m not talking about the Q-Anuts or the Proud Boys. I’m talking about mostly White, rural, and small-town working- or middle-class Americans who had become alienated and angry. They were sick of hearing condescending talk from Blue State politicians who had treated them as collateral damage of globalization, a process they said would eventually make us all richer. While these people stewed about being ignored, the meritocratic elite (and that includes a lot of us) dismissed them – in classic words of Hillary Clinton and other prominent Democrats as “deplorables,” clinging to their religion (understood as dumb people’s religion) and to their guns.

My question for American Jews is are we ready to engage with these people – to really listen to them based on mutual respect? Why wouldn’t we? I think that one reason is that many Jews seem to believe that our religion somehow tells us what our political beliefs should be. These Jewish voters seem to believe that they are not only “right” about major political, economic, and social issues; they also believe that they are being righteous. Some are not even willing to discuss issues respectfully with Republican or Independent members of their own congregations! That uneducated denizens of the Twitterverse might do this I can understand – but for Jews to act in this way seems to me impossible. Far from being righteous, this seems to me hideous nonsense and, I’m sorry to say, arrogance. It also displays a sad misunderstanding of our own profound religious tradition.

But wait, you say, just listen for example to the words of the prophet Isaiah in the haftarah that we read on Yom Kippur. What God wants is not a mere ritual of fasting. The fast Adonai wants is “to unlock the fetters of wickedness and untie the cord of the yoke, to let the oppressed go free…to share your bread with the hungry…when you see the naked to clothe them, and do not ignore your own flesh. (Isaiah 58:6-7) Doesn’t that make Adonai sound more like a Democrat than a Republican? A liberal rather than a conservative? Not at all.

The words of Torah and halacha are directed first to our own souls, to our families and to our communities. Those communities were often isolated and were certainly not noted for their affluence, but they were admired by many non-Jews, including people like Mark Twain, for doing a fine job of maintaining strong families, of educating our children, and of taking good care of our own needy, sick, homeless, or abandoned. So long as these needs were being reasonably met, charity to non-Jews in the larger community was also called for. Our rabbis were deeply pragmatic people, dealing with communities that they knew intimately. The values of our tradition are deep and timeless, but that doesn’t mean that being Jewish turns us automatically into mavens on the economic, health, education, agriculture, or foreign policy issues of a vast and diverse nation. It emphatically does not. The teachings of Judaism together with one’s intellect, education and experience may turn a Jew into a citizen who is learned in public policy, but that is quite another story.

The great Rabbi Jonathan Sacks, so recently taken from us, was quoted a few months ago as being critical of American rabbis for essentially advising their congregants how to vote. This, he said, he would never do himself – or allow to be done by any rabbi under his supervision. “When you mix politics and religion,” he said, “you get bad politics and even worse religion.” (The Times of Israel, 28 August 2020) Well how can that be? Did he not understand Torah? Did he not have a kind Jewish heart? Of course, he did! But he also understood our tradition more deeply – and, because of that, he was outraged to see our profound moral tradition being brandished as a political weapon.

Nowhere in history have Jews ever lived in a nation in which we were so free, so accepted, respected, and protected as in America: from George Washington’s famous letter to the Touro Synagogue to the present day. (I say this notwithstanding an increase in the foul emanations of hatred we have observed recently.)  In recognition of this precious truth, we owe it to our country to act not as a morally superior elite – but instead to seek deeply to find truth and fairness in state and national politics. We read daily as part of the Shema that “I am Adonai, your God, who is Truth.”

And what, pray tell, is Truth? It is what Jews have always sought by studying Talmud with a partner, in “chevrutah.” Why? Because if you can’t understand and respect your partner’s position, you probably don’t understand your own position very well either. Finding truth requires effort and humility – not righteous condescension. In a remarkably powerful and appropriate sermon during an earlier pre-election period, Rabbi Adam Raskin, of our Congregation Har Shalom in Potomac, Maryland, related a midrash about Adonai trying to decide whether to create human beings on the Sixth Day. Of the heavenly beings, all were in favor except two – those representing Peace and Truth. And Adonai surprisingly decided to throw Truth from the heavens, causing it to break into tiny pieces on the earth, below. Why would God do such a thing? Because he wanted men and women to use their intelligence and moral sense to pick up the “pieces” of Truth; and to recognize that it takes hard work for us to listen respectfully to the pieces of Truth possessed by others. I believe strongly that there is plenty of Truth on both sides of the Red/Blue divide. We owe it to ourselves and to America to seek it out, “to [help] bind up the nation’s wounds”, and to help America to march forward again – together.