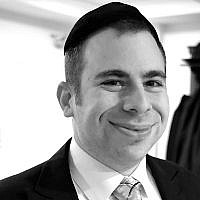 The Blogs
Yosef Merves
Forging New Perspectives on Jewish Identity
Apply for a Blog
Advertisement
Please note that the posts on The Blogs are contributed by third parties. The opinions, facts and any media content in them are presented solely by the authors, and neither The Times of Israel nor its partners assume any responsibility for them. Please contact us in case of abuse. In case of abuse,
Report this post.
I wanted to dedicate this Dvar Torah to Sergeant Yosef Cohen, 19 and Staff Sergeant Yovel Moryosef, 20, shot in a terror attack at a bus stop two days ago, and to Shira Ish-Ran, who was severely wounded and lost her newborn baby in a shooting attack earlier this week. There have been many terrorist attacks this week in Israel, and many families have been affected by inconsolable losses. My heart goes out to them, and pray that there will not be further losses of precious lives.

By contrast, Parshat Vayigash brings us a family reunion. After Yehuda’s impassioned plea for mercy, Yosef reveals his identity to his brothers, the twelve tribes are reunited after 22 years, and Ya’acov comes to Egypt and for the first time in his life, he sees all 70 of his descendants together. Our Rabbis tell us that Ya’acov said Shema at this moment of seeing Yosef again, expressing his love and gratitude and making a tikkun olam. But I am most interested in the moment when Yosef reveals his identity:

Sefer Zera Shimson asks two questions: (1) Why did Yosef ask the brothers now if Ya’acov was still alive? He had already asked about Ya’acov’s health earlier, and the brothers hadn’t returned home since then. (2) Why were the brothers so disconcerted by this question?

Yosef’s question of whether Ya’acov was “still alive” was really a question of whether Ya’acov had lost his ability to see beyond natural boundaries with Ruach HaKodesh, and if not, how come he doesn’t know where Yosef was? Yosef was unaware that when the brothers sold him, they promised each other that no one would tell, and they included Hashem in their sacred agreement, “preventing” Hashem from revealing the truth to Ya’acov. The brothers were ashamed to answer Yosef because that would have meant explaining the real reason of exactly why Ya’acov couldn’t see with Ruach HaKodesh what had happened to his son, sharing how they had even involved Hashem in their cover-up.

Rabbi Mayer Friedman explains that there was so much that the brothers did not understand about what was happening to them in Egypt, and yet Yosef answered all their questions with a simple two-word response: “Ani Yosef.” Similarly, there is much that we do not understand about world events in the history of the Jewish people and even in our own times. Yet, we also have confidence that Hashem will also clarify things for us easily in the future when the time is right, and then the big picture of all the ups and downs of history will make sense. Yehuda and Yosef were both people who knew exactly who they were and what they stood for, and my blessing is for everyone to find clarity in who they are and what they are fighting for. Shabbat Shalom!!